The national parks in the Four Corners area, known for their stark and rugged beauty by day, offer another kind of beauty at night.

A number of parks in the region offer star-gazing and astronomical programs to take advantage of the relatively unpolluted night skies. But of all the area’s parks, the darkest of the dark, at least officially, is Natural Bridges National Monument, which in 2007 became the world’s first International Dark Sky Park, a designation granted by the International Dark- Sky Association (IDA). 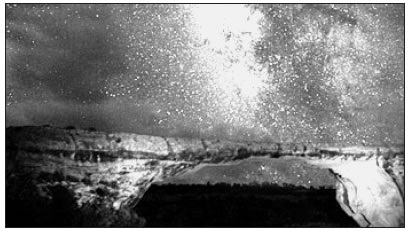 The distinction is beginning to be known by more and more visitors, according to Scott Ryan, chief ranger for Natural Bridges and Hovenweep national monuments.

“We are starting to get a significant fraction of the people coming to this park already advising they knew about the dark skies or calling to inquire about it. I’d say probably 20 percent are aware of our status as a dark-sky park.”

The monument’s previous chief ranger, Ralph Jones, was instrumental in obtaining the designation, going to Tucson to work with the IDA, Ryan said.

Parks must apply for the status and have to meet three criteria. First, “You have to have a good dark sky,” Ryan said. IDA members utilize a meter that measures ambient light. Natural Bridges was found to be a 2 on the “Bortle Class 2” scale, which ranges from 1 to 10, with 1 being the darkest and 10 having the most light pollution.

However, national parks don’t have to be absolutely dark in order to receive a listing.

“The very second International Dark- Sky Park named was Cherry Springs in Pocono, Pa.,” Ryan said. “It did not get a rating of 2, but they have several tiers of darkness so they can also promote preservation of relatively dark skies even on the East Coast, rather than just giving up on them.

“You need to have some nice darksky places back East as well. They want to encourage preservation for various stages of dark skies.”

In addition to having relatively unpolluted night skies, a potential dark-sky park must agree to retrofit its lighting to be more sky-friendly. The bulbs must be shielded, pointed down and only as bright as minimally necessary.

This proved to be little problem for Natural Bridges, Ryan said. “We’re a very small park, so there were not that many lights to retrofit.” Most of the outdoor fixtures now contain 13-watt compact fluorescent light bulbs and prevent stray light from interfering with the starry vistas.

Parks also must make a commitment to put on astronomical programs. Natural Bridges offers an astronomy program Friday and Saturday nights throughout the summer, continuing until the end of October. The program features a ranger talk and the opportunity to view through a telescope the features of the sky that interest the audience, whether bright stars, planets, binary stars, or nebulae.

“Different stars have different colors, depending on their size and heat, so people can get a glimpse of the different- colored stars that way,” he said.

Not every park in the Four Corners would qualify. Grand Canyon National Park has fairly dark skies and does offer astronomy presentations, “but it would be a tremendous expense for them to retrofit all the lights along the South Rim,” Ryan explained.

Natural Bridges, Capitol Reef and Bryce Canyon are reportedly the darkest spots in the state of Utah. Bryce Canyon has offered astronomical presentations for many years — “they are pretty much the standard for all of us trying to get our programs up to speed,” Ryan said.

Astronomy presentations are also offered at Capitol Reef, Glen Canyon National Recreation Area, and the Island in the Sky area of Canyonlands National Park. However, even these sites don’t offer the darkness of Natural Bridges. Bryce has a dim glow on the horizon from the town of Panguitch, and Island in the Sky is seeing some light pollution from the rapidly growing town of Moab.

In contrast, Natural Bridges is fortunate “to be surrounded by all this BLM and Forest Service land that won’t be developed for a long, long, long time, if ever,” Ryan said.

Hovenweep National Monument, while quite remote and dark, devotes its resources to preserving and promoting its ancient Puebloan sites rather than its night skies.

Still, officials across the national-park system in general are becoming more and more conscious of their skies as a resource. The National Park Service has been working with the IDA to protect dark vistas whenever possible.

“There have been advocates of dark sky preservation in the Park Service to the point where we have dark skies in many of our management plans,” Ryan said.

“At our regional office in Denver, there is a dark-sky contingent that is assisting parks in developing astronomy programs.”

Advocates offer a clearinghouse of astronomers, both professional and amateur, willing to help parks with presentations.

Two highly qualified volunteer astronomers came to Natural Bridges to give night talks, and one is working on a video showcasing the monument’s night skies, Ryan said.

“We’ve also been fortunate this year to have a seasonal ranger who is a devoted amateur astronomer,” he said. The park is seeking additional funding to have an astronomer on staff year-round.

Ryan said visitors who attend the night-time programs greatly enjoy them. “We get a fair amount of people from the Four Corners who are used to dark skies, but we also have folks from the crowded seaboard or big cities, and they are just awed by the vividness of the dark sky we have.”

The sight of the Milky Way as a “river of light,” as one Natural Bridges press release called it, is particularly amazing to some visitors.

The majority of people in the United States cannot see the Milky Way outside their homes because of light pollution, and a sizable number have never seen it in their lives, Ryan said.

“They come here and they are just blown away.”

He added, “There’s an anecdote used by a lot of astronomers, about a massive power outage in the L.A. area [after an earthquake in 1994], when people were seeing the night sky for the first time in their lives. Many people called 911 to report a mysterious linear light streak in the sky — they didn’t know it was the Milky Way.”

Ryan said he has heard no negative comments about the new sky-friendly lighting or the darkness in general at Natural Bridges.

“There are certainly people who don’t like the dark, whether they’re afraid of the dark or just agitated because they can’t see everything, but I haven’t heard any complaints from people wanting us to put brighter lights up,” he said.

“People coming here know they are coming to a remote area and are looking for a pure, natural experience.”

Natural Bridges, located some 35 miles west of Blanding, Utah, is indeed off the beaten path, but its visitation is about 95,000 a year and climbing. This may be partly attributable to its status as a dark-sky park, something that is promoted at visitors centers in Monticello and Blanding as well as on the park service’s web site.

Ryan said a representative of the Japanese tourism industry stationed in Salt Lake City attended one of the night programs at Natural Bridges and is now promoting the night-sky resources of the Four Corners area to Japan.

“I think we’re getting on the map,” Ryan said.

Ryan, who came to Natural Bridges a year and a half ago after working many years at other Four Corners parks including Lake Powell and the Grand Canyon, said he never tires of seeing the stars himself.

“It’s always spectacular to be able to take a walk at night around here and see a whole extra aspect of your world that you just don’t get during the day,” he said. “It’s amazing to look up and feel that connection to the whole universe.”