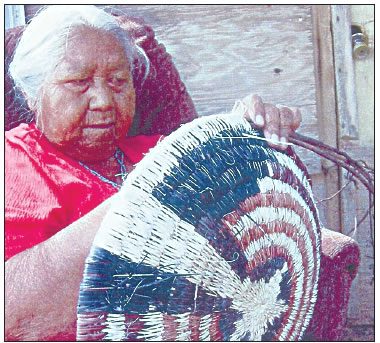 Lynn Brittner speaks softly into the phone from her office at the Southern Ute Cultural Center and Museum (SUCCM) in Ignacio. Under her guidance as executive director, SUCCM preserves what is left of Ute culture, revives pieces of the culture that have been lost, and tries to teach visitors about the Utes.

“People usually go to Mesa Verde or the Navajo Nation. No one knows who the Utes are.” asserts Brittner. “That’s ironic. They’re the oldest living continuous occupants of Colorado.”

Their Uto-Aztecan language is spoken from Mexico to Canada. They once controlled the trade routes known as the Spanish Trail, running from the Santa Fe area to Colorado, Utah, Arizona, and California.

Brittner hopes two things will soon draw more attention to the Utes: the expansion of SUCCM into a new complex over the next 18 months, and an exhibition called “Song of the Basket,” up since last August in SUCCM’s present facility.

“Song of the Basket” evolved when 10 elder Ute basket-makers from White Mesa, Utah, approached Brittner and pointed out that once they passed away, no one would be making baskets.

“This new generation is just not interested [in leaning how],” says Brittner. “They’re getting educated, they’re getting good jobs, they’re moving to cities.”

Responding to the elders’ concerns, she began making trips to their homes to document basket-making methods. She promised to buy contemporary pieces they produced.

The White Mesa basket-makers also came to Ignacio in a bus from their local senior center to visit SUCCM and the Ute Mountain Casino. Brittner breaks into a delighted laugh. “They’re charming, wonderful, vivacious women,” she chuckles. “They really enjoy traveling, these ladies.”

But when they’re not roaming the countryside, the elder White Mesa basket- makers work at a demanding craft. They pick red willow or sumac branches, split them, and form coils. The task can leave their hands cut and chapped.

Then they develop a concept for each basket and start to weave, sometimes creating simple geometric shapes, sometimes pictographs, butterflies, stars, willow flowers, or pictorial designs. Some of the women shape their creations into jars and seal them with pitch to carry water, or make medicine baskets depicting stages of a person’s life.

Designs come from aunts, older cousins, and old-time traders. The Twin Rocks Trading Post in Bluff, Utah, has a small historic basket collection from which the artists gather ideas.

“They weave baskets from their hearts,” explains Brittner, adding that the women often sing traditional songs while they work, and employ the traditional form of three to five willow rods per basket coil.

Visitors can see all these pieces in “Song of the Basket.” The name derives from a poem by a Ute elder who was inspired by the weavers’ work.

Containing about 80 pieces, the show will be on display until 2010. After that, SUCCM will move to quarters northeast of the intersection of Highway 172 and C.R. 517, just south of the new Sky Ute Casino.

Brittner hopes at that time to expand “Song of the Basket” to include historic as well as contemporary pieces, and to explain the influence of Ute basket-making on other Southwestern Native American groups.

According to the White Mesa basket-makers, the Utes taught the Navajos basketry in exchange for peace after a long period of war. Brittner laughs quietly. The Navajos agree that they fought with the Utes, but don’t agree on who created peace. “Who had baskets first is the big question here.”

No matter who did, the Navajos began to prize Ute baskets. Tribal taboos forbade Navajo medicine men to make their own ceremonial baskets and pictorial designs for their rituals. Ute artists stepped in to help.

The Utes’ cousins, the Paiutes, also made baskets, but their approach to the craft hasn’t yet been fully researched. Brittner hopes to change that.

“We’ve interviewed old-time traders in their 70s and 80s, interviewed basket- weavers in their homes, and where they were born and raised in teepees in Allen Canyon, [Utah], trying to get the whole picture,” she says.

For her, “Song of the Basket” in its current form is just a preview of what is to come in the new Southern Ute Cultural Center and Museum, which she predicts will “be a wonderful space” with 8,000 square feet of permanent exhibit and temporary galleries.

The facility will have a library, an elder story-telling room, two classrooms, a multipurpose space, a grand hall, and an outdoor cooking area. State-of-the-art storage will protect collections with humidity and temperature control. The building will feature a green roof, recycled furniture, and carpets made of old tires.

Besides “Song of the Basket,” oral histories with elders, veterans and other community leaders; rotating exhibits, clothing borrowed from the Smithsonian; and myths, legends, and contemporary tales will tell the story of Utes as warriors, hunters, traders, and artists.

Cookbooks will explain how to prepare groundhogs, hummingbirds, and pemmican, a mixture of chokecherries, dried elk or venison, and lard. Fashion shows, and a haunted house at Halloween will offer a chance for delightful social interactions.

“We’re hoping to create bridges to people in Durango who wouldn’t normally come to the reservation,” says Brittner. “We’re hoping to bring in people to learn more about the Ute culture from all over.”