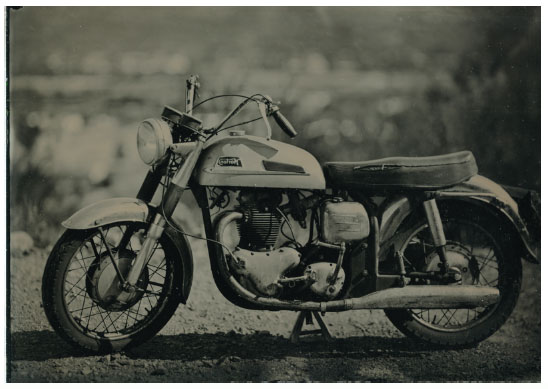 As an archaeologist, Carole Graham is used to keeping an eye on the past. These days, her expert eye is looking at the world through a different kind of lens.

The Cortez resident is pursuing the 19th-century art of large-format wet-plate photography. Graham creates each of her tintype images through a painstaking process. She begins by pouring collodion (a liquid made up of nitrocellulose, ether, and grain alcohol) onto a thin piece of metal—hence the term “wet plate”—and then sensitizing the plate in a silver nitrate bath

She exposes the plate using an antique German camera made in the 1890s; an exposure takes 5 to 10 seconds. Then she has about 15 minutes to develop and fix the image. Finally, she applies a protective coating of varnish to the dried plate.

The technique produces a unique, positive image directly on the metal plate. (The plates Graham uses are actually aluminum, not tin.) There is no negative, so the result is not just an image—it’s also a handmade, one-of-a-kind object.

Wet-plate collodion photography flourished in the 1850s and 1860s. It was the era of the Civil War battlefield photography of Mathew Brady. So powerful was this new way of documenting images that in 1859, author and amateur photographer Oliver Wendell Holmes called photography “the mirror with a memory.” After the war, explorer/photographers such as Timothy O’Sullivan and Carleton Watkins hauled their large-format cameras and portable darkrooms up mountains and through canyons, photographing the rugged landscapes of the American West.

Archaeology and historical documentation led Graham to become a practitioner of large-format photography herself. In about 2008, through archaeological work, she discovered the photographs of Thomas Michael McKee, a photographer who worked in Montrose, Colo., in the late 1800s.

“I got into him because I was doing an archaeology project, and I was finding images of this historic property that he took,” she said. McKee’s work led her to Charles Goodman, another photographer who worked in Southwest Colorado. “He was a contemporary of William Henry Jackson, who everybody knows as the photographer of Colorado and the intermountain West. He basically operated in all the places I’m in: Montrose — he spent time in Mancos — he lived and died in Bluff [Utah].”

In 2014, Graham found an antique camera on eBay, and in early 2015 she made her first photograph — a view of her house in Cortez.

Inside that house, there’s a living room that feels a bit like a Victorian parlor. Graham’s personal collection of old photographs includes images from the studios of McKee, Goodman, and Jackson — she searches for them on eBay. There’s antique furniture and a library of well-thumbed books. Her kitchen cabinets feature decorative punched-tin panels that she designed and made herself. The darkroom is tucked into the basement. Clearly, this is a household where creativity rules.

The backyard serves as an open-air studio. There, Graham can produce images that are 2.5 by 3 inches, 3 by 5 (about the size of a smartphone), or 5 by 7. The large format allows the lens to record a great amount of detail. Besides the gleaming mahogany camera, her other equipment includes a variety of lenses and a portable darkroom, which enables her to take the camera on the road.

Wherever she is shooting, timing is key to the success of the process. A good photograph is not only a matter of framing the image well but also of mastering the complexities of changing light, weather, and even the age of the collodion, whose reactive properties alter over time.

“So many little things can go wrong at any moment,” Graham said. “You could have really old collodion and not realize it’s that tender, and you get it all beautiful. And you put the varnish on it [the plate], and it’s so fragile that the varnish eats away at it and destroys the image right before your eyes.”

In January of this year, Graham showed a selection of her images at the Cortez Recreation Center. The exhibition included some of her favorite subjects, such as portraits of her friends and relatives, including her husband and daughter. The portraits are a study in contrasts. The poses are dignified, almost formal — a requirement of the long exposure time. Because they’re tintypes, the images look, well, like something you might see behind glass in an antique shop. And yet the subjects are clearly people of today, in contemporary clothing and hairstyles, T-shirts and hoodies, sneakers or sandals.

“She’s not trying to make things look old-fashioned, she pulls in the modern elements. It can be jarring, it’s not what you’re expecting — and that makes it really interesting,” said Kari Schleher of Cortez, a friend of Graham’s who has sat for a portrait session with her.

A selection of these modern tintypes can be seen on Graham’s website, www. mycollodionjournal.com. Among them are a gleaming, vintage motorcycle; moody still lifes; and landscapes of canyons and archaeological sites, shot at locations such as Pedro Point and Cannonball Ruins at Canyons of the Ancients National Monument.

For Graham, images of people are part of the appeal of historic photo graphs. One of her favorite styles of 19th-century photography is the occupational portrait. A butcher would pose with his cleaver, a carpenter with his box of tools. As she describes these portraits, they sound a bit like the social-media profile pictures of their day.

“People would often use them to advertise or give out to customers,” she said. “I find those absolutely fascinating. If I had a little studio, that would be really fun — to invite people who have tools that identify their trade and have them pose — you know, like the IT guy with the computer.”

After two years of learning her craft, Graham recently began offering photo sessions. It’s a memorable experience. She’ll advise her subjects on the best colors to wear for a sitting. Even though the tintype is black and white (and shades of gray), the collodion is sensitive to light in such a way that certain colors aren’t recommended — they will come out too dark or light.

“It was a really fun process,” Kari recalled of her photo shoot. She says she especially enjoyed being able to go into the darkroom with Graham to see the images emerge.

When Graham was a child, she felt strongly connected to 19th-century roots. During her Midwestern childhood, genealogy and old photographs of her ancestors were key to her sense of self. And American history was right in the neighborhood. “My stepfather’s family had a law office that was kitty corner to Lincoln’s house [a national historic site in Springfield, Ill.], so I used to go to Lincoln’s house, like, all the time when I was a kid. Seriously!”

Her enthusiasm for the past is infectious. It’s also tempered with an awareness, as an archaeologist and a student of history, that the past shapes our world today in powerful and not always positive ways. “We’re still living with the fallout of western expansion, that whole manifest-destiny thing.”

In any era, the camera sees both tiny details and the big picture; it takes portraits of individuals and also captures the social context of the time in which they happen to be living.

According to Graham, there was no commercial photo studio in Cortez in the 19th century. “I actually went and looked this up the other day, because I was really curious where it would have been,” she said. In old newspapers, she found only advertisements for traveling photographers who were coming to town.

A large-format wet-plate photography studio in Cortez? Perhaps it’s an opportunity that’s been waiting for someone like Carole Graham.