The end of a chapter in the Recapture Trail saga

One chapter of Utah’s long and tortuous Recapture Canyon saga closed in mid- January, with two guilty pleas to destruction of federal property. However, the debate about the off-road vehicle trail that Kenneth Brown and Dustin Felstead created on Bureau of Land Management land in the scenic canyon is far from over.

Brown, 67, and Felstead, 38, tendered guilty pleas to the misdemeanor offense on Jan. 13. The U.S. Attorney’s Office in Utah announced the Blanding residents’ pleas and sentences a week later. 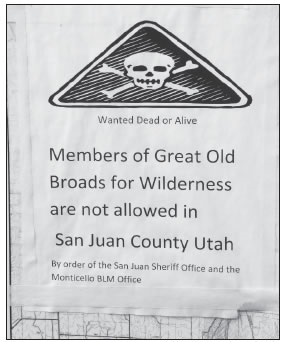 These posters were put up at the Recapture trail-head and on road signs in San Juan County, Utah, some time during December. The perpetrators have not been caught, but the posters are being regarded as evidence of a threat, according to a statement by the Utah State BLM Office.

Felstead was sentenced to two years’ probation, and ordered to pay $8,000.

A call to Brown’s number rang unanswered, while contact information for Felstead could not be located.

Reactions to the plea and sentences show a rift between wilderness supporters and San Juan County leaders. Ask San Juan County Commission Chair Bruce Adams, and the men got a raw deal. But Ronni Egan of the Great Old Broads for Wilderness believes the punishments send an important message about the value of ecological and archaeological resources.

“We’re very pleased to see a meaningful penalty attached to this activity, because in the past, often, people have only received a slap on the wrist for their misdeeds on federal lands,” Egan said Jan. 25.

“We think it did send a message. This kind of unauthorized construction on a public land is a bad thing.”

But Adams said the men might not have known they were doing anything wrong. “The people who did the work on that trail, in my opinion, did it innocently, not to harm anything,” he said.

“I think it’s over the top to make them pay a big fine. I think to demand that kind of fine out of them is excessive and will really do damage to them. It might even break them.”

Bob Turri, a member of San Juan Public Entry and Access Rights (SPEAR), agrees. He said that while his grassroots organization does not condone lawbreaking, Brown and Felstead didn’t mean to cause damage.

“The fines are a little steep, in my opinion, for guys who really didn’t know what they were doing,” Turri said. “I don’t think they had any idea as to the magnitude of what they did. They’re going to serve as the example. It’s unfortunate, but that’s the way it is.”

He added: “Our group does not uphold illegal actions. We try to be a responsible user of the lands.”

Egan says the fines don’t even come close to paying for the damage to Recapture Canyon, and she isn’t convinced Brown and Felstead were ignorant of what they were doing – or that they acted alone. The offroad vehicle trail was constructed in 2005, without the BLM’s authorization. But the agency waited until 2007 to close the trail, which crisscrosses 9 acres of Ancestral Puebloan archaeological sites. County officials said they were told the closure was temporary, and to apply for a right-of-way permit, but years later, that request remains under review The U.S. Attorney’s Office says Brown and Felstead admitted to using picks, shovels and other tools to construct the trail, which boasts a wooden bridge, shored-up curves, and culverts “I can’t imagine anyone not knowing that kind of construction was illegal without proper procedures and archaeological clearances,” Egan said. “There might have been some people who showed up to work on these who didn’t know, but there were people in the process who must have known. She said she believes more people than Brown and Felstead were involved. “There are thousands of hours of labor in that trail. It was civil engineering, basically. U.S. Attorney’s spokeswoman Melodie Rydalch declined to say what led investigators to Brown and Felstead, but Egan and Turri both said they were told the men confessed at some point last year, before the statute of limitations would have expired.

Presumably, the government continues to investigate looting that took place at the Recapture Great House ruin, also in 2005. The site is accessible from the illegal trail, but all sides in the trail dispute condemn the looting.

“We aren’t able to comment about the means and me t h o d s of an investigation, or whether there are pending or continuing investigations,” Rydalch said in an e-mail Jan. 25.

What becomes of the trail remains, for now, an open question. The BLM is still undertaking an environmental assessment, or EA, as it considers San Juan County’s request for a right-of-way — a request the Great Old Broads say should not be granted.

“We feel that this is strictly a bogus route to take with an illegally constructed trail that has fallen into bad disrepair because it has been closed for four years,” Egan said.

The Great Old Broads are not opposed to non-motorized access for the Recapture area, she said. “Motorized traffic in a sensitive riparian area like that simply is destructive to both biological and cultural resources,” Egan said. “There are thousands of miles of open roads and trails in San Juan County for folks to ride on. This is one short, tiny area we think should be protected from motorized access.”

But Adams says the county was told the trail’s closure would be temporary.

“We were promised, about three years ago, when a BLM employee entered the office and told us this will be a temporary, at most, six-month, closure,” he said. “We’ve been wondering why it’s taken over three years, and it doesn’t look like we’re any closer to getting it open.”

He took his concerns directly to the state director of the BLM on Jan. 25. “They were unwilling to commit to any date,” Adams said. “The county has applied for a right-of-way permit in Recapture Canyon. They (BLM) have to do an EA. They’ve also got to decide how they’re going to mitigate the damage caused by the trailbuilders who pleaded guilty. They were unable to give me a timeline.”

Turri said he believes the BLM encountered “a whole host of blocks” from different interest groups.

“I wish it would get over with — win, lose, or draw, get this damn thing over with,” Turri said.

The ongoing controversy over Recapture Canyon has generated “a lot of hatred” and pitted people against one another, he added. Citing the wounding of Arizona Rep. Gabrielle Giffords and 12 others Jan. 7 — in an attack that left six others dead — Turri called on everyone to tone down the rhetoric.

Turri earlier mentioned WANTED: DEAD OR ALIVE posters that someone put up on at the Recapture trailhead and on road signs around San Juan County in December. The signs said, “Members of Great Old Broads for Wilderness are not allowed in San Juan County Utah by order of the San Juan Sheriff Office (sic) and the Monticello BLM Office.”

Those agencies both denounced the posters, and Utah State Director of the BLM Juan Palma issued a statement saying, “These posters are a cowardly attempt by an unknown group or individual to intimidate a legitimate conservation organization that is a civil proponent for the management of public lands in southeast Utah. The notices have been collected by a BLM Law Enforcement Officer as evidence of a threat.”

Turri agreed that name-calling and possible threats are unnecessary. “And not just on a local level. No matter what the conditions are, you can keep a civil head on it when you’re dealing with it,” Turri said.

Egan also mentioned the Tucson shootings, saying they cast the “cockamamie stunt” of the wanted posters in a whole new light. “We [first] thought it was a pretty amusing little stunt. But it was nevertheless a death threat,” she said. “It came just before the shootings in Tucson, and it took on a greater meaning to us than just a cockamamie stunt.”

Egan denied suggestions, raised in a letter to the San Juan Record, that the Great Old Broads had put up the signs themselves to manipulate public sympathies. This “is of course ridiculous,” she said.

“Sentiments run very high in Southern Utah among some of the population that just loathes everything to do with the federal government,” Egan said. “They don’t like the BLM, or the fact that the federal government controls a great deal of land in San Juan County. Pretty much any BLM regulation is frowned upon.”

The Great Old Broads, Southern Utah Wilderness Alliance, SPEAR, San Juan County, and others are to meet Feb. 2 and 3 concerning Recapture Trail. To be considered are whether the BLM should issue the right-ofway permit, and with what stipulations.

“It’s hard to pull heads together when you know people have minds that go in different directions,” Turri said. “But it will probably work out. We’re hoping it does.”