The first lady of libraries 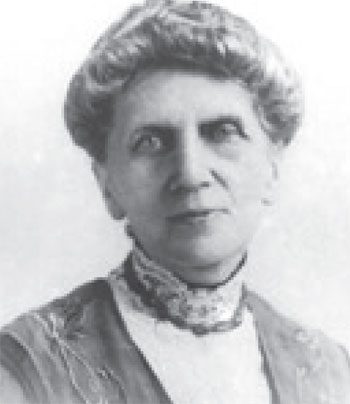 Caroline Maria Hewins was born in Roxbury, Mass., on Oct. 10, 1846. Her father was a wealthy Boston merchant who provided a comfortable home for his wife, children, and an extended family of aunts, uncles, and grandmothers. She was the oldest of nine children and was often called upon to care for her siblings. She was reading by the age of four and her love of reading only increased as she read folk and fairy tales, English classics and stories from Greek, Roman, and European literary collections to those siblings.

Her childhood education consisted of private schooling at home, before attending Eliot High School. After receiving her high school diploma, she attended the Girls’ High and Normal School in Boston, where she graduated, although at first she described having some difficulty adjusting to her new educational environment.

After graduation, she was hired to do Civil War research for the Boston Athenaeum. This is where she received her brief library training, learning sound bibliographic practice while working for one year under William Frederick Poole (American bibliographer and librarian). She states that during this time she learned about the innerworkings of the library and how it was managed and funded.

Caroline left the Boston Athenaeum to take a job as librarian at the Young Men’s Institute of Hartford, where she was employed from 1875 until her death in 1926. When she was hired at age 29, the Young Men’s Institute was a subscription library with 600 members, housed in the Wadsworth Atheneum. It was a private association dedicated to informal learning, lectures, and debates. Under her 50-year leadership, the library moved from private to public, and its children’s programming became a model for libraries around the country.

In Hartford, she was dismayed to discover a dearth of children’s materials in the library and spent considerable time and resources to develop a children’s collection. She partnered with local schools so that children would have better access to library materials. In 1882, she published Books for the Young, the first bibliography intended for children, and in 1888 she wrote a history of children’s literature for the Atlantic Monthly. Caroline made herself available to local parents and teachers, serving them tea once a week when they came to consult with her, and founded the Education Club, which later became the Parent- Teacher Association. She also devised nature outings and story times for children, causing them to flock to her library. In order to better serve the community, she even expanded the library’s hours to include Sunday afternoons so that working people could take advantage of the institution’s resources.

In 1891, she founded the Connecticut Public Library Committee and became its executive secretary. Over the next decade, Hartford’s “First Lady of the Library” traveled the state encouraging collaboration between libraries and schools. She set up traveling libraries and book depositories all around the state at settlement houses, schools, and factories. A nationally-respected expert on library management, Hewins oversaw the quickly growing Hartford Public Library system — a rarity for a woman at the time, as most libraries were headed by men.

She was one of the early members of the newly established American Library Association. In 1882, through the ALA, Hewins sent a questionnaire to 25 libraries around the country and asked: “What are you doing to encourage a love of reading in boys and girls?” Based on the discouraging answers, which revealed that little was being done to encourage early readership, she made an impassioned report to the ALA that galvanized their attention. Within a few years, the ALA had established a Children’s Section so that members could exchange ideas on how to best serve young readers and it was supporting professional training schools for children’s librarians.

Caroline was always thinking of ways to reach children and so when she traveled, particularly abroad, she wrote extensive letters to the library’s young patrons. These letters were gathered and published in 1923 as A Traveler’s Letters to Boys and Girls.

Aside from her contributions to children’s library services, Caroline also campaigned for the creation of public libraries and spoke of the importance of free libraries throughout Connecticut. Both an innovator and a reformer, Caroline Maria Hewins is credited with transforming the library into a major cultural and intellectual resource for the city of Hartford. In recognition of her contributions, in 1911, she became the first woman to receive a Master of Arts Honoris Causa from Trinity College. She is also remembered through the Hewins scholarship, available to assist women who want to become children’s librarians to attain their educational goals. In late 1925, shortly before her death, she started the scholarship and it continues today.

Posthumous honors to Hewins include induction into the American Library Association’s Library Hall of Fame and the Connecticut Women’s Hall of Fame.

American Libraries includes Caroline Hewins as one of the 100 Most Important Leaders we had in the 20th Century.