The future of farming

Farmers and ranchers must change the way they see themselves, becoming more than just a cog in the giant industrial production wheel.

That was the message delivered by Lisa Hamilton, author of “Deeply Rooted: Unconventional Farmers in the Age of Agribusiness,” at the Four States Agricultural Expo on March 20. Hamilton spoke to a crowd of more than 100 in the morning and also participated in a panel on agriculture in the afternoon. 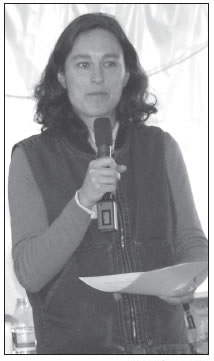 Lisa Hamilton, author of “Deeply Rooted: Unconventional Farmers in the Age of Agribusiness,” discusses the future of farming before a crowd at the Four States Ag Expo on March 20. Photo by David Grant Long

Farmers and ranchers were “some of the true founders of the West,” Hamilton said. They had a strong role as citizens and community leaders; “they were simply the majority of the population,” she said. They were stewards of the land, innovators and experimenters.

But the beginning of the 20th Century brought the massive transformation of the nation from an agricultural to an industrial economy, and farmers had no choice but to become part of that industrial machine. Over time, their role became narrower and narrower, distilled down to producing raw materials for corporations, she said.

Their duty was simply to “produce as much as possible for as little as possible.”

And over time the image of farmers changed to one of people who are “stolid, reserved, and quiet” — passive rather than active. When the public hears about farmers and ranchers being discontented, it’s usually in the context of a natural disaster against which they are largely helpless, such as a flood or drought.

However, farmers have risen up and become politically active at different times in the nation’s history. Hamilton showed slides of the great farm protest in Washington, D.C., in the winter of 1979, when farmers from around the country drove their tractors to the nation’s capital — some of them taking 18 days to make the journey in their slow-moving vehicles.

The tractors caused massive traffic jams for D.C. commuters — “in effect slowing them down to a farmer’s pace for a moment,” Hamilton said.

The protest, led by the American Agriculture Movement and seeking higher prices for crops — largely failed, however. “It’s the nature of the industrial system to pay farmers as industrial producers,” in effect, as little as possible, Hamilton said.

At that time, it wasn’t really possible for farmers to redefine their role, but she believes it is now.

“Agriculture is entering a whole new stage,” she said, prompted by climate change, the depletion of water resources and the looming end of cheap energy.

Of all the fresh water used in the United States, 80 percent is used in agriculture, she said. Although just 16 percent of American farmland is irrigated, that 16 percent accounts for nearly half of the value of agricultural products grown and sold in the U.S.

Agriculture has come to depend on an artificial scaffold of pesticides, imported water, and fertilizers made from natural gas, Hamilton said. This system has produced tremendous yields and allowed the human population to grow enormously, creating an even greater demand for food, so that now there is the sense that agriculture could not function and the world could not survive without that scaffold.

“Water is a major, major driver of the whole agricultural economy,” she said. “But what happens when water becomes scarce? When energy goes from being cheap to expensive, and the climate goes from being stable to unstable?”

Farmers and ranchers must take on the role of being stewards, innovators and leaders in helping agriculture adapt to new conditions, she said.

“Scaffold” farming eliminated the farmer as steward; he or she wasn’t asked to think or care or protect, just follow the conventional wisdom. But that approach is short-sighted, she said.

“We can’t afford to have farmers and ranchers be considered just industrial producers,” she said, comparing that to having doctors focus on manufacturing Band-Aids. “Farmers and ranchers have the most knowledge about how agriculture works on the ground from day to day. They are figuring out how to adapt agriculture to this new set of conditions.”

She described a North Dakota farm family, the Podolls, that is one of three families profiled in her book. Although everyone around them was growing vast tracts of corn and soybeans to sell and then going to the supermarket for food to eat, the Podolls started with the idea that they wanted to be able to feed themselves first, then sell to others.

When growing a commodity crop, Hamilton said, there’s always a “whisper” in the back of the farmer’s mind that he or she isn’t quite competent, that he needs help, that he doesn’t know everything he should. But when someone is raising a garden with foods that can be eaten at their own table, “you feel capable,” she said.

Interestingly, former President Bill Clinton recently echoed Hamilton’s observations when he said that he had been wrong to implement low tariffs on American-grown rice and crops that were then sent to Haiti in the 1990s. The cheap food encouraged Haitians to become dependent on imports and to abandon their own farms, something that is now haunting them as they try to recover from the disastrous earthquake in January.

The Podolls started saving seeds from the most successful plants in their garden so they would have strains that had adapted well to their area. Over time their crops flourished, and they had 480 acres planted, much of it in grains.

Climate change has arrived in North Dakota, as recent headlines demonstrate, bringing wetter and wetter years. It’s no longer possible to grow wheat without fungicides. Many farmers had to give up that crop, “and it was heart-breaking,” Hamilton said.

However, some farmers decided to look to themselves, working with researchers from North Dakota State University and forming a “Farm Breeder Club.” While “prima donna” strains of crops can survive in an artificial environment, the farmers wanted workhorse seeds that could thrive in harsher conditions. For instance, there is a new strain of millet that can emerge in bone-dry soil and drive out Canada thistle, she said.

They decided to seek a better strain of wheat, one that didn’t just produce high yields but could emerge quickly and shade out weeds and that would flourish in tough climate conditions. It also had to be organic, meaning it had to be free of genetically modified organisms.

They received a sample of seed from a man in Oregon who heard of the effort and sent some wheat that had worked for him — no strings attached. The Podolls and others began working with that seed, taking “the first step in restoring the vital partnership between farmers and the plants they grow,” Hamilton said.

Today, the Farm Breeder Club has introduced a variety of hard red spring wheat called KW 175 that has good yields, is pest-resistant and grows well in both wet and dry conditions. Best of all, Hamilton said, the seeds belong to no one, because the strain is not patented. Each shipment comes with a letter from the breeder club asking the buyer to share it with neighbors and if they sell the seed, to try to send 10 percent of the profit back to the club.

“This is not an isolated example, Hamilton said, and transformation won’t come from an isolated piece of legislation or a court decision. Rather, it will come from farmers making “small but deliberate decisions” such as growing their own seed and then working hard to make those decisions succeed.

Hamilton noted that Jude Scheuenemeyer, co-owner of Let It Grow Nursery in Cortez, has proposed reinstituting the old concept of the grange with an emphasis on sharing knowledge and building a new community around agriculture. Hamilton said that would be a good idea.

“We shouldn’t see this as a nostalgic effort,” she said, “but as an important part in the vital cutting-edge need to redefine what it means to be a farmer and a rancher in the 21st Century.”