The goshawk: The spotted owl of Arizona’s forests?

Goshawks are soul-stirring creatures, prized by falconers and bird-watchers alike for their fierce and formidable hunting skills. They’re also perched near the top of the food chain, which makes them a key species to watch when gauging forest health.

As such, goshawks have come to fill an iconic role in controversies about how to manage some of the last oldgrowth forests in the United States. It happens that the best of these oldgrowth forests (tracts with undisturbed old trees) lie north of the Grand Canyon, within Grand Canyon National Park and in remote reaches of the Kaibab National Forest in Arizona. 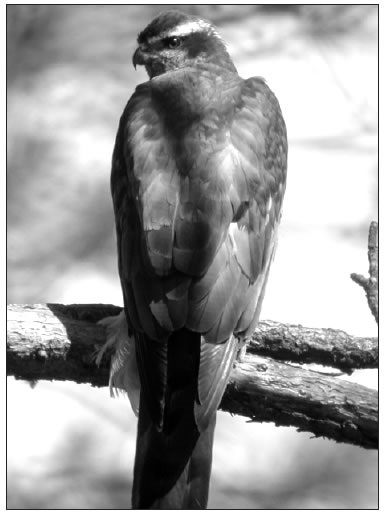 The goshawk known as KG6 perches in a tree in Arizona. Photo by Richard Reynolds

There, environmental groups and foresters are engaged in a standoff nearly as old as the settled West. The environmentalists see the North Rim as a prize – a thriving relic of original Western forest land. For them, the goshawk embodies the living spirit of the place.

“To witness a goshawk dashing between trees in pursuit of a squirrel is as thrilling as seeing a wolf on the run,” said Kieran Suckling, executive director of the Center for Biological Diversity in Tucson.

The Forest Service has funneled two decades’ worth of funding and manpower into goshawk research. But the agency also wants to carry out a key component of its founding mission: science-based forest management to produce a sustainable yield of timber.

Much like the spotted owl, the dashing, raven-sized goshawk is the species in the middle.

Of all the scientists who have studied goshawks, no one has dedicated more time to the species than Richard Reynolds, research wildlife biologist with the U.S. Forest Service. For 19 summers, he’s set up shop at the Forest Service’s Big Springs Ranger Station, deep in the Kaibab National Forest near Jacob Lake.

He and his workers – mostly graduate students and interns – inhabit a small cluster of cabins that edge a lush little meadow in a forest clearing. They wake early, meeting each morning over hot coffee and planning the day’s approach. They pore over maps of the surrounding ponderosa-pine forest, dotted with small round stickers denoting places where they’ve spotted single goshawks, or confirmed nesting pairs. They pack for a full day’s outing – lunches, sturdy boots, climbing gear. And they’re off, crowded in well-maintained Forest Service trucks that still squawk and bounce on the rooty and rutted back roads.

Reynolds and his team have been ranking more than 120 goshawk home ranges from best to worst based on survival of parents and their offspring, among other factors. They then tie those observations back to habitat measures, including forest structure on a variety of spatial scales.

In a summary of his studies written this fall for the Forest Service, Reynolds notes that goshawk success depends on a number of factors. Food comes first, he said – the goshawk needs its prey species to be healthy. Climate and weather hold ample sway, especially when drought limits prey. Then comes forest structure – including the presence or absence of old-growth trees and small openings between groups.

Reynolds has used his science to inform forest-management guidelines that are in play to some degree throughout the Four Corners states. Forest Service land managers in Arizona and New Mexico rely on them, Utah has incorporated them in part, and Colorado foresters are encouraged to consider them in drafting their forest plans.

But the “goshawk guidelines,” as they’re called, have drawn a vocal contingent of critics.

The Center for Biological Diversity has joined in several attempts to get the U.S. Fish and Wildlife Service to list the northern goshawk as an endangered species. So far, they’ve not been successful. But Suckling – a founder of the group as well as its executive director – says the guidelines are woefully biased against the goshawk.

There are two sides to Richard Reynolds, Suckling alleges – the scientist, and the Forest Service employee who helps write the agency’s goshawk guidelines.

Suckling has no gripe with Reynolds’ science, aside from the observation that he’s “sort of endlessly concluding his reports by saying more research is needed.” But he thinks the science gets lost in the management plans. 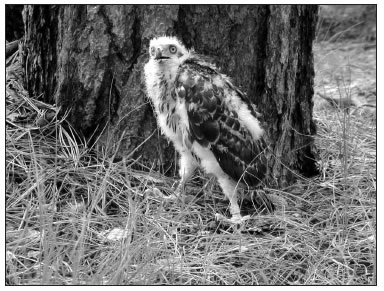 Northern goshawks live well beyond the North Rim of the Grand Canyon. Their range extends throughout the western United States north into the Canadian Rockies and Alaska. They also inhabit forests in the Great Lakes area and the northeastern United States, where they’ve been rebounding as the area recovers from past intensive logging. But the North Rim hosts higher densities of northern goshawks than anywhere else in the country.

In Washington, Oregon and the Sierra Nevada forests, goshawk management plans focus on forest structure, Suckling points out, with a goal to maintain large, old trees. He said a majority of goshawk research has shown that goshawks prefer oldgrowth forests, and spend the majority of their time within that type of habitat.

“This is an old-growth species,” Suckling says. “It’s going to eat whatever it finds in the old-growth forest.”

But Reynolds’ science lends a different foundation to management guidelines. That’s because Reynolds believes goshawks are more dependent on prey than on old-growth habitat. And managing for their typical prey species means not just the preservation of old growth. It means the maintenance of a variety of habitat types, including forest openings, shrubby areas and the edges that divide them. Such a diverse forest can be created by a variety of timber cuts, some of which might harvest large, old trees.

“Most forests have turned a corner because big trees are gone,” Suckling said. “You look at it and you go, my God, you’ve beat up everything else, and now you want to drive the last big old-growth forest down the tubes as well? It should be treated as a biological treasure, not as the last few scraps of old-growth timber.”

‘Goshawk guidelines’ get support, too

Reynolds is not daunted by such criticism; he’s heard it before.

“Some view me as tainted because I am an employee of the Forest Service,” he acknowledged. “But I can assure you that this has not influenced my recommendations to the national forests, which I advise constantly around the West.”

Reynolds said much of the opposition to the goshawk guidelines comes from people who have seen them misinterpreted on the ground – as timber cuts that don’t actually adhere to the recommendations.

As such, he’s been working with the Forest Service to develop showcase areas in Arizona and New Mexico, where the so-called goshawk guidelines have been correctly put in place.

“In 2007, I marked a 40-acre area east of Williams, Ariz., to the goshawk specifications that has since been treated. It looks good,” he said.

Reynolds is now proposing to restore a two-square-mile section of the Forest Service’s Long Valley Experimental Forest, 60 miles southeast of Flagstaff. The site has seldom been harvested, and young trees have crowded in since the last fire in 1898. It’s an ideal place, he says, to showcase the goshawkrestoration approach – because it has the old trees necessary for the mix,a nd small openings can be restored by harvesting young trees.

“This showcase is needed to provide an understanding and trust of the Forest Service’s restoration goals for both Forest Service employees and the public,” he said.

Reynolds’ guidelines got a vote of confidence in 2006, when they were compared on an experimental forest plot to those of Northern Arizona University forestry professor Wally Covington. Covington heads up the university’s Ecological Restoration Institute, which has been given nearly $20 million since 2000 for studies of forest health. Covington has been studying ponderosa-pine forests for decades, using historic evidence of their structure and fire patterns, whereas Reynolds has been looking at the forest through the eyes of goshawks.

By 2006, the researchers had been working independently on forest restoration for 15 years. So when they finally got together, they were happily surprised to see that their findings had all but converged. Both believe ponderosa- pine forests should be dynamic mixes of different-aged trees at different densities, not the uniform forests maintained by logging practices in the past.

And they say that convergence means forest managers can plan tree cuts according to the overlapping research findings — with confidence that they’ll hold up in court.

Reynolds adds that even by themselves, the goshawk guidelines have helped the Forest Service fend off numerous challenges to its forestry program, and have prevented goshawks from being listed as endangered or threatened. He’s proud of that. He estimates that the 1993 listing of the Mexican spotted owl cost the Forest Service more than $30 million by 1996.

“Because the goshawk occurs in eight of the nine Forest Service regions, our work on the Kaibab potentially saved the United States government hundreds of millions of dollars,” he said.

And now that the results have been independently verified by another prominent research program, Reynolds believes the Forest Service is on even firmer ground.

So far, he’s been right.

In 1991, the Audubon Society, Forest Guardians, the Southern Utah Wilderness Alliance and half a dozen other groups petitioned the Fish and Wildlife Service to list the northern goshawk as endangered in the forested United States west of the 100th meridian. In 1992, the FWS found that the petition had not presented enough information to indicate that listing may be warranted, but considered the northern goshawk a “candidate species” for listing at some time.

The Center for Biological Diversity and other groups sued three times in the intervening years to overturn that denial. Their efforts stalled out, after the Forest Service rolled the goshawk guidelines into its forest management plans and convinced Fish and Wildlife that they were protective enough.

The Center for Biological Diversity hasn’t let up. They took action in 2003 to stymie a timber-industry attack on the guidelines that would have rendered them less protective of oldgrowth timber and goshawks. And in 2007, when the Coconino National Forest near Flagstaff tried to work outside of the guidelines, the Center stopped that too.

So Suckling and his colleagues have held the line on the guidelines as they are – even though they deny they’re good enough for the goshawk.

Reynolds’ research has consistently tied the decline on record-breaking drought conditions, which were a hit to the goshawks’ prey base.

“We examined Reynolds’ data a few years ago,” he said, “and determined that from 1991 through 2004, non-timber- sale territories on the North Kaibab experienced a 29 percent chance of [goshawk-nest] failure while those subjected to the goshawk guidelines experienced a 54 percent failure rate.”

For now, the center has little to do but monitor timber sales, opposing those that look bad for old-growth forests. Suckling and his team have successfully challenged nearly every old-growth timber sale on the North Rim in the past decade.

But another clock is ticking. Many of the forest plans that include the guidelines were published in the mid-1990s – and forest-management plans are to be reviewed and revised every decade. So far, the Forest Service in controversial goshawk country has been skating by on extensions. But it remains to be seen whether new plans, when they are proposed, will include changes to goshawk-management strategies that allow for the cutting of more oldgrowth trees.

The Center for Biological Diversity will be watching. Meanwhile, monitoring is ongoing to see how goshawks respond to the management plans already in place. Results come in slowly from studies of the stealth, secretive birds.