Montezuma County’s farmers are encountering a bit of sticker shock this year, as they stock up on the fertilizer they’ll need for their crops.

Phosphorus is more expensive than usual right now, mostly due to global economic realities that are well beyond local farmers’ control – at a time when prices for the area’s main crop, alfalfa, are depressed. 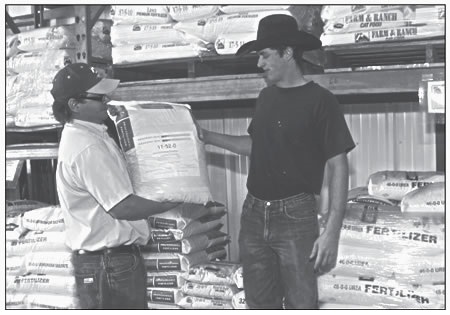 “It’s really high,” Don Schwindt, a Montezuma County alfalfa farmer, said of the cost of the essential element. “It’s high enough that it’s a significant problem, at the same time the market’s a little spooky.”

Schwindt already bought phosphorus for this year’s crops; he typically pre-buys both phosphorus and nitrogen in December. Prices were up for both. He bought less than his normal amount of nitrogen, but didn’t skimp on phosphorus, he said: “You don’t raise a crop if you don’t fertilize it.”

Phosphorus for fertilizer is mined from deposits all over the globe, including the huge “Phosphoria Deposit” underneath parts of Idaho, Utah and Colorado’s Western Slope. It’s processed in facilities that were notoriously polluting in the past, and have gotten only marginally better with environmental regulations. Besides fertilizer, phosphorus is used in explosives, matches, fireworks, toothpaste, pesticides, detergents and soft drinks.

For living things, it’s essential. Phosphorus is one of nature’s most important building blocks, forming – among other key materials – the structure of cell membranes in animals and cell walls in plants. The element shows up naturally in soils after it’s weathered from rocks, but often the concentrations in soils are low enough that they must be supplemented to support crops. Lately, the cost to do that has been spiking.

The Big R farm store in Cortez sells phosphorus mostly in the form of animal feeds, and those price increases haven’t been too dramatic, said store manager Tim Weyers. In a price hike last July, for example, a 50-pound bag of one brand of animal feed went up about $6 – but that’s the only significant rise in several years that he’s noticed.

The hike becomes most obvious in the quantities needed by farmers. According to the latest figures, released in 2009 by the Colorado Department of Agriculture, there were 51,900 acres of harvested cropland in Montezuma County. Most of that – about 35,500 acres – is in hay, primarily alfalfa.

Steve Trudeau, manager of the Basin Coop in Arriola, said prices, combined with the sluggish economy, have hit his store hard.

“Nobody is coming in here buying anything that they don’t absolutely need for the next few days,” he said. “It’s bad. Overall our sales are way down. We slowed down in August and we never have really picked up.”

Christensen said there are several factors that could cause phosphorus prices to rise. For one thing, “we’re in a global market now, not just Montezuma County or Colorado,” he said. “What happens in India and China and Brazil affect it. If India, for example, increases demand, then it increases the price across the entire world.”

Tom Hooten is interim director for Colorado State University’s agricultural extension program in Montezuma County. He said even daily events can affect commodity prices for phosphorus and nitrogen. “I heard oil went up to $100 a barrel today and stocks went down,” he said, referring to the recent strife in Arab nations. “A lot of these fertilizers are dependent on petroleum products, especially nitrogen. That’s going to drive the input prices up.

“Farmers are at the mercy of that. They can’t increase the prices of the crops they sell. Especially if they’re producing commodity crops, they’re relying on market prices.”

Besides world events and demand on phosphorus, there’s a nagging question about supply. One 2010 study got international media attention when it predicted a global peak in phosphate reserves in 30 years, with declining supplies after that.

“While the exact timing may be disputed, it is clear that already the quality of remaining phosphate rock reserves is decreasing and cheap fertilizers will be a thing of the past,” wrote the authors, Stuart White and Dana Cordell of the Institute for Sustainable Futures, in Australia. That study, and other information, is available at phosphorusfutures.net.

Christensen said he’s heard about the prediction that phosphorus could peak.

“It could,” he said. “I’m hoping it doesn’t go up any higher. I’m hoping this is the last price increase for the spring.”

Hooten has one loophole to suggest for farmers: soil testing.

“Some farmers test their fields and some don’t,” he said. “What we try to encourage is that the farmer takes the time to actually test the soil to see what is needed for the crop, and then apply that amount of fertilizer. Once you reach a certain threshold, more fertilizer isn’t going to increase yield.”

The extension office keeps tables that farmers can use, based on the composition of their soil and other factors, to see how much fertilizer to apply. Soil testing could be a way to save money on expensive fertilizers and reduce input costs.

Despite the elevated prices, customers at the IFA store are still buying fertilizer as far as Christensen can tell – but most sales aren’t due to happen for another couple of months. The decision each farmer will have to make, he notes, is whether the higher prices will be worth it when it comes time to sell hay.

So far, projections for that are looking up.

There’s a cotton shortage, Christensen says, so prices are high for that crop, which is typically grown farther south in Arizona, New Mexico and California. That means farmers in those southern states are forgoing alfalfa crops in favor of more lucrative cotton – leaving the production burden on alfalfa regions like Montezuma County.

“That’s creating a shortage of alfalfa hay,” Christensen said, “so the price of alfalfa should go up this year.”

The Co-op’s Trudeau agrees: “I expect we’ll pick up because with all the other commodities that we cannot raise here being high, pretty soon alfalfa hay’s got to go up in price. It’s just a waiting game to see what happens.”

Like Christensen and Trudeau, Schwindt has also heard the sunny predictions for alfalfa demand, both because of the cotton shortage and because of the flooding in Australia, which affected croplands there. He doesn’t count on such projections, he says, preferring a “bird in hand.”

An upward tick in alfalfa prices would be welcome after two years of a downward trend; prices are depressed and he still hasn’t sold all his hay from last year’s crop. By now, in a good year, he would have.

But all the ups and downs are part of the life, he points out: “Farming is a pretty tough business, and I’m generally optimistic.”