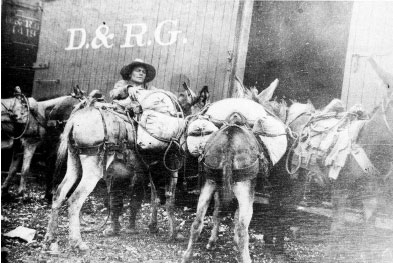 Olga Schaaf immigrated to the United States from Germany with her family in 1885 at the age of 2. The family settled in Southwest Colorado somewhere near Du­rango. She attended the Spanish school in Chama for a short while. This was her only formal education. By the time she was 14 she was being recognized as an exceptional horsewoman and she began breaking horses for ranchers in the area for $5 a week. On occasion she led hunting expeditions into the LaPlata mountains.

While she was still a teen, Frank Rivers, owner of the Ruby Mine way up in the LaPlatas, asked her if she could take a string of burros packed with supplies up to the mine and bring back ore for the smelter. She immediately refused, saying, “I can’t. I know nothing about packing.”

Rivers said he would pack the burros and then she could just lead them up to the mine. She figured it was a way to make some good money in a short amount of time and she finally accepted the offer. This began her al­most 40-year career as a “jackwhacker.”

This particular journey took her all day, ar­riving at the mine after nightfall. She discov­ered that there were no accommodations for women, and why should there be? She cer­tainly did not want to sleep in the bunkhouse with the miners, so she stayed up all night and made her return trip down the mountain at the crack of dawn.

Schaaf was a tiny woman, but it was said she was full of grace and grit. At 5-foot-4 and 130 pounds she was for­midable dressing in boots, jodhpurs and a cowboy hat. Despite her diminutive ap­pearance she was able to lift a 70-pound pack onto the backs of her burros, one on either side and one on top. On her return trips, she carried between 80- and 125-pound sacks of ore. She had a bond with those animals and always treated them gently, with love and respect, never cursing at them or whipping them. They responded to her in kind.

On one occasion when a burro skidded down a ravine and was trapped by the deep snow, she regularly delivered him hay for months, keeping him fed and alive until the snow melted and she was able to retrieve him.

In 1912, she saved the lives of 18 starv­ing miners from the Neglected Mine, who were stranded in a blizzard. She tucked each one between each of her burros, ad­vising them to hold the tail of the animal in front of them for dear life. She led them all on an ardu­ous seven-mile journey down, un­harmed but perhaps a bit cold and frostbitten, to safety through miles of darkness, thirty below tem­peratures, 10 feet of snow and ice. They left at 7:30 in the morning and arrived at 11 p.m. She was 29 years old at the time. The follow­ing year she married a miner, Bill Little.

During her illustrious packing career she visited almost every high country mine in the LaPlatas. Olga packed in lumber, ce­ment, coal, rails for mine tracks, cook stoves, heating stoves, ammunition, dynamite, to­bacco, mail, medicine and food. She packed out valuable ore concentrates worth as much as $5,000 a load. She charged $20 a ton for hauling freight and could pack a ton on 10 burros.

Olga always brought a treat for the miners and they spruced themselves up to greet her when she arrived. All the miners held her in high regard and recognized her as their life­line year-round, but especially in the winter.

A writer for True West Magazine said, “Dressed in men’s clothing to withstand the rigors of mountain life, full of good humor, unlike her fellow pack-train drivers, (she) never spoke a cuss word in her life.”

In 1981, Donald J. Orth, executive sec­retary for the U.S. Board of Geographic Names, wrote, “I may be wrong, but I don’t think there is a feature in the country named for a woman muleskinner. If proposed, I hope the name will be an interesting one.” Two years later, an unnamed La Plata peak became Olga Little Mountain.

For more information contact Andrew Gulliford at The Center of SW Studies at Fort Lewis College. He is an historian and an award-winning author and editor who has written much about Olga. Reach him at andy@agulliford.com.