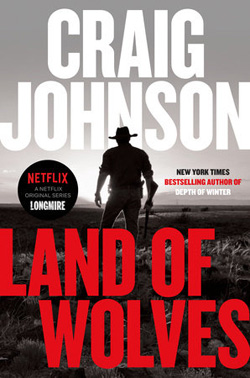 In the interests of full disclosure, I first met Craig Johnson, author of the popular Sheriff Walt Longmire mysteries on which the equally-popular Netflix TV series is based, in 2008 when he was a lecturer and I was a student at the Tony Hillerman Writers Conference in Albuquerque. Anyone who’s ever met Craig knows what an engaging speaker he is, and so can imagine how effective he would be as a writing instructor (which is very.) He at the time had just published his fourth novel in the series – Another Man’s Moccasins, winner of a 2009 Spur Award from the Western Writers of America – and being impressed with his presentation, I proceeded to devour them all, losing myself in the fictitious latitudes of Absaroka County, Wyo., and its endearing cast of colorful characters.

Fast-forward to 2010, when I’d finally finished my first novel, the legal mystery Hush Money, and had entered it in the annual Tony Hillerman Writing Contest, which sought to identify the best unpublished crime novel set in the American West. The winner would receive a publishing contract from contest sponsor St. Martin’s Press, and though I didn’t win that particular contest, St. Martins editor Peter Joseph later called to offer a multi-book publishing deal. Only months later did I learn that my contest entry had been judged by none other than Craig Johnson, who’d told Joseph, in effect, “if this guy doesn’t win, you should publish him anyway.”

Fast-forward to 2012, when Craig and I both were on national book tours (me for Hush Money, he for his eighth Longmire novel, As the Crow Flies) and our paths crossed at Vroman’s Bookstore in Pasadena, where we finally had a chance to compare notes. The following year, both those books were nominated for the coveted Lefty Award, given annually to the best mystery novel set west of the Rockies, and we found ourselves co-panelists on the subject of “Writing the West” at the annual Left Coast Crime writers’ convention. (Craig won. I clapped.)

Fast-forward to 2018, when Craig happened to read my second novel, Hard Twisted, first published in 2012, and was kind enough both to laud it on social media and to reach out to me and request a copy of my current novel, Church of the Graveyard Saints, then still in manuscript, which he then recommended to his publisher.

All of which is to say that I’m less than objective when it comes to Craig Johnson, one of the genuine good guys in the sometimes dog-eat-dog world of book publishing. Even so, I will also confess that the demands of writing my own novels, writing this column, reading for my book group, farming a vineyard, caring for horses, and generally living in the twenty-first century have left little time for pure pleasure reading, and for that reason I managed to lose touch with Walt, Vic, Cady, Sancho, Henry Standing Bear, and the other denizens of fictitious Durant, Wyoming, other than to follow them via their Netflix TV series (highly recommended.) So when the opportunity to combine business with pleasure arrived at my doorstep in the form of an advance reading copy of Craig’s latest creation, I leapt at the chance to get reacquainted.

Land of Wolves, Craig’s eighteenth Longmire novel, begins with a sheep found dead in the Bighorn Mountains, the apparent victim of a wolf attack. In searching the area, Sheriff Longmire discovers another, more troubling corpse – that of Miguel Hernandez, one of several itinerant shepherds working for Abarrane Exterpare, the patriarch of a Basque ranching family with a uniquely violent history. Walt’s efforts to find Miguel’s murderer are complicated by the appearance of Keasik Cheechoo, a relentlessly-intrusive wolf advocate, by the disappearance of Donnie Lott, Abarrane’s estranged son-in-law, and by the recurring attentions of 777W, a lone male wolf that might just be the reincarnation of Virgil White Buffalo, Walt’s late spiritual guide.

If the peregrinations that follow demonstrate anything, it’s that Johnson has lost neither his touch as a mystery novelist nor his affection for the characters he’s created. And now I’m compelled to go back and read the dozen novels I’ve missed which, needless to say, is far from the worst way to spend the coming winter. Boy howdy!

Chuck Greaves/C. Joseph Greaves is a member of the National Book Critics Circle whose sixth novel, Church of the Graveyard Saints, is the “Four Corners/One Book” selection for 2019-2020. You can visit his website at www.chuckgreaves.com.