The only female Buffalo Soldier

I have been awed by some very strong and powerful women of late. Alexandria Ocasio- Cortez, or AOC, is one. She hails from Brooklyn, N.Y. I honor and respect her. She is real. She is articulate. She speaks her truth. She has guts. Listening to her recently made me think of other women who were strong, often swam against the current, so to speak, and did not suffer fools. Some were educated, others not. 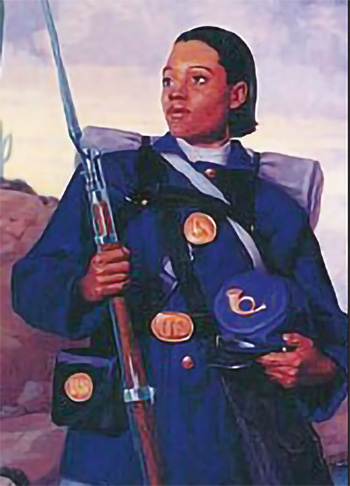 Since I live in the American Southwest, I began to search for some of those women who were here and also had spunk and guts. One that fascinated me is Cathay Williams.

Williams was born in September of 1842, in Independence, Mo. Her mother was a slave and her father was a free man. Given that her mother was a slave, her status was also slave. As a young woman she worked as a house slave in Jefferson City, Mo., on the Johnson Plantation. 1861 was the early stages of the Civil War and Union forces occupied Jefferson City. Slaves who were captured were designated as contraband and forceds to serve in support roles to the military. They were cooks, laundresses or nurses.

She served as an Army cook and washerwoman, accompanying the infantry all over the country. She was at the Battle of Pea Ridge, also referred to as the battle of Elkhorn Tavern, in 1862. It was a vicious clash in Arkansas where 11,000 Union troops under Gen. Samuel Curtis defeated 16,000 Confederate troops led by Generals Earl Van Dorn, Sterling Price and Ben McCulloch. She served under Gen. Philip Sheridan and witnessed the Red River Campaign in 1864, which included the largest combined armynavy operation of the war. The target was Shreveport, the capital of Confederate Louisiana and headquarters for the Army of the Trans-Mississippi. She also witnessed the raids in the Shenandoah Valley in Virginia and various battles and skirmishes in Iowa, St. Louis, Mo., New Orleans, and Savannah and Macon, Ga. She certainly saw this war up close and personal at a very young age.

Women were prohibited from serving in the military but despite this, Williams enlisted voluntarily on Nov. 15, 1866, under the name of William Cathay, in St. Louis. Over 400 women served during the Civil War posing as men, but she is the only documented African American woman. She served as a man for three years in the 28th United States Infantry Regimes after passing a cursory (it must have been!) medical exam. The only two people who knew the real truth were reportedly her cousin and a friend, both of whom were fellow soldiers in her regiment. They faithfully kept her secret.

Not long after her enlistment she was hospitalized with smallpox. When she rejoined her unit in New Mexico it was clear her health was failing. It may have been the extreme heat in New Mexico or the cumulative effect of years of marching and her recent hospitalization with smallpox, but she frequently became ill again and required hospitalization. She was discharged by her commanding officer, Capt. Charles E. Clarke, on Oct. 14, 1896, when a doctor discovered the truth about her and reported it to Clarke.

Though her disability discharge meant the end of her tenure with the Army, her adventure continued. She signed up with an emerging all-black regiment that would become part of the legendary Buffalo Soldiers, becoming the only known female to do so.

After her discharge from the Buffalo Soldiers she worked as a cook at Fort Union in New Mexico and later moved to Pueblo, Colo. She married but it ended when her husband stole her money and a team of her horses. She had him arrested and unceremoniously that was the end of that marriage.

She moved to Trinidad, Colo., where she earned her living as a seamstress and may have owned a boardinghouse. It was at this time that her story first became public. A reporter from St. Louis had heard rumors that an African American woman served in the U.S. Army. He found her and interviewed her. “I’ve got a good sewing machine, and I get washing to do and clothes to make,” she told the St. Louis reporter. “I want to get along and not be a burden to my friends or relatives.” The narrative was published in the St. Louis Daily Times on Jan. 2, 1876. In the interview she said: “I carried my musket and did guard and other duties while in the Army.” She also boasted of having never been put in the guardhouse.

Sometime in either late 1889 or early 1890 she was once again ill and endured a lengthy hospitalization, with the nature of her illness unknown. There was a precedent for granting a pension to female soldiers – Deborah Sampson, Anna Maria Lane and Mary Hayes McCauley (better known as Molly Pitcher) – had all been granted pensions for their service during the American Revolutionary War. In 1893, Williams applied for disability pension. The doctor who was examined her case was employed by the U.S. Pension Bureau and despite the fact that she suffered from neuralgia, diabetes, had all her toes amputated and could only walk with a crutch, he decided that she did not qualify for disability. Her application was rejected.

This illiterate, uneducated woman didn’t join the army to highlight the plight of women, or prove she could outwit her peers and superiors. She was simply a strong, independent woman who served her country and found a way to take care of herself. She became extraordinary by simply living her life. Though her career as a soldier was unremarkable, her courage as a black woman remains exceptionally inspiring. It took nearly a century after her death for her to be recognized. We must not forget her!

In 2016, a bronze bust of Cathay Williams, featuring information about her and with a small rose garden around it, was unveiled outside the Richard Allen Cultural Center in Leavenworth, Kan.

In 2018, the Private Cathay Williams monument bench was unveiled on the Walk of Honor at the National Infantry Museum.