The risk of adventure parenting 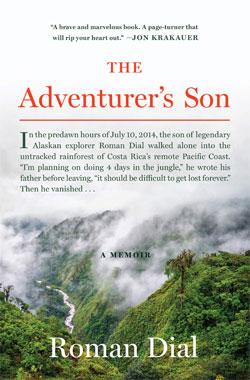 Memorials dedicated to young adults who died doing the sorts of adventure sports the Four Corners prides itself on — backcountry skiing, rock climbing, whitewater kayaking — are scattered across the region. Formal as well as informal, the memorials range from a sandstone bench along a river’s edge to a metal sculpture resembling a raptor’s aerie high on a mountain ridge to a new forest painstakingly planted by loving volunteers tree by tree.

Different as they are from one another, every memorial is a testament to an adventurous life lost too soon, and to the bereft parents, grandparents, brothers, sisters, friends, and acquaintances left behind.

Far to the north in Alaska, mythic outdoors person and noted field scientist Roman Dial and his wife Peggy raised a son, who came to be known by his father’s first name, on a steady diet of outdoor sports. Roman, the son, set off in 2014 at 27 on his own self-styled adventure that, if successful, would rival anything his father had accomplished over his long and storied career.

Roman sought to travel overland, alone and on foot, across the Darian Gap, the jungled wilderness that links the Central American isthmus and Colombia, avoiding thieves and drug cartel operatives along the way. Before he reached the gap, however, he went missing during a clandestine, solo backpacking trip across the equally remote and rugged Corcovado Peninsula in Costa Rica.

Dial, the father, and Peggy first joined, then sustained by sheer force of parental will, the massive search operation that began when Roman failed to return from his backpacking trip.

In The Adventurer’s Son, just released by HarperCollins, Dial tells the story of Roman’s adventurous upbringing, his disappearance, and the desperate quest by Dial and Peggy in Costa Rica, first in the hope that Roman might be found alive, then in search of closure, until, finally, a discovery provides answers, if not absolution.

With heart-rending honesty, Dial faces up to the culpability he feels for having introduced his son to the siren song of outdoor adventure that ultimately resulted in Roman’s death.

“I had not simply introduced him to international travel and the risks of wilderness adventure,” Dial writes. “I had included him, again and again, to the point that a large part of our relationship… was built on experiences like his illegal bushwhack into Corcovado.”

Understandably, Dial doesn’t come up with any salve for his guilt.

“Would I have raised Roman the same way knowing that he would die on a path I led him along?” Dial asks. “The answer is obvious but the question unfair.”

The question may be unfair, but the memorials to the Four Corners’ lost youth, and Dial’s bleak heartbreak as revealed in The Adventurer’s Son, make clear that the answer is not just obvious, it is worthy of full and unblinking consideration.

Scott Graham is the National Outdoor Book Award-winning author of the National Park Mystery Series for Torrey House Press. The sixth book in the series, Mesa Verde Victim, will be released June 16. More information at scottfranklingraham.com.