This couple makes community support a way of life

It didn’t take Jack Schuenemeyer long to get involved in the community after arriving in Cortez in June 2001. By July he was helping to get a recreation center built in Cortez.

“He wanted a place to swim,” said his wife, Judy, with a laugh. Since then, the Schuenemeyers have made involvement their way of life. 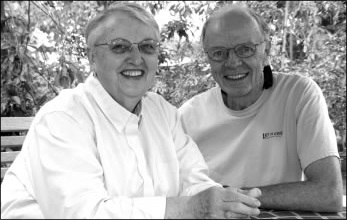 A committee to accomplish the goal of building a rec center had been in place since the mid-’80s, and in the mid 90s they got a bond issue on the ballot, but it was voted down. Undaunted, proponents launched another initiative in 2000.

Jack jumped in to lend a hand campaigning for public support, and this time the bond passed.

One can now find Jack at the Rec. Center five days a week in the early hours of the morning.

Soon after the bond issue passed, Friends of Recreation for a healthy Community was organized, with Jack and Judy among the founding members.

“The mission of the organization, which is a private, non-profit, all-volunteer group, is to provide scholarships to members of the community who otherwise would be unable to participate in center activities,” Judy said. Judy was president from 2002 to 2005 and Jack was president for a year. Both are still active board members. “Friends” has obtained funding for 228 scholarships so far.

Jack and Judy followed their son, Jude (owner with wife Adie of Let It Grow Nursery) to Cortez. They had been residents of Delaware for the previous 25 years. Jack, who has a doctorate in statistics, currently has his own statistical consulting firm, with his office upstairs in Let It Grow. This is a fulltime operation for him, with part-time help from Judy — but they manage to find time for many other projects. Judy was born and raised in Denver. After raising three children, she attended law school. Judy was an attorney at Community Legal Aid Society and was its executive director for nine years prior to her retirement.

Both the Schuenemeyers are members of the League of Women Voters, a non-partisan political organization and encourages informed participation in government and works to increase understanding of public policy issues.

As part of their work with the league, the Schuenemeyers became involved with the Four Corners Air Quality Task Force, a coalition of state, federal, local and tribal officials and interested citizens that worked to assess the effect of sources of pollution (such as power plants in New Mexico and car exhaust) on air quality in the Four Corners. The group put together an advisory report that was presented to various agencies.

Jack also served as a board member and president for the Piñon Project, a non-profit organization dedicated to enriching the quality of life of individuals and families in the community.

Jack went drag, sang and danced as one of the “Dreamgirls” in a family comedy put on as a fund-raiser for the Piñon Project. When asked if he had portrayed Diana Ross, he donned a sheepish grin and replied, “I’m not sure.”

Jack also served on the Cortez Parks, Recreation, and Forestry Advisory Board and led the compiling of a 10-year master plan for Parks and Rec that is being implemented now. One element of the plan is a community garden where locals will be able to grow veggies.

Jack is president-elect of the Cortez Area Chamber of Commerce, has chaired its education committee, and involves himself directly with local political campaigns.

Judy has served as a board member for SouthWest Colorado Concerts, was an active volunteer with the Violence Prevention Coalition, and is board secretary for Onward! A Legacy Foundation, which managers scholarship funds and endowment funds for individuals, families and non-profit organizations for charitable purposes.

Judy is also a reader at St. Margaret Mary Church. She spends her free time, when it’s not snowing and when she’s not helping raise her two grandchildren, in her garden and orchard.

Jack and Judy are room leaders for the annual Teen Maze, an experiential learning experience for teens.

On the first Friday of every month, local artists get together for a Culture Café hosted by the Montezuma Arts Council and chaired by Jack. The arts council is working on the compilation and publishing of an arts directory and calendar of art-related events.

The arts directory is in its final stages. The calendar, which is still in development, will help ensure that when Rhonda Allmon is planning a dance recital it won’t conflict with a concert put on by SouthWest Colorado Concerts.

The council also has a long-term vision of being able to fund and build a facility in Cortez for arts and other community events. Ballot, anyone?