‘Tottenville’ heads to the planning commission

The biggest subdivision ever proposed in Montezuma County appears to be headed for a hearing before the planning commission despite a letter from the planning director stating that the zoning application was incomplete and should not move forward.

On Nov. 24, developer Dean Matthews pleaded with the county commissioners to allow his proposal for “Tottenville,” a 792-lot subdivision east of Cortez, a hearing before the planning commission, and won their reluctant but unanimous consent.

“If you don’t submit a bunch of this [information], it’s going to be hard for them to make a decision,” warned Commission Chair Gerald Koppenhafer. “I don’t have any problems sending it to the planning commission, but if they don’t like what you submit, they’re going to reject it.”

The hearing date had not been scheduled as of press time, but the hearing is likely to draw a great deal of comment, if early meetings on the topic are any indication. 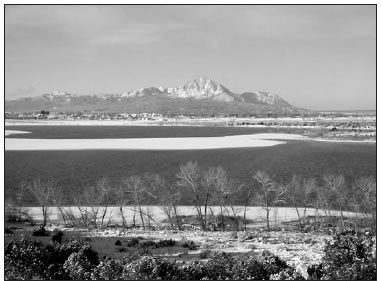 The area to the north and east of Totten Reservoir (shown here with the western shore in the foreground) would become the home for a 792-lot “eco-village” if plans for the development are approved.

When Matthews held an informal, informational meeting on Nov. 12 to talk about his plans for Tottenville, about 70 people showed up. And a crowd of about 25 came to the commission meeting late on Nov. 24 just to listen to the procedural debate on what Tottenville’s next step would be.

Matthews and the landowner, Scott Tipton, submitted an application to the county on Oct. 23 asking for urbanservices zoning on 475 unzoned acres near Totten Lake. Urban-services zoning is for areas where urban services can be provided; it allows for higherdensity development than the county’s normal three-acre-per-lot minimum.

On Nov. 3, Planning Director Susan Carver sent a letter in response stating that more information would be needed before the application could be considered by the planning commission.

Carver wrote that, because of the subdivision’s potential for significant impacts, the county needed more specifics, including, among other items:

• Preliminary-plan maps with more detail than the original submittals; • A traffic-impact study;

• Evidence that the Colorado Department of Public Health and Environment had approved plans for Tottenville’s sewage-treatment proposal;

• A preliminary draft of protective covenants;

“Your application is considered incomplete as you did not submit the required submittals. . . Therefore, no further processing of the application shall occur until the deficiencies are corrected,” Carver wrote.

But Matthews’ attorney, Kelly McCabe, told the county commissioners that requiring so much information before the zoning was approved was “getting the cart in front of the horse.”

Commissioner Steve Chappell, however, used the same metaphor to describe what Matthews was seeking. “This is certainly a different approach,” he told Matthews. “It’s the cart before the horse. You’re asking the [planning] committee to make a decision without knowing what’s going to happen.”

The argument, which continued for an hour and a half, centered on whether the decision to grant zoning to a tract of land is important enough for the county to require detailed information before that decision is made, or whether the detailed studies can be provided later, after the zoning has been granted and a final plan is being considered.

McCabe and county officials debated the requirements of the county’s land-use code and state law. McCabe said Carver was asking for a “site-specific development plan” and that Colorado law said “once you get a site-specific plan approved, you have created vested rights.” He said this was too early in the process to be requiring such a plan.

But Bob Slough, attorney for the commissioners, said the land-use code does allow planners to require more information if they need it in order to decide zoning. He said the term “site-specific development plan,” which was used in Carver’s letter, should not be used when talking about a zoning application, but that her request for more information is “very appropriate to bring these issues out.”

Matthews argued that all he needed in order to apply for zoning was an application form, map, proof of ownership and a pre-sketch plan, and he had submitted those. He said doing the studies that Carver was asking for would be very costly.

“What’s being proposed is bigger than the town of Mancos and the town of Dolores,” Harrison said. “It’s building a city. What Susan has required is very necessary stuff for building a city from scratch. Fifteen years from now [the projected buildout period], we have a new city in the unincorporated area of Montezuma County that the county’s responsible for, with no city council and no town board to take care of things.

“When Susan asked me to read this letter, I thought she was being easy on them.”

Planning-commission member Jon Callender, present at the discussion, said the planning board had met preliminarily with the applicant and had also asked for more studies. “I person- ally will ask for the information in that letter before I could possibly make a decision,” Callender stated.

Some of the major concerns that county officials had were Tottenville’s traffic impacts and the viability of its sewage-treatment system, which would include sewage lagoons.

Carver said all she had was third-hand information from Matthews that he had talked to the state health department and Colorado Department of Transportation, and that he would need to show that he had state approval for Tottenville’s central sewage system and for highway access.

Matthews insisted that he could not get the health department or CDOT to give him permits until he has the zoning in place, so he knows how many units he can have.

At the moment, traffic from Tottenville is slated to have highway access from Highway 145 through existing city subdivisions. Matthews said he has a letter from the city of Cortez stating that the city’s streets are adequate to handle traffic coming from the subdivision onto Fairway Drive, Golf Course Lane, and Eagle Drive (yet to be built).

Carver, however, said she interpreted that letter differently.

In fact, the July 15 letter from Jack Nickerson, public-works director for the city, states, “While access would be allowed, traffic impacts created by your development would have to be mitigated by you, based upon the trips generated by the development. Prior to approving such access, the City would require a copy of the Traffic Impact Study in order to determine potential impacts to City streets.”

Slough commented on the drainage issue, noting that the Lakeside development near Totten Lake has its own sewage system and has for years had septic problems that have never been completely resolved, sometimes necessitating county intervention.

He said groundwater in the area around Totten Lake may be lower than normal now because there have been seven or eight years of drought, but if several high-precipitation years should occur, the groundwater level would rise near the surface. “It’s a huge problem out there and a potential liability to the county relating to approving anything out there, and you need some serious information before you approve any of that,” Slough said.

But Matthews said this was not the time for him to provide such detailed information. If he gets the zoning he seeks, he said, he will then prepare a detailed preliminary plan, with all the required studies, and present that for county approval. “If I have to do a complete drainage study I have to design every house and commercial building 15 years from now,” he said. “It’s a two-year, $500,000 process just to see if I get zoning.”

He said if the county doesn’t like the plan he presents, it can turn him down at that point. However, the tract would still carry urban-services zoning.

“So you’re saying if the contingencies aren’t met, the zoning goes away?” Chappell asked, as the room full of people shook their heads no.

“Zoning doesn’t mean anything from an attorney’s standpoint,” McCabe said.

McCabe said he had only meant that zoning doesn’t grant vested rights, to which Slough agreed.

Matthews was insistent that he wanted to be able to take his case to the planning commission, and that he would offer all the information he could.

The planning commission will make a recommendation, but the final decision is up to the county commissioners.