Two tribes come together to revamp the Four Corners monument

The good news is the Four Corners Monument has finally undergone a much-needed renovation.

The bad news is that the renovation was much smaller than originally envisioned and doesn’t include running water or electricity. 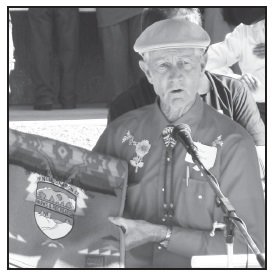 Cleal Bradford, former director of the Four Corners Heritage Council, is recognized Sept. 17 for helping to bring about improvements to the Four Corners Monument. Photo by Susan Thomas/Geotourism Stewardship

Still, the $1.1 million project represented the culmination of years of planning and a successful effort by the Navajo Nation and Ute Mountain Ute Tribe to overcome disagreements in order to accomplish a long-held goal.

“We have been working on this since 1993, when we first had the idea to make improvements here,” said Martin Begaye of the Navajo Nation at the Sept. 17 dedication of the new plaza where four states meet. Begaye and Manuel Heart of the Ute Mountain Ute Tribe were co-chairs of the project team.

“It has been a long and arduous journey,” Begaye told the assembled crowd on the bright, windy day. “There have been setbacks. There have been times when we just let the project sit for months and months because there were some obstacles that we encountered.”

In 1999, Congress appropriated $2.25 million for a large-scale revamp of the landmark on the condition that each of the four states also contribute approximately $500,000 apiece. In 2003, Colorado became the fourth state to pledge its share, and the project appeared to have a full head of steam. The Four Corners Heritage Council, created in 1993 to work on heritage tourism projects in the region, was set to disburse the federal funds and oversee the work.

Plans included an interpretive museum that would educate tourists about Native American culture and the Southwest. In addition, permanent vendor booths, an amphitheater, restrooms with running water, and electrical power for lighting and vendors were planned.

But the effort stalled repeatedly as the Navajos and Utes, who share ownership of the monument area, disagreed over boundaries and the division of monies. Eventually New Mexico and Utah withdrew their funding and Colorado pulled out of the Heritage Council.

However, the project’s proponents persisted, finally managing to bring about a Memorandum of Understanding between the Diné and the Utes late in 2009 for a scaled-down renovation.

“People said it would never happen, but the challenge was there to create a partnership of all Southwest entities – the federal government, state governments, and two tribes – to share a goal for a win-win project,” Heart said.

Also finished are brick vendor booths on the Colorado side that replaced some of the old plywood booths. The tribes are seeking funds to renovate the old booths on the other sides, Begaye said.

There is still hope of someday building the long-envisioned interpretive center and a paved parking lot.

Heart told the audience the interpretive center will be on the New Mexico- Colorado state line and will have electricity and running water. “It will give us, the two tribes, the chance to teach and tell our true values,” Heart said.

Many individuals were thanked for their part in the project, but Cleal Bradford, former executive director of the Heritage Council, was specially recognized by the Utes and Navajos for his unflagging efforts. The two tribes gave him commemorative woven blankets.

Bradford, who had told the Free Press in 2009, “I just hope I live long enough to be able to go down there and see a ribbon-cutting,” said, “This has been the most fun summer of my life as I’ve participated in this project.”

Randy Bloom of the National Society of Professional Surveyors, was on hand to announce that, contrary to previous reports, the monument is in the right location. “The good news is that this monument is truly in the right place,” Bloom said “The bad news is, I don’t care what your GPS receiver tells you, we’re not going to move this thing. It’s going to be here forever.”

James Dion of the National Geographic Society announced that the society is creating a participatory web site and hard-copy map guide for the region. People can go to www.fourcornersgeotourism. com to nominate places in the Four Corners for inclusion in the map.