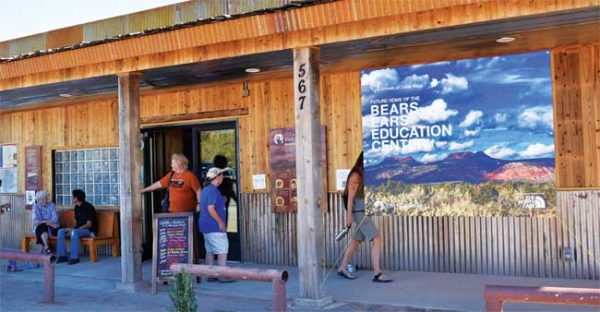 The nonprofit Friends of Cedar Mesa opened the Bears Ears Education Center on Sept. 22 with a day of festivities. Photo by Gail Binkly.

Bluff, Utah — Nearly two years after its creation, Bears Ears National Monument remains mired in controversy. Originally 1.35 million acres in size, it was reduced by 85 percent by President Trump in December 2017. That action is still being challenged in court.

But whether the monument remains at its current size of two relatively small parcels or is ultimately restored to its original vision, the nationwide debate and publicity have forever put it on the map, “with skyrocketing numbers of tourists threatening sensitive archaeological sites,” as a press release from Friends of Cedar Mesa put it.

With that in mind, Friends, a nonprofit conservation group based in Bluff, Utah, set out to provide education to help mitigate the impacts of all the visitors.

On Sept. 22, the group opened the Bears Ears Education Center in a building on the outskirts of the town that used to house the Silver Dollar Bar, an establishment catering to uranium miners and oilfield workers in the 1950s, ’60s and ’70s.

“This is the most ambitious thing we’ve ever done,” said Josh Ewing, executive director of Friends of Cedar Mesa, at a party that capped off a day of lectures, tours and demonstrations celebrating the new center. “Nine months ago, there wasn’t a working septic system here.”

The group raised money to buy and renovate the building at 567 W. Main St. in the newly incorporated town. Modest though it is, it will probably serve as the monument’s visitor center for a number of years, Ewing said.

The center includes educational exhibits, a resource library, a conference room, and a small store. It aims to show visitors how to enjoy the scenic, archaeology- rich area without damaging sensitive cultural, historic, and paleontological sites.

“Bears Ears deserves to be celebrated and visited with respect,” Ewing said. “This is not a playground. It’s a sacred space.”

The center opened without the benefit of any government money. More than 3,000 individual donors from around the nation contributed to the project, along with companies in the outdoor industry and charitable foundations such as the Lewis Family Foundation, the Kendeda Fund, and the George S. and Dolores Dore Eccles Foundation.

Ed Kabotie, one of the guest lecturers on Sept. 22, spoke briefly about environmental issues affecting Native American nations in the Four Corners area. “To me it’s just touching and moving to see what you guys are doing,” he said.

He said people are losing their ties to the earth. “It’s the spirituality, the reconnection that we’ve lost,” he said. “We don’t know the cycles of the sun and moon any more.” 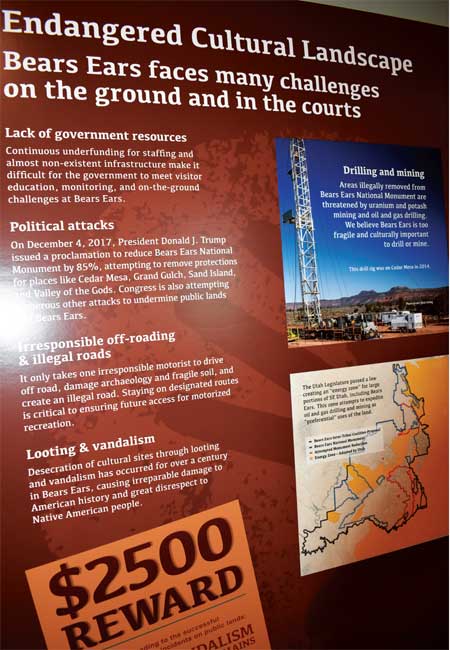 Exhibits in the center are aimed at teaching
visitors to protect the monument’s resources. Photo by Gail Binkly.

Kabotie, who also provided live music for the party with the group Tha ‘Yoties, then played a version of the Bobby McFerrin song Don’t Worry Be Happy that includes lines such as, “Peabody coal has been full of lies; they say, ‘we don’t know why your streams run dry,’” and concludes, “Don’t worry – be Hopi.”

Rob Gay, education director for the nonprofit Colorado Canyons Association, gave an enthusiastic talk on the plentiful fossils in the Bears Ears area.

“Just as numerous [as cultural artifacts] but maybe not as well understood by the average visitor is the paleontology,” Gay said, adding that there is “300 million years’ worth of stories” in the greater monument.

The area includes “super significant” fossils such as reptile and amphibian tracks, including a set of tracks showing a predator and prey interaction, one of just three such sites in the United States.

He said there has been considerable looting of fossils done from the Morrison Formation, a type of sedimentary rock from the Upper Jurassic Period – especially west of Blanding. “Some of it is very professional,” he said.

Almost all of the Morrison Formation lies in the excluded areas designated by President Trump, he said. “It’s no longer in the monument though it’s suffering the most looting.”

But the mood was festive at the gathering, with supporters of the monument saying even the designation of the smaller area was a step in the right direction.

The BLM and Forest Service have released draft plans for managing the Indian Creek and Shash Jáa units of Bears Ears National Monument and are taking public comment until Nov. 15. The draft documents are on the BLM ePlanning website at https://goo.gl/EHvhbc.

The Bears Ears Education Center will be open from 9 a.m. to 5 p.m., Thursdays through Mondays. It will close Dec. 1 for the winter and reopen for Celebrate Cedar Mesa Weekend, which starts March 1.