What to do with weeds? Durango’s Katrina Blair argues that these unwanted plants can be beneficial

This is the first in a series of occasional articles related to weeds and weed management. Finally, spring is here and many of us are digging into the dirt – ready to plant things we hope to see grow and bloom. But what about all those plants we don’t have to seed and nurture – the weeds? What is a weed anyway?

“What is a weed? A plant whose virtues have not yet been discovered.” — Ralph Waldo Emerson

“A plant that is not valued where it is growing and is usually of vigorous growth; especially one that tends to overgrow or choke out more desirable plants.” — Merriam Webster

“Noxious weeds are more than plants out of place; they are non-native plants that are disrupting our native vegetation and ecosystems.” — La Plata County Weed Management Program 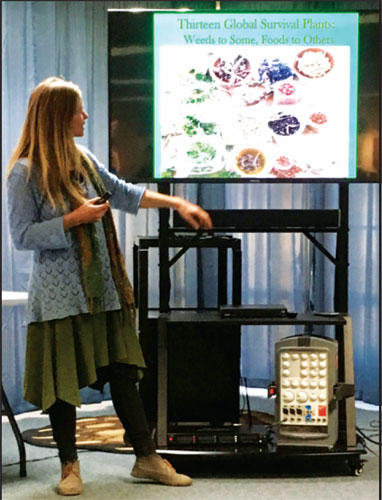 Author Katrina Blair, who argues that weeds can serve useful purposes, gives a presentation at the Cortez Public Library on March 14. Photo by Janelli Miller.

Katrina Blair, author of The Wild Wisdom of Weeds (2014, Chelsea Green Publishing), was at the Cortez library on March 14 as a part of the “Amazing Authors” series. During her presentation participants were treated to flax-seed crackers with dandelion pesto, dandelion apple juice, herbal chocolates and macaroons – all made with raw ingredients containing plants we think of as weeds.

Blair said she grew up with a hand-stitched frame of Emerson’s definition of weeds hanging on a wall, and she thinks that influenced her, as her life’s work has been to discover – and utilize – the many virtues of weeds. She shared her knowledge about the “wild 13,” including a short history of her experiences and information about her work with Turtle Lake Refuge and Turtle Lake Café near Durango.

“They are often the first or second pioneer plants that can thrive in disturbed or compacted grounds where native plants can no longer survive,” she explained. “Over time they break up the compacted ground, aerate the soil with their deep taproots, and compost their leaves each season helping to regenerate the disturbed land… They eventually will create a more fertile landscape for the next plant in nature’s succession.” In order to be called a “noxious weed,” a plant has to be non-native and have one of the following characteristics:

Even some native plants are poisonous, including:

Blair recommends that anyone interested in plants first learn the ones that are poisonous. There are not many, and most are easily identified. Once a person has learned the poisonous plants, she advises, “Start tasting the earth – it’s an incredible garden!”

Blair believes our connection with plants is important. “When we eat wild foods as a community we become stronger. It’s powerful.”

She explained this as her assistants passed out morsels of her “Wild Weed Truffles”: plantain pine needle, amaranth chili, dandelion lemon, lambsquarter rose, knotweed chai, and mallow mint. There wasn’t a person in the room who was not happily munching in agreement.

But most people think of weeds as something to get rid of, not eat. Indeed, the primary goal of county weed-management programs is to manage and/or eradicate “noxious” plants. This includes educating landowners about weeds and their impact, along with plant identification and information about different types of eradication plans. The state of Colorado has a Noxious Weed program as well as a Weed Free Forage program, which inspects forage and mulch for weeds. It also recommends Certified Weed Free Companies selling wheat straw, alfalfa, grass, and other types of forage and mulch. Locally, Southwest Seed in Dolores offers one of the widest varieties of weed-free products, including mutton grass, Indian rice grass, arriba Western wheat, blue gramma grass, side oats, and gramma.

The usual strategies for weed management at the state and county levels are first to educate the public about what plants are considered weeds, then help landowners identify and eradicate them. In 1990, Colorado’s legislature tasked the State Department of Agriculture with enforcing regulations pertaining to the control of noxious weeds with the Colorado Noxious Weed Act, 35-5.5- 101-119 C.R.S. The act made it unlawful to intentionally introduce, cultivate or sell noxious weeds, and directs counties and municipalities to implement weed management plans, with county management plans designed and administered by local county commissions.

As a part of this regulation, certain plants have been categorized into three lists. List A plants are designated for elimination on all county, state, federal and private lands. List B includes plants whose continued spread should be stopped, and List C plants are selected for recommended control methods. All plants on these lists are mandated to be controlled under the Noxious Weed Act; however, not all of these plants are present in all parts of Colorado.

“The term “weed” does not always indicate that a plant is totally undesirable, or that it cannot be beneficial under certain situations.” — Whitson, et al, Weeds of the West

Eradication is a kind of extreme measure – especially considering that plants become weeds only because they are “interfering” with desired human activities. Blair is an advocate for changing the way people think about weeds. She is in agreement with weed management programs that encourage people to be stewards of the land and to take responsibility for the impact of their actions upon the environment. But Blair has a different perspective when it comes to land “degradation” and plant “eradication.”

“The degradation of the land already happened by the overuse of human activities,” she said. “The weeds are a sign of nature coming in to regenerate the land’s previous disturbance. It is our responsibility as land stewards to help the land regain stability.”

Blair believes plants teach us how to live and become masters of our health. She notes that her experience in observing and ingesting plants for more than 30 years has given her a different point of view about so-called weeds.

“Nature is my best teacher,” she says.

According to Blair, wild plants are not only regenerative, but exist due to thousands of years of evolution and have an “innate intelligence” that can be accessed if people respect them and use them in a sustainable manner.

“We don’t consider anything a weed,” she laughed. Instead of thinking about eradication, Blair suggested that using the term “harvest.” “It’s such a different attitude,” she said, “when we harvest the weeds, we are giving thanks to nature’s abundance.”

Blair said it’s valid to think of weeds as something that need to be controlled, but encourages people to see “weeds are the problem” as a limiting perspective. Instead, she believes weeds are the solution. They help the land reclaim itself from human disturbance.

“We have to help the land return to its past fertility and stability before the land-altering disturbance,” she said. “‘Invasive’ weeds support the evolution of land toward a future stability and will increase soil fertility over time. Weeds help do this at nature’s pace.” In her point of view, it is best to harvest or move the plants considered troublesome.

She said applying herbicides continues to disrupt the soil ecology and mycology and furthers disturbance, which in turn encourages more weeds to grow. “It is a common practice to continue to spray every year because weeds come back where there is more disturbance. We observe this pattern by noticing that the amount of herbicides being sprayed each year across the county has been increasing, not decreasing. The common practice of driving ATVs on the land to spray weeds causes further disturbance by compacting the soil, and the plants that are growing to help regenerate the land are killed back for a season.”

Blair said weeds actually contribute to soil fertility and stability. “Their deep taproots pull minerals out of the ground and deposit them onto the surface each year. These plants make fantastic mulch, especially if you can pull them before they flower.”

Blair supports weed mitigation, explaining that many of the plants can be used as medicine and are also quite nutritious when eaten. “The weed plants are often more nutritious as food or medicine than anything we can buy in the supermarket.”

Although the plants in her book are not on the state ABC lists, except for thistle, she said some of the listed plants are useful. “We use all the varieties of thistles for making chai tea, mullein for a local smoking ingredient, hounds tongue for making healing salves, and oxeye daisy for salad greens. Bindweed is a laxative,” she noted. Others that have historical medicinal or food use include chicory, burdock, chamomile, and sage.

“The basic idea is that we are aiming to work with nature rather than against it with our weed practices,” said Blair. She is currently working with Bee Happy Lands doing weed mitigation managing 600 acres around Electra Lake, 560 acres in the Telluride Valley Floor, as well as with homeowner associations and other private landowners.

“We do not try to eradicate the weeds; instead we encourage other plant species to thrive in their place. Our method is aiming for the long-term solution. Landowners will see an immediate change from our work because we remove the big patches of noticeable weeds. Even though the weeds return the following year, they will diminish greatly in two or three years.”

The Montezuma County Weed Program lists several weed-control methods besides spraying, including biological controls (usually insects); cultural controls such as cultivation (cutting through and turning over the soil), re-seeding, fertilizing and irrigating; livestock overgrazing, mowing and cutting, prescribed burning and pulling. The county also has a no-spray agreement that landowners can sign and submit to petition the county to refrain from spraying herbicides on their land. The landowners must indicate their methods of control and are provided with the plant lists and legal obligations for weed eradication.

Blair speaks of weeds as guides. “The plants don’t need to be eradicated – they just need to be respected. Weeds act as midwives in the very beginning – they provide shade and protection.” She is a firm believer in plant succession, with primary-succession plants coming into an area when nothing else will grow there – such as after a fire. “They are adapted to establish life in a barren landscape.” Secondary-succession plants grow in disturbed areas, often caused by human development.

Blair has devoted her life to her cause She is happy to explain her point of view and share her wild foods. She invites anyone to come to her café, visit Turtle Lake Refuge, ask questions, taste plants, and learn about the relationship between plants and nature.

Next time you are in the yard, instead of cursing at that dandelion as you strain to pull its deep root, or helplessly watch millions of its tiny seeds scatter across your lawn, stop, take a breath and consider this. If you ate that dandelion it would keep you alive, providing all the nutrients you need to survive – at no cost!

“It is important to note that the weeds are not the problem, but actually nature’s solution to humanity’s land disturbing practices such as development, over-grazing and general living impacts.”

Read the second article in the series: War of the Weeds.