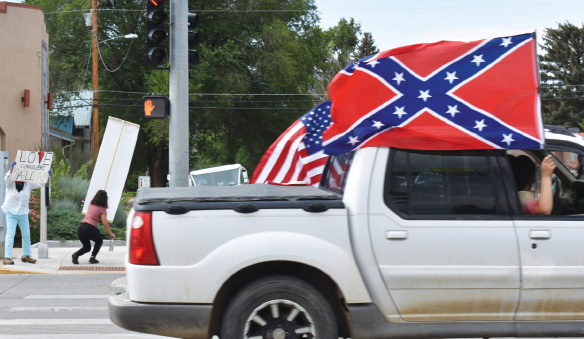 Counter-protesters drive through Cortez one Saturday in August. Photo by Gail Binkly.

Probably the most effective way of making it crystal clear in most people’s minds that you are a white supremacist is by flying a Confederate flag – the bigger the better – in your front yard or on your vehicle.

This view hardened into a concrete belief while I was watching a parade of gaily befurled vehicles travel up and down Main Street in Cortez one recent Saturday morning. A couple dozen huge pickup trucks, along with two- and three-wheeled Hogs and a few classic roadsters, roared through the heart of town, engines redlining and spewing smoke while the occupants fist-pumped and yelled imprecations that were mostly unintelligible over the racket.

From what I’d seen on social media, their intent was to show support for our police and first responders and so on, but their decked-out rides displayed mostly Old Glorys along with a scattering of “Don’t Tread On Me” and even a few – and here’s the real raw rub – Confederate flags, whose connection with police and first responders is tenuous, to say the least. (There was even one hybrid – half American/half Confederate – which struck me as strange indeed, sort of like standing with one foot in the U.S. and the other in . . . pre-Mandela South Africa, maybe.)

Now, there may be some who argue that flying the Stars and Bars has nothing to do with white supremacy, that displaying it is more about preserving Southern Heritage, keeping alive the memories of those more genteel times of hoop skirts, whoopde- do and other harmless hoopla that one and all greatly enjoyed in those simpler times.

And, on a more serious note, it is intended to pay respect to the stout souls who died trying to make our Southern states a . . . ahh . . . well . . . separate but equal country, wasn’t that the idea? One where yet today white-goateed colonels would be sitting on the broad verandas of their plantation houses sipping mint juleps served up by genuflecting house servants, while those of lesser rank and darker skin tone plucked cotton bolls and sang Gospel.

After all, isn’t the final tally around a quarter of a million Johnnie Rebs who fought all the way to Cemetery Ridge to keep those darkies in their proper place? Certainly wouldn’t want to forget about that.

Some might even contend that flying “Old Gory” is a proud declaration that they will never let that valiant effort fade from our national memory – if you don’t learn from history, and all that.

So, lessee . . . Confederate-flag flyers want the rest of us good citizens to always remember that after four terrible years of the occasional brother setting his sights against brother – and lots and lots of cousins drawing beads on their own kinfolk as well – after all that futile slaughter, the pearly white reality of a Southern confederacy never came to pass. We are supposed to never forget that legions upon legions of Dixie’s finest died for an exceptionally bad idea whose time is, even today, far too gradually being laid to rest, is that it?

The grand message is to remember for all time that the stillborn Confederacy and the tragic war it spawned was a horrible mistake?

If so, if I’m not completely misunderstanding the flag-waving, it still seems to me like a mighty strange way to go about it. It seems to me there might be far better ways to snuff out the last vestiges of that two-tiered master/slave society – like people doing all they can to help those who have been for centuries suppressed and/or ignored because they held little power – political or economic – to attain truly equal footing with the rest of us.

On the other hand, could the flag flyers be trying to remember the aborted Confederacy as something good? If so, it’s a little difficult to figure out what was in any way, by any measure, good about it or how it meshes with patriotic support for the United States. The South tried to split America in two. It supported slavery. It was the losing side in a battle that needn’t have been fought to uphold the principles of the U.S. Constitution, ideals that are still to be fully fulfilled. What about it prompts such urgent nostalgia?

Commemorating the losing side in a war is a little unusual. We don’t erect statues of King George III, do we? We don’t fly the British flag. So why are we so rah-rah about promoting the losers of the Civil War – particularly in Colorado, which sits far from the Old South?

I don’t have a window into anybody’s trove of private thoughts. Perhaps the aficionados of the Confederate flag possess the most charitable and Christian thoughts any product of Western culture could harbor. Maybe they do love others in that selfless way Jesus instructed us to practice. It’s certainly possible they anonymously give of time and fortune to better the lot of the downtrodden – all the downtrodden.

Still, there is no denying that a vast majority, silent or not, of those who see a Confederate flag rippling and snapping in a stiff breeze are not going to mull long and hard about what finely nuanced message the flyer might be trying to communicate.

They are going to make the following assumption just as soon as they see the flag:

It represents someone who is extremely (and I do mean extremely) dissatisfied with the snail’s-pace direction our society is heading – and not because it’s moving far too slowly toward social justice.

David Long is a co-owner of the Four Corners Free Press.