Will ‘Not of This Fold’ mean no longer of this flock?

Will she or won’t she?

As in, will bestselling mystery author and practicing Mormon Mette Ivie Harrison be excommunicated from the Mormon Church or won’t she? In the course of four Linda Wallheim Mormon Mysteries set along Utah’s Wasatch Front over the last four years, including just released Not of This Fold (Soho Press), Harrison has used the mystery genre to lift the veil on life as a woman within the present-day Church of Latter Day Saints. 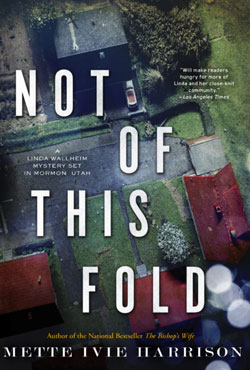 Not of This Fold takes series protagonist and amateur sleuth Linda on a hunt with her younger Mormon friend Gwen for the killer of Gabriela, a Hispanic single mother who was a member of the Mormon Church’s so-called Spanish Ward in the working-class Salt Lake City suburb of Draper.

Before her murder by strangulation at a local gas station, Gabriela’s final phone call was to Gwen, and the dead woman’s voicemail reveals she knew she was in danger. Gwen concludes the police aren’t doing enough to get justice for Gabriela and decides to find the killer herself. Fearing for Gwen’s safety, Linda reluctantly joins Gwen in her vigilante sleuthing.

While tracking the killer, Linda and the more liberal Gwen spar over the strictures placed on them by their church and, in nearly equal measure, their husbands. As such, Harrison uses the characters of Linda and Gwen in Not of This Fold to represent two sides of the debate underway among Mormon women about their place in today’s LDS Church.

The mother of five young-adult sons and a new grandmother, Linda abides by a can’twe- all-get-along approach to the Mormon life she was born into, and to which she remains deeply committed despite the obvious faults she sees in her church, the bedrock of her life. After all, questioning her religion would threaten everything she holds dear: her marriage to her loving, if condescending, husband, a lay bishop in the church; her high standing — for a woman, at any rate — in the church as a bishop’s wife; even her continued regular visits with her baby granddaughter.

Childless Gwen, her marriage collapsing, has less to lose and is therefore more willing to call out the church for what she sees as its overt sexism, homophobia, and racism.

Harrison’s frank views of the Mormon Church as expressed through the characters in her books have resulted in whispers that the author might be on the verge of excommunication. Whether Harrison’s fourth, eye-opening look at the perceived faults of the Mormon Church is the one that results in her banishment from the church remains to be seen. What is clear, however, is that, through Not of This Fold and the previous three books in the Linda Wallheim series, the light Harrison is shedding on her church from within — at least for the time being — makes for fascinating reading for anyone curious about the inner workings and questionable dictates of today’s Church of Latter Day Saints.

Scott Graham is the National Outdoor Book Award-winning author of the National Park Mystery Series for Torrey House Press. The fifth book in the series, Arches Enemy, will be released in June. Visit Graham at scottfranklingraham. com.