Wilson proud of his record as DA

When Jim Wilson, incumbent candidate for district attorney, talks about crime, his enthusiasm for public service and dedication to enforcing the law are undeniable.After a four-year term as DA, Wilson is hoping to continue his role as the top prosecutor for Montezuma and Dolores counties, which make up the 22nd Judicial District. Wilson, a Republican, faces a challenge from Democrat Mac Myers. 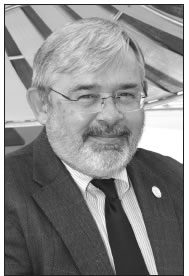 “My day-to-day operations in this community and my understanding of the commissioners, budget limitations and the people of both counties make me more qualified for the job,” Wilson said during a phone interview.During his term Wilson and his staff were called to deliver justice when a influx of heinous crimes occurred, including several murders, a patricide and a drunk-driver crash that resulted in the death of 16-year old Amanda Degagne“We’re a very small office but we get hit with very big problems,” he said.In the Degagne death, Wilson emphasized “that I am directly responsible for the person who killed her still being in jail.” He said her case led to tougher sentencing procedures in the state regarding crimes with aggravating circumstances.Originally the case against defendant Travis Lopez was overturned because under a plea bargain he was sentenced within the more severe aggravated-circumstance penalty range without the benefit of a trial.But a successful appeal by Wilson led the Colorado Supreme Court to rule that convicted criminals such as Lopez and Terry Barton (who started the Hayman Fire) could be sentenced in the aggravated range, if certain criteria are met, without a jury trial.Lopez is serving a 20-year prison sentence. Without the aggravated circumstance component, Lopez could have only received probation because it was his first felony.“In terms of lawyering, getting that ruling was a highlight for myself and my staff,” he said. “We established the procedure that a judge could find aggravated circumstances without going to a jury trial.”Another successful prosecution under Wilson’s term was the Aric Miera trial. Angered over a divorce case, Miera shot and killed attorney Richard Luhman while he was working in his Market Street law office. Due to a breach of behavior during jury deliberations, the case had to be re-tried, but the verdict eventually landed Miera with a life sentence without parole.Wilson faces challenger Myers, a two-term elected DA from the 9th Judicial District headquartered in Glenwood Springs. Myers, now a Mancos resident, has criticized Wilson for not taking more cases to trial.For example, Myers believes that confessed murderer Shawn Walker, 34, should have gone to trial for firstdegree murder, but received a pleabargain for second-degree murder for the shooting death of Alfonso Raul Sena. Walker was sentenced to 28 years in prison; a first-degree conviction would warrant 48 years to life in prison or the death penalty.“With all due respect to Mac, he didn’t look at the evidence and he didn’t handle the case,” responded Wilson. “I feel like we did justice on that case, taking into account the severe limitations we were having.”Wilson said the plea bargain was necessary because of evidence and witness-credibility problems, intoxication levels and Walker’s reported intention of retracting his confession. Chief Deputy Attorney Keith Mandelski told the Cortez Journal that “first-degree murder would have been hard to prove because of the high level of intoxication at the time of the offense.”Allegations that the district attorney’s staff is inexperienced also drew a response from Wilson. He said his two felony attorneys are younger but are learning “by leaps and bounds, so over the last four years I’ve maintained good quality prosecutors in the courtroom.” Experience is relative, Wilson continued, noting that one of his lawyers has 16 years of tort-law experience, “so now for the first time I have the civil experience that I can draw upon.”Regarding the perception that he does not take cases to trial frequently enough, Wilson said those decisions are made carefully.“I’m not about carving notches in my gun. I think it is a misuse of the system if what you’re doing is going to trial simply to go to trial because you stereotype a person perhaps unnecessarily, and that stereotype stays with the person no matter what happens with the jury trial,” he said. “[The DA’s office] can hurt people so we have an obligation to make sure that if we go to trial it is the right reason and the right case.”Like Myers, Wilson also had his ups and downs while serving as DA. During his term:• He has struggled with high turnover in his office. Wilson explained that heavy work load and the grim nature of dealing with violent crimes takes a toll on people emotionally, often causing them to leave. Also, budget constraints and the limited labor pool in rural areas make it difficult to find highly experienced workers. “I tell my new deputies that I cannot pay you what you could make somewhere else, but I can give you the experience and the training,” Wilson said.• Wilson reports a strong prosecution record for cases of sexual assault on children. As a St Louis police officer, Wilson said he investigated 200 such cases per year.• Wilson reports that in the last two years his office has averaged a 94 percent conviction rate for DUI cases. Also, domestic-violence cases are running at 43 percent conviction rate, which is higher than the national average.Wilson closed by saying he has a good working relationship with local law enforcement. “We don’t always agree, such as when a search warrant is appropriate; however, they have to understand that as gatekeeper I am firm in prosecuting crimes but must also zealously enforce the constitution.”