Winning a seat at the table: An effort to oust San Juan County, Utah, Commissioner Willie Grayeyes from office fails

Willie Grayeyes, in red jacket in the foreground, at a Jan. 22 hearing to resolve the question of his residency. Photo by Ryan Collins/Utah pool

To understand why San Juan County Commissioner Willie Grayeyes’ Utah residency was recently challenged in court, it helps to understand the area where Grayeyes is registered to vote.

Grayeyes was born on Piute Mesa, a remote strip of redrock on the Navajo Nation in southern San Juan County, Utah, and he has held a grazing permit there for decades. Driving from the mesa — which contains roughly 20 modular homes and traditional hogans — to the hamlet of Navajo Mountain, Utah, requires crossing a deep sandstone canyon that can become impassable when wet. And accessing basic services such as grocery stores, laundromats, gas stations, and broadband internet requires an even longer trip across the Utah state line.

With Lake Powell to the north, the 10,300-foot Navajo Mountain to the west, and an maze of canyons to the east, the only roads to the Navajo Mountain and Piute Mesa area go through Arizona. Navajo Mountain is essentially an island of San Juan County land cut off from the county seat in Monticello by a nine-hour round-trip drive.

All of these factors were explored at an all-day hearing over Grayeyes’ residency status in 7th District Court in Monticello on Jan. 22. An audience of 65 packed the courtroom, and at least a dozen others weren’t admitted because the room was full.

The hearing was held in response to a complaint brought by Blanding resident Kelly Laws, a white GOP county-commission candidate who lost to Grayeyes by a nine-point margin in the November election.

Laws’ complaint was the second time in the last year that Grayeyes, who ran as a Democrat and is a member of the Navajo Nation, had his Utah residence formally questioned. Another Blanding resident and Republican commission hopeful, Wendy Black, filed a challenge in March 2018, and Grayeyes’ name was subsequently removed from the ballot by San Juan County Clerk John David Nielson.

Grayeyes sued. In an August ruling, U.S. District Judge David Nuffer found that Nielson and Black improperly backdated a document in order to make the challenge valid. Nuffer ordered Grayeyes’ name be placed back on the ballot, but he did not rule on whether Grayeyes was in fact a resident of Utah.

On Dec. 28, Laws filed a new complaint in district court. Laws cited a doublewide Grayeyes purchased in Page, Ariz., in 1981 as evidence of Grayeyes’ Arizona residence. That house played a key role in the Jan. 22 trial when Laws’ attorney, Peter Stirba, argued the Page home was Grayeyes’ “primary residence” since Grayeyes has owned no other home and since his children attended public school in Page in the late ’80s and early ’90s.

A doublewide in disrepair

Multiple witnesses, including two of Grayeyes’ daughters, testified that Grayeyes last lived in Page during the 1987- 1988 school year, following the passing of his wife. In the decades since, he has traveled frequently while representing the Navajo Mountain area in various posts on the Navajo Nation tribal government and school system.

Grayeyes has also served on the boards of several nonprofits, and only recently left his role as board president of Utah Diné Bikéyah, an advocacy group that was instrumental in President Obama’s 2016 creation of Bears Ears National Monument.

The doublewide has fallen into disrepair.

Several witnesses called by Laws’ attorney, Stirba, disputed Grayeyes’ claim that he spends 60 to 80 percent of his time in the Navajo Mountain area.

In an April 2018 declaration, Grayeyes identified a home on Piute Mesa as his primary residence, but a San Juan County social worker, a Navajo Mountain Chapter official, a sheriff ’s deputy, and Laws all testified that the home was currently occupied by Grayeyes’ cousin, Harrison Ross. Later testimonies from witnesses called by Grayeyes’ legal team confirmed that Ross does live in the home, but its ownership is in dispute. The home used to belong to a mutual relative of Grayeyes and Ross who passed away several years ago, and title to the homesite lease is tied up in probate proceedings in Navajo tribal court.

In an April 2018 declaration, Grayeyes identified a home on Piute Mesa as his primary residence, but a San Juan County social worker, a Navajo Mountain Chapter official, a sheriff ’s deputy, and Laws all testified that the home was currently occupied by Grayeyes’ cousin, Harrison Ross. 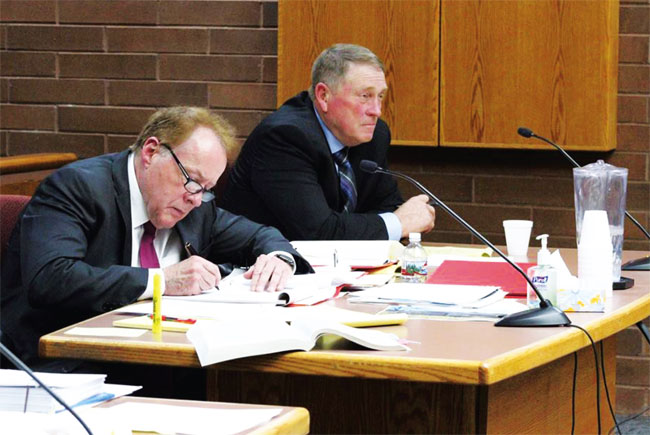 Kelly Laws (right) and his attorney, Peter Stirba, listen to testimony at the hearing in Monticello on Jan. 22. Laws, who lost to Willie Grayeyes in the November election, had challenged Grayeyes’ Utah residency. Photo by Ryan Collins/Utah pool

Later testimonies from witnesses called by Grayeyes’ legal team confirmed that Ross did live in the home; its ownership is disputed and the title to the home-site lease is tied up in probate proceedings in Navajo tribal court.

Laws’ complaint leaned heavily on a police report compiled by the San Juan County Sheriff ’s Office after it conducted an investigation into Grayeyes’ residency in the spring of 2018. Judge Don M. Torgerson, who oversaw the case, decided the report was inadmissible as evidence because its author, Deputy Colby Turk, had conducted an investigation on Navajo Nation land without proper approval from tribal authorities.

Turk is cross-deputized to investigate criminal cases on reservation land, but Torgerson indicated that Turk’s authority does not extend to civil cases. Some of Turk’s body camera footage was later admitted as part of his oral testimony at the hearing.

‘We live in different worlds’

After five witnesses testified for Laws, several elders from the Navajo Nation, including medicine man Johnson Dennison and former Navajo Nation President Peterson Zah, were called to the stand by Grayeyes to discuss definitions of home according to traditional Navajo culture. Stirba repeatedly made objections that cultural beliefs are not relevant to the residency statute, but the judge overruled him each time

Dennison and Zah stated that, for traditional Navajo people, the burial of a newborn’s umbilical cord ties that person to a specific place for life.

“No matter where you go, you always go back to where [your umbilical cord] is buried,” Dennison said. Grayeyes’ umbilical cord is buried on Piute Mesa.

Zah said grazing permits issued by the Navajo Nation are another important indicator of a person’s “home space.”

“We live in different worlds,” Zah said of cultural definitions of home, “and the Navajo world is in many ways different from the non-Navajo world.”

In a order filed on Jan. 29, the court ruled that Grayeyes met the residency requirements according to Utah law. The judge concluded that none of the evidence brought forward was compelling enough to remove Grayeyes from the county commission, and noted Grayeyes’ deep roots in Utah.

According to Utah statute, a person’s principal place of residence is defined as a “single location where a person’s habitation is fixed and to which, whenever the person is absent, the person has the intention of returning.”

Due to the isolation of Navajo Mountain and Grayeyes’ itinerant tendencies (he told Deputy Turk that he’s on the road “almost all the time”), it was difficult to pin down Grayeyes’ place of residence to a single home. Torgerson instead wrote, “‘a single location where a person’s habitation is fixed’ could mean a larger geographical area […] particularly for someone like Mr. Grayeyes who observes traditional cultural practices. He may stay on Pitue Mesa under a shade hut during the summer. Or at his daughter’s cabin. Or at his sister’s home in Navajo Mountain. As long as those all fall within a single voting precinct, that geographical area is sufficient to be a principal place of residence.” Steve Boos, an attorney who represented Grayeyes in both residency cases, said he was satisfied with the ruling.

“The judge did a careful and comprehensive job of analyzing the law and the facts that were presented at trial, and he made the correct conclusion based on that,” Boos said.

Laws could not be reached for comment before this article went to press. Stirba did not respond to a request for comment.

Limited financial resources could stifle a potential appeal, however. Laws said at trial that he waited until the last possible moment to file his complaint because he didn’t think the residency case should be paid for by private citizens.

However, at press time word was received that Laws is indeed appealing the ruling to the Utah Supreme Court.

At an early January town hall meeting in Monticello, Laws said he raised at least $30,000 to hire Stirba initially, even after Stirba told him the case would be an “uphill battle.” Laws estimated the case would end up costing $100,000 for the initial trial.

The 2018 challenge to Grayeyes’ residency was paid for with public funds, and early in 2019, San Juan County settled with Grayeyes’ attorneys for $225,000 to cover costs of that suit.

As the Four Corners Free Press has previously reported (May 2018), the county has spent close to $3 million on legal battles between 2016 and 2018 and could soon face bankruptcy.

In 2012, the Navajo Nation sued San Juan County under the Voting Rights Act for racially gerrymandering its voting districts, and a federal judge ordered the county to redraw its district boundaries in 2017. That ruling led to the election of Grayeyes and fellow Navajo commissioner Kenneth Maryboy in November, marking the first time in San Juan County history that Navajo candidates have controlled the three-member commission, even though Native American residents make up over half the county’s population, according to the most recent census data. The outgoing commissioners appealed the ruling, and the county could be asked to pay millions of dollars in legal fees to the Navajo Nation if it loses.

Leonard Gorman, executive director of the Navajo Nation Human Rights Commission, told the Free Press that the question of Grayeyes’ residency was “settled long ago. It has been settled ever since he was born.”

Gorman sees the repeated challenges to Grayeyes’ eligibility as a commissioner as tied to the history of racial discrimination that led to the voting rights lawsuit.

“We believe that Indigenous peoples are essentially second-class citizens [in San Juan County],” Gorman said, adding that he believes the changes to San Juan County’s leadership won’t be accepted by all residents overnight.

Critics of the redistricting often point to the complications associated with having a large portion of the county in the Navajo Nation. At the January town hall, Laws questioned the incoming Navajo commissioners’ ability to understand basic fiscal concepts because of that mixed jurisdiction.

“What happens when you have two commissioners who have never paid taxes?” Laws asked, presumably referring to the fact that residents of the Navajo Nation lease home sites from the Department of Interior instead of owning land outright. “They don’t understand how taxing works. It’s free money. What happens to your property tax when the county is out of money? It goes up.” (Ironically, the crux of Laws’ attorney’s argument in court a few weeks later was to say that Grayeyes had paid property taxes on his Page house for close to 40 years.)

For his part, Gorman welcomes the shift of political power south to where the Navajo Nation is located. “It’s a long time coming for this kind of shift,” he said. “It was due several decades ago, and it is very unfortunate that we have to not only go through litigation but expend an exorbitant amount of limited resources to arrive at this point in time.”

Zak Podmore is editor of the Canyon Echo Journal in Bluff, Utah.