Norse mythology permeates our Western culture, from the seven days of the Gregorian calendar (four of which are named for the Norse gods Tyr, Odin, Thor, and Frigg) to the symbolism of Biblical Christianity (Odin, the all-father of Norse myth, is crucified on a tree, his side pierced by a tormentor’s spear.) For most of us, exposure to the tales of Thor and Loki, Odin and Heimdall began and ended with the Marvel comic books of our youth, or with their more recent cinematic adaptations. At the other end of the spectrum, translations of ancient texts like the Volospa, the Prose Edda, and the Volsung Saga captured this pre-Christian folklore of the Germanic peoples – the so-called Vikings – who inhabited today’s Scandinavia and preserved it for modern scholars. 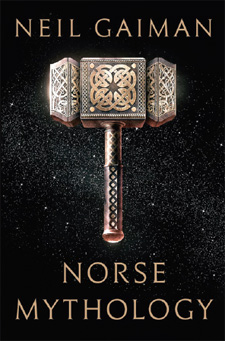 It’s appropriate, then, that British author Neil Gaiman’s writerly influences include both comics and classical literature, and that Gaiman has himself become something of a cultural icon, thanks in part to an avid fan base of over 2 million Twitter followers. So who better than he to straddle the rainbow bridge between comic kitsch and arid scholarship in order to bring the legendary gods of Asgard to a new generation of readers?

Norse Mythology, Gaiman’s 12th novel following such mega-bestsellers as American Gods and The Ocean at the End of the Lane, is chockablock with gods and dwarfs, ogres and trolls, monsters and giants. It spans the eons between the frozen mist world from which all life began and Ragnarok, the final, flaming battle between the forces of good and evil.

Along the way we traverse the nine worlds and meet such memorable characters as Odin, the one-eyed god king whose twin ravens Huginn (thought) and Muninn (memory) circle the worlds to bring him knowledge of all things; and Thor, the mighty thunder god whose magical hammer Mjollnir, the lightning-maker, never misses its target and always returns to his hand.

We meet Jormungundr, the Midgard serpent that encircles the globe and is the son of Odin’s half-brother Loki and the frost giantess Angrboda; and Freya, fairest of the goddesses who wears the golden neckless of the Brisings and whose feathered cloak bestows the power of flight.

Gaiman curates the Norse pantheon to present over a dozen mythic parables for our enjoyment and edification. We learn, for example, how Odin traded his right eye to the giant Mimir in order to drink from the well of wisdom, and how the dwarves Fjalar and Galar brewed the mead of poetry from the blood of the wise god Kvasir. We learn how the scheming god Loki rescued the golden apples of immortality from the changeling giant Thiazi, and how Thor’s feats of strength and bravery won the cauldron of the sea giant Hymir and with it an endless supply of ale for the Aesir’s annual feasts. Lastly we learn the terrible secret of Ragnarok, which marked the end of the god-times and the beginning of our modern world.

While his is certainly not the first book to ply these icy waters – works by Kevin Crossley-Holland, John Lindow, H. R. Ellis Davidson, E. O. G. Turville-Petre, and Roger Lancelyn Green, among others, precede him – Gaiman’s Norse Mythology ($25.95, from W. W. Norton) is a timely treat for readers of all ages, a welcome addition to the canon, and a perfect companion for those cold winter nights when the whistling wind or the hoot of an owl leads a cabin-bound dreamer to wonder, what if ?

Chuck Greaves is the author of five novels, most recently Tom & Lucky (Bloomsbury), a WSJ “Best Books of 2015” selection and a finalist for the 2016 Harper Lee Prize. You can visit him a www.chuckgreaves.com.