Women of protest — the 100-year anniversary 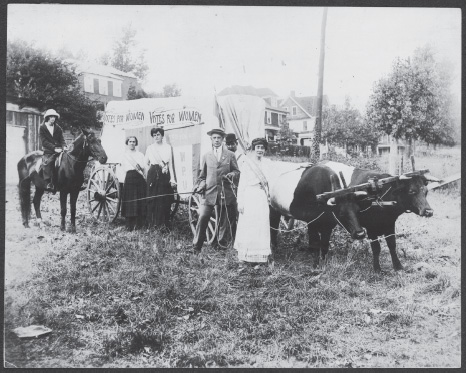 2020 is the centennial anniversary of the passage of the 19th Amendment, protecting women’s constitutional right to vote, and allowing women to exercise that legal right. Fact: The 19th Amendment never directly mentioned women. The text actually states, “The right of citizens of the United States or by any State on account of sex. Congress shall have the power to enforce this article by appropriate legislation.” This historic anniversary offers an opportunity to not only commemorate this milestone in democracy but to explore its relevance to issues of equal rights today.

Interestingly enough, the Constitution is a gender-neutral document. The word ‘male’ did not even appear in the Constitution until 1868 when the Fourteenth Amendment was ratified. Even before that amendment there was nothing in the original Constitution that directly barred women from voting.

We are familiar with the saying that it takes a village. In the fight for women to be able to exercise their right to vote, that certainly was the case. Some of us are familiar with people like Alice Paul, Elizabeth Cady Stanton, Susan B. Anthony, Amelia Bloomer, Antoinette Brow Blackwell, Harriet Stanton Blatch, Carrie Chapman Catt, Charlotte Perkins Gilman, but there are so many more. It did take a village for women to gain the right to vote.

Many people do not really know or understand that struggle. In 1999 a survey was done by General Motors (they were going to fund the movie “Not for Ourselves Alone,” the story of Stanton and Anthony) asking the general public who Elizabeth Cady Stanton and Susan B. Anthony were. The results were shocking! Less than 1 percent of those surveyed could identify them as connected to women’s rights.

I have enjoyed digging around in the archives and finding women who also worked tirelessly for the right of women to vote. There are so many and most completely unknown. I was surprised to find that the fight to vote took place in 57 countries other than the United States.

Janet Ayer Fairbank is just one of those women. She was born on June 7, 1878, in Chicago, Ill. She attended private schools and graduated from the University of Chicago in 1900 and married Kellogg Fairbank soon after graduation.

She published her first novel in 1910 and continued to write extensively, publishing ten more novels by 1936. She wrote mostly of local characters, many of whom were very strong women. She managed to highlight history and politics as well as the daily trials and tribulations of life into her work.

In addition to her writing she also worked very hard for the cause of women’s suffrage. She was a Democrat and served on the Illinois Democratic National Committee. Fairbank was also a delegate to the Democratic National Convention in 1932, and was on the board of the Chicago Lying- in Hospital for 24 years.

Lucile Wolf Heming Koshland was another unknown American suffragist. She was born on June 6, 1898, in New York City. She attended private schools and graduated Phi Beta Kappa in 1919 from Barnard College with a degree in American history. She married Charles Heming who was a stockbroker, and was widowed in 1929.

She raised four children on her own and became very active in civic and community organizations. In 1939 she was the first female Grand Juror. She served on the National Commission for UNESCO (United Nations Educational, Scientific and Cultural Organization), for two years and on the National Child Labor Committee for 20 years. She was the president of the New York State Chapter of the League of Women voters, and in later years a member of the League’s national board.

In 1947, following Carrie Chapman Catt’s death, a memorial fund was established in her honor to assist women in foreign countries the most effective use of their vote. Lucile was the first president and remained on the board through 1966. She was awarded the Commander’s Cross of the Order of Merit from the Federal Republic of Germany in recognition of the fund’s program of democratic education for German women.

Iron Jawed Angels, Women Leading the Way and Not for Ourselves Alone are all well done and highly recommended films if you want a closer look at suffrage.