A different look at a famous sharpshooter

Phoebe Ann Moses, or as you know her, Annie Oakley — do you really know her?

She was born into a Quaker family on Aug. 13, 1860, in Drake County, Ohio. Her father died of pneumonia when she was six years old. This left her mother with nine children to raise. When she was just eight she began to hunt with her father’s rifle to put food on the table. While her mother did her best, they lived in abject poverty. 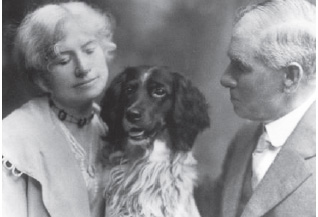 Phoebe Moses (Annie Oakley)
with her dog and husband.

Phoebe and one sister went to live at the Drake County Poorhouse in 1868. It was promised that if they worked for five years for the host family, she would receive an education. This did not happen. The two girls became slaves.

“All went well for a month. Then the work began to stack up. I got up at 4 in the morning, got breakfast, milked the Cows, fed the calves, the pigs, pump the water for the cow cattle, fed the chickens, weeded the garden, take to wild blackberries, got dinner after digging the potatoes for dinner and picking the vegetables – and then go hunting and trapping. Mother wrote for me to come home. But they wouldn’t let me go. I was held prisoner. They wrote all the letters to my mother, telling her I was happy and going to school.” — Autobiography of Annie Oakley

The girls were sadly mistreated. In the future she never used the names of her overlords, she only referred to them as “the wolves.” Finally, she was able to flee and took the train back to her farmhouse.

She encountered a kind gentleman on her way to the train. She looked a sight and when he enquired if she was all right, she told her story. He was aghast, and gave her the fare to escape her abusers. Eventually, when the wolves had been replaced, she did return to the poorhouse, where she learned a trade as seamstress and received an education.

She began to shoot game and sell it to support her family. Her business prospered and at the age of 15 she paid off the $4,300 mortgage on the Moses farmhouse. She engaged in shooting matches and quickly gained the reputation of sharpshooter. Her skill was unrivaled in her county and she began to take on competitors in other cities. In Cincinnati, a local hotel owner, Jacob Frost, set up a match between the 5-foot, 110-pound Phoebe and a 28-year-old shooter, Frank Butler, from Ireland.

The betting began and Frost bet $50 that Moses would win. Frank hit 24 out of 25 targets. Phoebe hit all 25, winning the match. Butler was intrigued with this pretty young woman in a pink gingham dress and sun bonnet. He gave her and her family free tickets to his next show. Phoebe became enamored, but not with Frank – with his French poodle, George. A conversation began between Frank and Phoebe and they did begin to court. Frank didn’t drink or gamble and treated Phoebe with respect and love. Her family approved. They married on Aug. 23, 1876, and began their shooting career together. Phoebe became Frank’s assistant and we presume George the poodle was there as well. The couple did not have any children.

On May 1, 1882, Butler gave a rather poor performance and a spectator shouted, “Let the girl shoot!” And shoot she did. She was reported to have been spectacular. In the following months Phoebe became increasingly popular. Surprisingly, in a remarkable reversal of the roles of the day, Frank stepped away from the limelight and assisted Phoebe. He was part of her act, holding up cards for her to shoot and managing the finances and paperwork. Together they broke barriers, raising awareness about poverty, disease and inequality while they entertained and excelled in their skill of sharpshooting.

Her career really took off when in 1885 the pair joined Buffalo Bill’s Wild West Show. Annie shot playing cards in the air and performed stunts on horseback.

The Wild West Show toured across Europe and performed for many leaders, including Queen Victoria, the kings of Italy and Senegal, the President of France and the emperors of Germany and Russia. She shot the ashes off Kaiser Wilhelm’s cigar and won the hearts of Europeans. She said about shooting the ashes off the Kaiser’s cigar, “If my aim had been poorer, I might have averted the Great War.”

Her career was long and successful. She always demonstrated not only great skill but amazing class. After retirement, Annie was involved in the National War Council, YMCA, War Camp Community Services, and the Red Cross.

On Nov. 3, 1926, the legendary daughter, wife, sharpshooter, philanthropist, and Ohioan known as Annie Oakley died in her home — ironically from pernicious anemia due to lead shot poisoning.

Margaret “Midge” Kirk is an artist, writer, bibliophile, feminist scholar and hobby historian in the southwest corner of Colorado. She can be reached at eurydice4@yahoo.com or visit her website, www. herstory-online.com.