A different view of history: Native speakers share their own perspectives on Columbus’ arrival

We had mountains
And you took down the trees
So that rain felled the mountains. . .

You took the plants
from our beautiful woods
on your ships
to lands already destroyed,
and even more of you arrived
to take our homes
while we still lived inside them.

— “What We Kept,” from A History of Kindness, poems by Linda Hogan, Torrey House Press

“So tractable, so peaceable are these people that I swear to your Majesties there is not in the world a better nation. They love their neighbors as themselves, and their discourse is ever sweet and gentle and accompanied with a smile; and though it is true that they are naked, yet their manners are decorous and praiseworthy.” 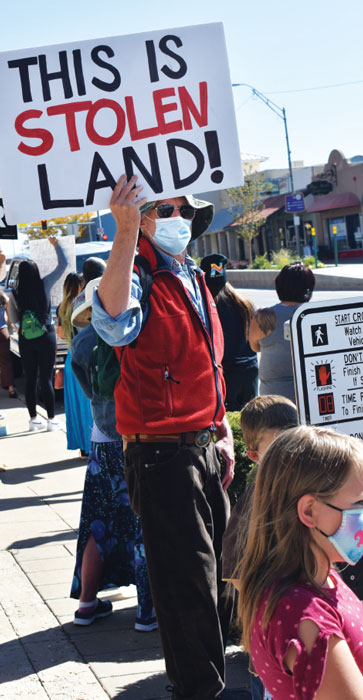 A participant in the weekly peace walk on Cortez’s Main Street. Photo by Gail Binkly.

That was a message penned by Christopher Columbus to King Ferdinand and Queen Isabella, describing the Native people he had encountered in Hispaniola on the first of his expeditions.

Despite his praise for the folks who greeted him in the New World, he did not treat them with the same kind and generous spirit they displayed.

He began capturing Natives for slaves, some of whom were hauled back to Europe, some forced to work for him and his men.

“In the slave trading by Columbus, the preference of capture was young girls, 11 to 13 years old,” said Duane “Chili” Yazzie, president of the Shiprock Chapter of the Navajo Nation, during a talk at the Cortez Cultural Center on Oct. 10.

A number of Native people spoke at the event, which was held in recognition of Indigenous Peoples Day, a corollary to the traditional Columbus Day.

In 2018, the Cortez City Council recognized Columbus Day as Indigenous Peoples Day, saying in a proclamation that the city wanted to “commemorate the survival and renewal of Native cultures.”

‘They call it history’

Yazzie spoke of atrocities committed under Columbus – which, according to numerous historical reports, included forcing Native men to search for gold and cutting off their hands if they did not find enough; burning people alive who tried to escape slavery; and raping women.

One of the Spanish men who worked for Columbus was so horrified by the appalling acts that he became a priest and devoted his life to trying to protect Native people, Yazzie said.

Columbus’s son followed in his footsteps, acting as “the purveyor of the black slave market” after most Native people near the coasts had been killed off, Yazzie said.

“Generations of peoples have been decimated, many tribal nations were decimated,” Yazzie said. “There were an estimated 10 million Natives at the time of Columbus’s arrival, but only 250,000 were left by the turn of the 20th century.”

Yet some Native peoples and tribes did survive, he noted.

“We are still here and we will remain true to who we are supposed to be, true to who the Creator made us to be. We shall prevail, even if only in spirit.”

Like Yazzie, Regina Lopez-Whiteskunk of the Ute Mountain Ute Tribe spoke of the cruelty and injustice perpetrated against Native Americans by European colonizers. “There were atrocities, but in the books they call it history and it’s written not by us,” she said. “It’s a story told by other people.”

She said celebrating Columbus Day is a difficult idea for indigenous people to accept. “The best way to celebrate that is not to celebrate,” she said.

Native Americans now make up only a minuscule percentage of the population in this country, Precious Collins of the Ute Mountain Ute Tribe told the group of onlookers at the Cultural Center.

“We are very small and we suffer from high rates of substance use and suicidal ideation and mental-health illnesses disproportionate to the rest of the United States,” she said.

The event took place in the plaza outside the Cultural Center. Members of a group known as the Montezuma County Patriots were invited to attend, and several did come in and watch the talks. A number of other people stood at the entrance or along the sidewalk outside, and some vehicles roared

by, periodically revving their motors, during the talks.

Lopez-Whiteskunk spoke against that behavior.

“If the Pope was standing here talking, I would expect me and everybody around me to listen, and that’s something that has degraded because of the division” in the community, she said. “Our own humanity has degraded to a level the grandparents would not be proud of.”

She said she felt respect for the people walking outside, including the older ones, who deserved admiration for the fact they “can still put one foot in front of another.”

But, she said, “What I didn’t appreciate was the noise when we had an elder up here. . . . It doesn’t matter what tribe or religion you are, you stand and you listen.”

Instead of focusing on petty divisions and disagreements, people need to recognize the connections between themselves and all things, Lopez-Whiteskunk said.

“There’s something bigger than your political views, your race and ethnicity. It’s called being human and giving people who are speaking, our elders, the respect to listen.”

Each day when the sun comes up, her people “not only pray for our families but for all humanity, all the spirits, all the beings, whether animals, plants, water, the elements,” Lopez-Whiteskunk said. “We include those in every one of our prayers. Never once do we see divisions or difference. Why? Because that’s not how our grandparents taught us.”

Collins also said she is disturbed by the separation and divisions she sees among people today.

“I don’t like it, it pains me,” she said. To indigenous people, it’s critical to recognize the connections between Mother Earth and all her inhabitants, she said.

“There are so many ceremonies that connect us to the ground. We use the sun, we use the stars. We use and we thank our brothers and sister that fly and walk and swim on this earth. Everything is connected and we have to remember that. As human beings we are all connected.”

She added, “At the end of the day when this election’s over, hopefully we all see that. If we can help others by just gently guiding them and telling our stories to them, maybe we can understand each other.”

Collins’s niece, Pachun Collins, who is Little Miss Ute Mountain, also spoke briefly, saying she would like people “to have hope in their lives.”

Sylvia Clahchischili of the Navajo Nation spoke about the Doctrine of Discovery, a legal concept upheld by the U.S. Supreme Court in 1823. The court’s decision said that European nations were entitled to sovereignty over any land they discovered and the indigenous peoples on that land had only the right of “occupancy.”

“The government declared our homeland had become theirs,” Clahchischili said. She praised the Episcopal Church for taking a stance against the doctrine and for supporting efforts for indigenous peoples “to have their inherent sovereignty and fundamental human rights respected.”

Art Neskahi of Southwest Intertribal Voice also spoke about that doctrine, saying that although the late Supreme Court Justice Ruth Bader Ginsburg is recognized for championing many causes, she wrote an opinion on behalf of the Supreme Court in 2005 that cited the Doctrine of Discovery.

According to Wikipedia, in City of Sherrill, NY, v. Oneida Nation. the court held that repurchase of traditional tribal lands centuries later did not restore tribal sovereignty to that land because of all the time that had gone by when the tribe did not have authority.

“Fee title [ownership] to the lands occupied by Indians when the colonists arrived became vested in the sovereign-first discovering European nation and later the original states and the United States,” Ginsburg wrote.

But Lopez-Whiteskunk said some things are changing for the better, and she is encouraged.

When she was asked to appear at a land acknowledgment in Durango – a traditional custom that involves acknowledging that the land was the homeland of indigenous peoples – she thought, “Wow, this is amazing we’re making some strides here,” she said. “People are finally understanding.”

But the land did not belong to Native Americans, she said. “We were stewards, we took care of it. Always give back, don’t just take and take and take…this land acknowledgment is a steppingstone for me and my people.”