Everyone knows the adage, “If at first you don’t succeed, try, try again.” But few people have taken it to heart more than Connie Gotsch.

Gotsch, of Farmington, N.M., knew as a child that she wanted to become a writer. But she didn’t realize how many setbacks, discouragements and obstacles she would have to face before she could make her dream come true. 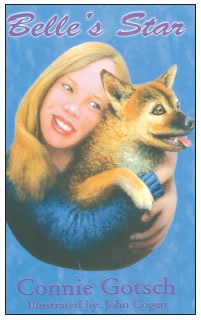 “It was a long time coming,” said Gotsch, whose most recent book, a children’s story called “Belle’s Star,” has garnered considerable praise. Gotsch also writes arts and entertainment articles for the Four Corners Free Press and other publications and is program director for KSJE Radio.

“I very much wanted to be a writer as a child. I wrote stories, mostly based on the stories I’d read. Girl has problems, goes to farm, finds a horse that has problems, and they heal each other. That sort of thing.

“My mother encouraged that kind of writing, but when I got to the point of writing about reality, she squashed that. She was very negative. And I didn’t have enough sense to not show her my stories.”

Gotsch persisted with her writing, attempting to join the staff of her highschool and college newspapers, but was rejected. She was shut out of creative- writing classes and critique groups. “They told me, ‘Your characters are trite’.”

In her 20s she wrote a novel and submitted it to a publisher she knew, “and she threw it at me, in front of people, at the church coffee. My mother told me, ‘I knew that’s what would happen.’ I just assumed that was what the publishing business did to you if they didn’t like your work. I didn’t know the reaction was extremely rude and excessive.”

But one of her professors told her, “Never mind, put it behind you and keep writing.”

She didn’t do that for a time, however. She gave up and, having obtained her bachelor’s, went to grad school and received her doctorate in communication. Later, while teaching at Eastern New Mexico University in Portales, N.M., she became friends with Patrick Rucker, head of the theater department, who advised her about the importance of body language, scenery and props in getting across an idea, even in writing. “It was like he let loose a tiger,” she said. “I will love Patrick till the day I die.”

Eventually Gotsch moved to Farmington to work full-time in public radio. There, she met other writers and began writing again. Eventually, she wrote a novel about university politics called “A Mouth Full of Shell,” which was published by DLSIJ Press in 2001. That was followed by “Snap Me a Future,” a print-on-demand novel about a former investigative reporter who uncovers looting at Anasazi sites.

“A Mouth Full of Shell” took first place for full-length novel in the 2001 New Mexico Press Women Communication Contest. “Snap Me a Future” garnered a second-place award in same category in the 2005 contest.

Both of those works were for adults. But then Gotsch met author Gwynne Spencer of Mancos, a friend to many writers, who died last November at the age of 63. Spencer loved animals. “If there was a sick animal in the universe, she would take it home,” Gotsch recalled.

In 1995, Spencer told Gotsch she’d stopped at a gas station “and there was some ugly, nasty man kicking a dog.” The dog, a small red-heeler mix, ran up to Spencer. The man, who was drunk, said he didn’t want the dog and offered it to Spencer for a dollar.

She took it home, whereupon (she told Gotsch) her husband told her, “You have dogs, cats, a son, me, a cage of finches, and a pot-bellied pig. You have to choose.” Gotsch paused. “She said she thought and thought, and finally she kept him. Of course, they were both laughing when they told me this story.”

The thrust was that Gotsch should adopt the dog, and she did. Kiri, who is now 16, became “Belle” of “Belle’s Star.” Kiri was a shy little thing when she came to Gotsch, and to this day she growls at tall men and flees if she smells liquor or hears Gotsch open a can of beer.

“Gwynne said one day, her story would make an ideal story for abused children. I started on it and eventually the novel came out.”

At Spencer’s suggestion, Gotsch wrote the novel in first person from the point of view of Belle, who describes the slow process of overcoming her fear of humans after suffering abuse at their hands. Belle is adopted by a 12- year-old girl, Darcy, and is encouraged to trust Darcy by other pets, including dogs and a cat. “I don’t think it would have occurred to me to write it that way without Gwynne’s suggestion,” Gotsch said, “but it became fun to do.”

To write it, she had to become more attuned to dogs — how they might think and feel.

Gotsch had two dogs at the time, Kiri and Ben, a “big black galumphus” who became “Buster” in the book. “I swear they have a communication system we don’t know about,” Gotsch said. “Ben [who has since died] loved to be outside in the yard. I’d go check on him regularly and say, ‘Ben, do you want to come in?’ He’d wag, wag, and go back to sleep. So I’d go away. Then Kiri would come to me all excited, wanting something. I’d say, ‘Where’s Ben?’ and I’d go to the door and in would come Ben. They must have been communicating on some other frequency.”

In the book, Gotsch was careful to incorporate smells as an integral part of Belle’s reaction to people, describing the spicy, peppery scent of fear and the foul stench of Toby and Bonehead, her former owners. “Dogs’ noses are phenomental,” Gotsch noted. “So I began describing people in terms of smell.”

Writing the book did not take long, Gotsch said, but then came “the agonizing business of trying to find a publisher. I got my share of cheesy form letters when you knew damn well they had never read it. Others said, ‘This is a beautifully written story, but not for us’. Still others said I should rewrite it from the girl’s point of view instead of the dog’s. I threw those in the trash.”

Finally, a friend told her to contact Artemisia, a small publisher in Albuquerque. Artemisia accepted her book and even asked if she had a sequel in mind.

Gotsch has also received numerous other awards, including the New Mexico Press Women’s Communicator of Achievement Award in 2007.

A sequel to “Belle” is in the editing process, and Gotsch is researching the next book in the series. “I have a sequel and a trequel and a quadrequel and I don’t know what we’ll have eventually,” she laughed.

Gotsch is not getting rich from her writing, but she’s content. “Am I a John Grisham? No. I probably never will be, unless somebody likes this enough to make a movie out of it.”

Gotsch is shopping around her third adult book, but “Belle” is consuming a lot of her time. Her veterinarian read the story and liked it, so she did a book-signing at his clinic. She’s hoping to do a signing in the Cortez area soon in conjunction with For Pets’ Sake Humane Society.

Meanwhile, award-winning journalist and retired Farmington elementaryschool counselor Margaret Cheasebro has designed an activities booklet for “Belle.” The booklet, designed to help elementary-school students understand and deal with abuse by talking about Belle’s experiences, is available in downloadable form upon purchase of the novel at apbooks.net.

Gotsch has never quite understood why her mother was so negative about her writing, but she is sorry her parents didn’t live to see her become a successful writer. Still, she’s pleased with the direction her life has taken.

“I think this will go on for a while,” she said. “I’ve found a niche for the moment.”