A local shines on the national literary stage

It’s nigh impossible to make it as an author of adult literary fiction. Yet that’s the goal Four Corners writer Mandy Mikulencak set for herself in 2009. 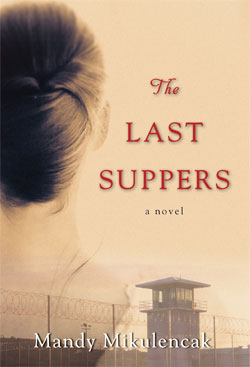 Mikulencak’s The Last Suppers, released in December, has earned the admiration of readers and reviewers across the country for its lyrical prose and character-driven depiction of the inequitable treatment of death-penalty prisoners.

Mikulencak, former executive director of the Women’s Resource Center in Durango, tells her tale through protagonist Ginny Polk, the cook at fictional Greenmount Prison in 1950s Louisiana. Ginny’s father worked as a guard at the prison until he was murdered when Ginny was a child. His best friend, Roscoe Simms, is now warden — and Ginny’s unlikely lover.

As warden, Roscoe grudgingly accepts Ginny’s passion for preparing a select final meal for each death-row inmate, until Ginny’s devotion to men seen as monsters by the rest of society threatens to upset the delicate balance Roscoe has achieved between supporting the rights of the mostly black inmates at Greenmount while, at the same time, condoning enough of the inhumane treatment of the prisoners in his charge, as demanded by Louisianans half a century ago, to keep his job.

Mikulencak says she did not set out to write an issues book. Rather, she initially was drawn to the death-penalty subject at the center of The Last Suppers when she happened upon the true story of a condemned inmate who requested Frosted Flakes cereal as his final meal. She wondered, she says, “what goes into such a request — the memories, the sense of loss.”

“There is a public fascination with last meals,” Mikulencak points out, noting the online proliferation of photos and art depicting death-row inmates’ last suppers. For her part, Mikulencak, a talented home chef, is fascinated by cookbooks. “I collect them and I read them like others would read a novel,” she says.

The recipes for the meals Ginny conjures, at great effort and emotional cost, for condemned prisoners in The Last Suppers are derived from old, southern cookbooks Mikulencak discovered in the course of her research, and are included in an addendum to the book.

But for all the devotion by Mikulencak to authentic recipes and to depicting the brutal reality of the death penalty, the story at the heart of The Last Suppers is that of the relationship between Ginny and Roscoe. That’s where Mikulencak’s talent as a writer, and her work over the last decade to develop that talent, truly shines. In Ginny and Roscoe, Mikulencak has created flawed, damaged characters whose entwined lives, and the racially charged mystery at the heart of their relationship, drive The Last Suppers to a conclusion as tragic as it is ultimately uplifting.

Scott Graham is the National Outdoor Book Award-winning author of the National Park Mystery Series for Torrey House Press. The fourth book in the series, Yosemite Fall, will be released in June. Visit Graham at scottfranklingraham.com.