A modest proposal for the Four Corners Monument

Don’t hold your breath just yet, but some improvements are in the works at the decrepit Four Corners Monument, which continues to be a popular tourist stop despite its primitive accommodations.

But the plans fall far short of what the project could have been – a $4 million landscaped oasis complete with an air-conditioned interpretive center that was originally conceived and funded more than a decade ago. 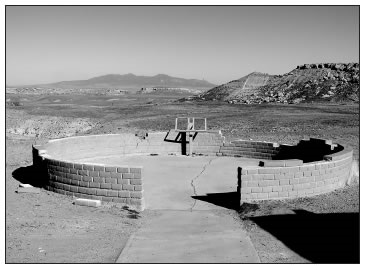 The Four Corners Monument shows signs of wear and tear, as this crumbling interpretive area demonstrates. Plans are under way for improvements, but they are far more modest than originally planned. Photo by David Grant Long

The monument marks the only spot in the country where four states touch, and it also marks a boundary between Navajo and Ute Mountain Ute tribal lands.

But now, thanks largely to the persistence of the Four Corners Heritage Council — in the person of chairman Cleal Bradford of Blanding, Utah — construction of what is now termed Phase One of the projects is under way at least and, according to the $680,000 contract awarded to Weeminuche Construction Authority last month, must be completed by fall. The work will consist of lowering the actual marker, a granite and bronze pie divided into quarters that face the states they anchor, eight feet below its current location and making other improvements to the surrounding plaza.

Entrance to the momument presently costs $3 per head, for which sum visitors get to pose and photograph one another with a limb in each of the four adjoining states — Colorado, Utah, New Mexico and Arizona.

Beyond this unique American oddity, however, the present amenities are sparse. The restrooms consist of portable toilets, and the loosely named visitors’ center is a rather barren room with a rack of sightseeing brochures and a space heater. Vendors at plywood stalls around the perimeter hawk jewelry, fry bread and other Native American wares. So twelve bucks for a family of four with two hot kids may seem a little steep.

Improvements have been long sought.

Bradford is an original member of the Heritage Council, which was appointed by the four states’ governors in 1991 to develop upgrades at the monument, along with other area projects it has since taken on. He has worked tirelessly to see the monument revamp implemented, but the road to fruition has been a bumpy one.

In 1999, Congress designated $2.2 million for improvements, with a provision that each of the states contribute up to $500,000 in matching funds. In other words, the feds would match whatever amount of money the states agreed to put in up to $2 million. Arizona kicked in its share largely in kind, drawing up detailed, comprehensive plans for the landscaping, interpretive center, real restrooms and much nicer stalls for the vendors.

The other states, with Colorado in the rear, finally ponied up their shares, and in 2004 a sort of groundbreaking was held at the monument with great fanfare.

Then nothing happened for five years except squabbling between the Navajo Nation and the Ute Mountain Ute Tribe, which jointly own the land on which the monument is located, with the Colorado quarter controlled by the Utes and the rest under Navajo (or Dine) rule. There were disagreements about whether the interpretive center and restrooms would be built on the Ute or Navajo land, and how the fees would be split — 50- 50 or 75-25. One member of the Heritage Council board called their differences as intractable as those between the Israelis and Palestinians. During that interlude, New Mexico took back its $500,000, Utah took back $200,000 and Colorado took back $300,000 that had been committed by the Department of Local Affairs, Bradford explained.

“That leaves us $1 million short of our local match, so we can’t use that half of the federal funds,” Bradford said. “That’s why we reduced the project down to what we’re calling Phase One, and we’re not using all the available funds on it.

“We lost a million dollars of the local match because of the delay, and hopefully that can be regained, but this isn’t the year to do it — everybody’s budget is being cut.”

The heritage council is only involved in getting the project built, Bradford stressed, not in the management of the site.

“That is not part of our participation — the Four Corners Heritage Council is assisting in the construction and getting it to where it’s an upgraded site,” he said, “but the management is something they (the tribes) have put into the future — I don’t even want to address that.” 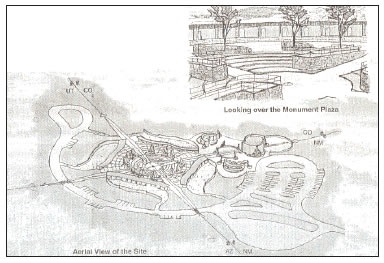 The original proposal for the monument, here shown as envisioned by an artist, has been scaled down considerably.

Still, Bradford is excited to see the project finally moving forward after the long delay.

“We don’t know exactly what it (the marker) is going to look like when we get it all torn apart,” Bradford said in a recent telephone interview, “but the idea is to preserve as much as possible (of) the granite and all those materials.” The relocation will facilitate picture- taking, he explained, since tourists will no longer have to climb to a deck area to shoot their friends, but can now take photos from ground level.

However, the much-hoped-for restrooms and running water will not be forthcoming in the near future.

“Initially, we had planned to have the ‘vendor village’ all around be part of the project and then have restrooms and the interpretive center,” Bradford said, “but because of the fact we don’t have power and water there yet, we don’t want to build the restrooms and just have them sit.” When power and water might be installed is unknown, he said.

“We still feel there would be more pressure on being able to get more matching funds (from the states) if we go ahead with the things that can be finished, and that would better serve the public. We wouldn’t want to build something just to stay vacant until other things happen.”

The monument will remain open druing the construction, Bradford noted, with access to the vendors but not to the intersection of the states, which will barricaded with chain-link fence.

The two tribes haven’t yet addressed certain issues, including revenue-sharing, according to program manager Martin Begay of the Navajo Nation’s park system, and probably won’t in the near future.

“We haven’t reached that point yet,” Begay said. “The only thing we have (at this point) is a memorandum of agreement for the construction.

“That issue — if it is an issue — will be covered by the finance plan that will be drawn up between the two tribes,” he said, and this will only happen “when the entire facility is built.”

And given the state of the economy, that may be a long time coming.