A shot in the arm: Native American tribes create their own plans for COVID-19 vaccinations 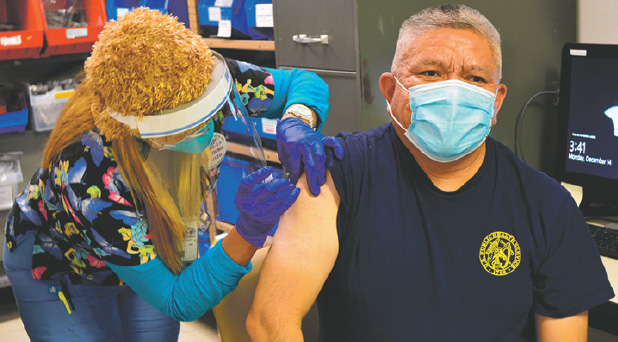 As sovereign nations, Native American tribes can decide whether they receive COVID- 19 vaccinations through the Indian Health Service, an arm of the U.S. Department of Health and Human Services, or through the state of Colorado.

The Ute Mountain Ute Tribe initially chose to receive its doses of COVID-19 vaccines from IHS. But the reservation entered Level Purple in December, the level of “extreme risk” in the state of Colorado. Tribal members living on the reservation are under a stay-at-home order, but COVID-19 case numbers are expected to rise as the result of holiday celebrations.

Chairman Manuel Heart told the Four Corners Free Press that if the Ute Mountain Ute Tribe works with IHS to get its vaccine doses, it will be one of 27 different tribal groups attempting to acquire limited doses of the vaccine through the agency.

“We are just a small tribe,” and tribes with a lower population are often “left last in a sense,” Heart said. U.S. Congress has long underfunded tribal health care, lessening confidence in IHS’s ability to deliver.

If the tribe works with the state of Colorado, it will be one of two federally recognized tribes in the state vying for vaccine doses. The Navajo Nation, one of the fastest growing tribes in the region with a population of over 173,000, has its own IHS area office and received just under 4,000 doses of the Pfizer vaccine from the initial delivery in mid- December – enough for half of its health care workers.

The Navajo Nation also has three hubs to store and distribute the ultra-cold Pfizer vaccine at the proper temperature of 2-8° C.

Should tribes be prioritized?

But Native Americans on reservations will not receive vaccine doses before members of the general public, despite the disproportionate impact of the virus on Native communities. “We are in there with the rest of the population,” Heart said.

A study by the Centers for Disease Control and Prevention released on Dec. 10 reveals that American Indians and Alaska Natives have died from COVID-19 at a rate almost double that of their white counterparts. And Indigenous people are more than four times as likely to be hospitalized from COVID-19, according to IHS.

At the end of December, there were 26 active cases of COVID-19 among Ute Mountain Ute tribal members in Towaoc, 30 tribal members in quarantine and four deaths caused by the virus. There are 2,118 enrolled members of the tribe, though not all of them live on the reservation or in Towaoc.

Comparatively, in Montezuma County, which has a population of approximately 26,000, according to the U.S. Census Bureau, there have been 10 deaths caused by COVID-19.

According to the CDC study, financial and transportation barriers may prevent Native communities from accessing timely care.

Before the vaccine rollout, the CDC’s Advisory Committee on Immunization Practices acknowledged that mitigating racial inequities should be a factor in distributing the vaccine.

CDC Director Robert Redfield underscored the need to prioritize older people in these households in a recent news release, saying “often our Hispanic, Black and Tribal Nations families care for their elderly in multigenerational households and they are also at significant risk.”

But reaching everyone who needs it will be an unprecedented feat for public health. The federal government designated an allocation of the first vaccines to reservations, but a century’s worth of broken treaties and failures to meet obligations with sovereign tribes has created skepticism about how quickly the tribes will receive them.

Heart said it was easier for the tribe to work with the state than with IHS to receive COVID-19 testing supplies earlier in the pandemic. Members of the Colorado National Guard came to the Ute Mountain Ute reservation to deliver supplies and help administer the nasal swab tests.

Colorado’s initial vaccination plan does not prioritize the Southern Ute Tribe or the Ute Mountain Ute Tribe. But the sovereignty of the tribes allows them to create a priority list that differs from the state’s.

Heart said the Ute Mountain Ute Tribe has not planned what Phase C, which includes most tribal members, will look like on the reservation, but front-line health care workers received the initial vaccine doses in December.

Tribal leaders picked up the initial 35 Pfizer doses from the IHS Albuquerque Area office on Dec. 15, but waited for FDA approval of the second Moderna vaccine, which doesn’t require ultra-cold storage, to start vaccinating other front-line workers. A spokesman for IHS said in an email statement that the Ute Mountain Ute Tribe was allocated 100 doses of the Moderna vaccine soon after it was approved, and the Navajo Nation was allocated 7,900 doses – enough to vaccinate all health care workers for both tribes.

The second round of vaccinations on the Ute Mountain Ute reservation this winter will go to other tribal employees, such as law enforcement and emergency medical service workers, following the state of Colorado’s lead in vaccination priorities.

Prioritization for additional groups hasn’t been finalized by the CDC or IHS, but a spokesman for IHS said in an email statement that it is expected to focus on essential workers, elders and those with high-risk medical conditions.

When the vaccine is available for tribal members in general, Heart said announcements will be made during the televised weekly broadcasts on internal Channel 99, on social media and flyers around the reservation.

Pamphlets with information about the vaccine will be handed out at the tribal checkpoints as members come and go during the lockdown, Heart said.

Tents with heaters will be set up on the reservation, so health care staff can administer the vaccine to tribal members in a warm but spacious environment that also limits further spread of the virus, Heart said.

IHS is working with health representatives from the tribe to provide transportation for tribal members to receive the vaccine at the tent locations, which the agency also provides for the flu shot.

Vaccine kits come with appointment reminder cards to hand out to patients, so they know when to return for their second dose. Without the second dose, the vaccine is ineffective.

On the Navajo Nation, tribal leaders will also use radio stations to provide COVID-19 vaccine information in both English and Diné.

The vaccine may negatively affect breathing for those with severe allergies, and Heart is encouraging those who are concerned to receive the vaccine at the health clinic instead of the drive-up sites the tribe is organizing. But until the vaccine is widely available, Heart is urging all tribal members to follow the stay-at-home guidelines and wear a mask. “Masks are what is going to save lives at this point,” he said.