Are disparities worsening?: Native Americans face existing problems obtaining health care, but pandemic-related measures may be making those even greater 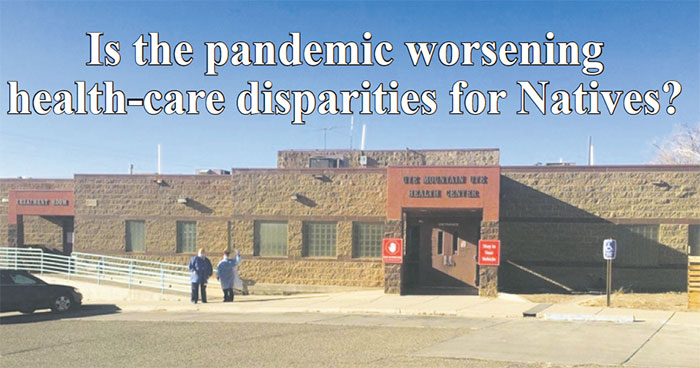 The Indian Health Service building in Towaoc, Colo., will undergo construction this spring that will increase its square footage and improve the facility. The clinic provides services to Ute Mountain Ute tribal members. But for other services, members may need to travel elsewhere, and restrictions under the coronavirus pandemic are causing increased difficulties for Utes who need care.

Former tribal council member and activist Regina Lopez-Whiteskunk lives with rheumatoid arthritis, a condition that affects her mobility if she does not consistently take medication.

Lopez-Whiteskunk meets with a medical specialist from Durango every other month at the Indian Health Service clinic on the Ute Mountain Ute Tribe’s reservation for an examination and a renewal of her prescription. But restrictions under the coronavirus pandemic, including reduced capacity for the clinic and a stay-at-home order for the tribe, have affected Whiteskunk’s medication regiment.

“It’s been difficult to deal with,” Lopez- Whiteskunk said.

Health care is guaranteed by treaty obligation for more than 560 tribes in perpetuity, in exchange for the millions of acres of land that make up the United States.

But health care for Native Americans is not free, Lopez-Whiteskunk said. She and other tribal members have to comply with additional layers of government bureaucracy in order to receive care.

The federal government funds the healthcare facilities on reservations, but the same level of care as at a doctor’s office or hospital in Cortez is not available, Whiteskunk said.

And health-care expenses outside the Indian health system are not necessarily covered by the federal government, so trips to private hospitals can generate large costs. Tribal members who get treatment outside the system have to petition for reimbursement from the Indian Health Service, which does not have the funding to cover all of the individual bills.

If Lopez-Whiteskunk wants to see an arthritis specialist, she said she is unsure if she needs to reach out directly to the specialist in Durango or go through the Indian Health Service, an arm of the U.S. Department of Health and Human Services, to ensure her care and medication is covered.

“We have to go beyond our own means,” she said.

Lopez-Whiteskunk has the medication she needs for the next few weeks, but her next appointment with the specialist won’t be until mid-January, when the doctor is serving the Ute Mountain Ute Tribe again.

“I will fall short on my medication in a few weeks, and we are coming into the coldest part of the winter,” she said.

Health clinic under construction this spring

The Ute Mountain Ute Tribe is moving forward with construction on the existing health clinic in the spring. A new health clinic building will pull the various services and facilities IHS provides under one roof. The tribe also plans to add a dialysis center, so tribal members with diabetes do not have to travel off the reservation for the treatment. Diabetes is a leading cause of both chronic kidney disease and kidney failure.

Chairman Manuel Heart is encouraging tribal members to use telemedicine and telehealth services during the construction period. But access to internet on the reservation is not widespread.

And conditions like rheumatoid arthritis require a doctor to physically see and feel what is affected, Lopez-Whiteskunk said.

Arthritis and diabetes are two of the largest health conditions that affect tribal members on the reservation. According to the IHS website, Native Americans and Alaska Natives continue to die at higher rates than other Americans in many categories, including diabetes.

Of the Ute Mountain Ute Tribe’s approximately 2,100 registered members, 30 to 40 are on dialysis, according to Heart.

Lopez-Whiteskunk also wonders how the elders are managing, and if they are getting the proper care and medication they need. Many elders do not have advanced technology skills, and may not have the ability to join a video call with doctors.

The coronavirus pandemic is especially difficult on smaller tribes and Native communities, because there are fewer resources and less funding from the federal government. Funding is provided yearly, based on the number of people in the tribe, and the last months of the year often see little grant funding left for the IHS clinic, especially during a global pandemic.

IHS has been chronically underfunded by the U.S. Congress, and the Ute Mountain Ute Tribe draws the funding for its health clinics from the IHS Albuquerque Area office, which also funds health care for tribes such as the Southern Ute Indian Tribe, 19 different Pueblo tribes and two Apache tribes.

Of the $193 million the Albuquerque office receives each year, the Ute Mountain Ute clinic receives $4.3 million. Marshall Cohen, spokesman for IHS, said the agency is expecting at least the same amount of funding for the 2021 fiscal year.

The health-care clinic in Towaoc has three doctors, and in-person visits are limited during the current pandemic.

“My personal opinion is that it is rather tough to try to construct [a dialysis center] when there is currently so much in place that needs work,” Lopez-Whiteskunk said.

Funding and energy should go into making sure all tribal members have adequate access to the internet and technology if telemedicine and telehealth will become pivotal forms of care in the future, she said.

Improved internet access would allow people to isolate at home while staying connected during the coronavirus pandemic, a virus that could “totally devastate small tribes,” Lopez-Whiteskunk added.

The tribe partnered with Verizon to purchase Wi-Fi hot spots at a low rate, and install larger routers in unoccupied houses south of Cortez. The routers are able to send Wi-Fi signals about 100 yards, and provide internet access for residences south of Towaoc.

Todd Giesen, project director for the Ute Mountain Ute Tribe’s behavioral health clinic, said widespread broadband infrastructure in Southwest Colorado has been problematic because of the cost and time involved.

“We’re not perfect, but we are also identifying successes,” he said.

Many Ute Mountain Ute tribal members are hesitant to go to Cortez for health care, even though there is not a full range of services on the reservation.

Speaking with a health-care worker at a facility in Cortez about insurance coverage can be “uncomfortable and intimidating,” Lopez-Whiteskunk said, because of the layers of complexity in how insurance coverage works for tribal members.

This experience is not unique to the Ute Mountain Ute Tribe. Reservations across the U.S. have experienced a history of health and health-care disparities.

According to the U.S. Census Bureau, the current total population of Native Americans in the U.S. is 6.79 million, or about 2.09 percent of the entire population.

“And that number is growing,” Heart said, but IHS is not funded enough to keep pace with the increase in population.

In 2017, the IHS spent $3,332 per patient, according to a report by the National Congress of American Indians. By comparison, Medicare spent $12,829 per patient and Medicaid spent $7,789 per patient in the same year.

A couple of months ago, her elderly mother went to the emergency room at a local hospital for treatment, and was not provided with a hospital gown or given an identification bracelet, she said.

“She was not given care with equality, but she’s covered by multiple layers of insurance,” Lopez- Whiteskunk said.

The former tribal council member said she has heard similar stories from other families on the reservation, and that is “scary when you are dealing with health.”

Giesen of the behavioral health clinic said health-care services from non-Native medical experts off the reservation is not culturally informed care, and may not be sensitive to the values and beliefs of Ute people.

These factors play into tribal members’ decision-making about whether to seek care off the reservation.

Lopez-Whiteskunk is hopeful that an administration under president-elect Joe Biden will change things for Native people. Her term on tribal council coincided with the final years of former President Barack Obama’s administration, and Lopez- Whiteskunk said she was “very honored and very impressed with the relations that Obama and Biden had with the tribes.”

Conversations about equality are just as likely under a Biden presidency, she said.

For Lopez-Whiteskunk, an important conversation moving forward is how to cement positive actions Biden’s administration takes for Natives so the next administration can’t undo them in the way President Donald Trump dismantled the Bears Ears National Monument in Utah created by Obama.

“We will always have the bureaucracy of the federal government,” Lopez- Whiteskunk said, “but I do have hope.”