Are progressives on the march?: Liberal-leaning groups in Montezuma County are feeling emboldened 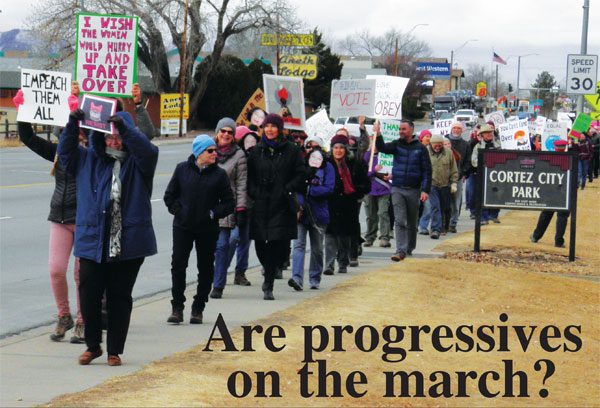 About 400 people turned out Jan. 21 in Cortez as part of a nationwide “Power to the Polls” event. Democrats in Montezuma County, encouraged by such turnouts, are setting their sights on the 2018 elections. Photo by Gail Binkly.

Normally the Democrats of Montezuma County open a temporary office about two months ahead of every presidential election.

But these are not normal times. So perhaps it isn’t surprising that on Feb. 1 of 2018 – a midterm election year – the Democrats were scheduled to launch an office at 215 E. Main St. near Wendy’s in downtown Cortez.

The office will be “anchored and signed for” by the Democrats, according to Alan Klein, co-chair (with Liz Bohm) of the Montezuma County Dems, but it will be intended as “the people’s office,” a home for progressive causes.

“We intend to keep the office through the 2020 election, where we will replace Donald Trump,” Klein said. 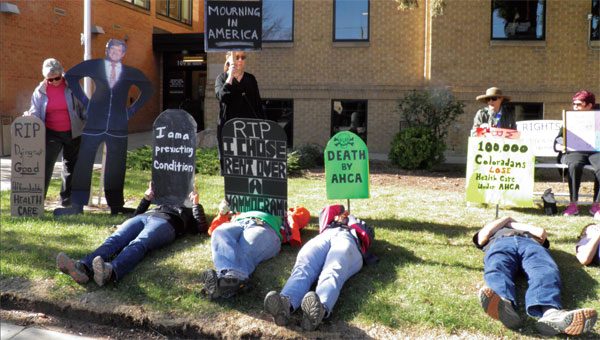 Klein is understandably biased, but he sees 2018 as an opportunity for Democrats to make great strides in local and regional elections, no matter what may occur on the national stage.

He points to the fact that there are Democrats running for seats on the town boards of all three of the county’s municipalities – Cortez, Mancos and Dolores – this spring. Although these races typically aren’t partisan in nature and candidates don’t identify themselves by party, Klein says it’s good to have people running who share progressive values.

“We worked hard to get progressives to run for the school board, too,” he said. “We’re trying to get people on the most local elected positions and even special districts.” 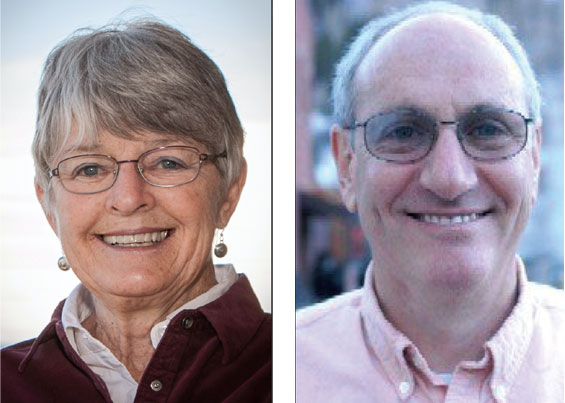 Democrat Mary Beth McAfee of Lewis is seeking the seat on the Montezuma County Commission currently held by Republican James Lambert, while Democrat Seth Cagin of Telluride is running for the Colorado House from the 58th District, a GOP stronghold.

In addition, a Democrat, Mary Beth McAfee of Lewis, is running for the county-commission seat currently held by Republican James Lambert (who also faces two challengers on his party’s side). In 2014, no Democrat was willing to go up against Lambert, who easily defeated an independent candidate, Bill Utrup, 62 to 38 percent.

And a Democrat, Seth Cagin of Telluride, is mounting an energetic campaign for the 58th District seat in the Colorado House. It had been held by Republican Don Coram of Montrose until he left to fill a vacant seat in the state Senate. Marc Catlin of Montrose was appointed to fill out Coram’s term.

Cagin is the first Democrat even to run for the 58th in three elections, but he says he is hopeful he can be part of a “blue tide” this fall. 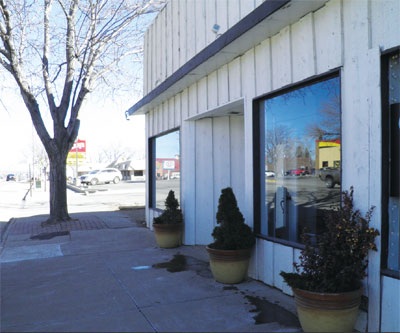 The Montezuma County Democrats are opening an office this month on Cortez’s Main Street. Normally they do not have an office other than in presidential election years. Photo by David Long.

Nevertheless, Montezuma County remains a conservative stronghold, a challenging place for the left to gain a toehold.

The county went for Trump by 30 percentage points, 61 to 31 percent, in 2016, even though the state as a whole went for Hillary Clinton. There hasn’t been a Democratic county commissioner since Kelly Wilson, elected in 1996 and 2000, and he was not a raging liberal by any means. Though two of the current commissioners, Larry Don Suckla and Keenan Ertel, were elected as independents, that isn’t because they are moderate in their views — rather, they found the mainstream GOP too centrist for their sentiments.

Likewise, the 58th District – which includes red counties Montrose, Montezuma and Dolores along with one blue-leaning county, San Miguel – has been considered “in the vault” for Republicans in recent years.

So candidacies such as McAfee’s and Cagin’s may seem quixotic, but Klein doesn’t see it that way.

“We’ve witnessed a lot more involvement in our community. We have more people active in the Montezuma County Democrats but also we are seeing individual groups like the Montezuma Alliance for Unity and Four Corners Indivisible in Mancos that didn’t exist a few years ago,” Klein said.

Klein said both of those groups, which are part of the grassroots progressive “Indivisible” network, a 501(c)4 nonprofit, are “springboards from the disappointment and outrage over our new president.”

Klein has been heartened by the turnout at a number of local events over the past year, beginning with the Women’s March the day after Trump’s inauguration. That drew 500 people out on a snowy morning in Cortez to join with millions of marchers worldwide.

Since then, there has also been a “diein” during which protesters lay down in front of the Montezuma County courthouse during a visit by Congressman Scott Tipton to protest his support for repealing the Affordable Care Act; a Women’s History rally and march in the month of March in Cortez; a climate rally in April; a “Celebration of Canyons of the Ancients National Monument” event at the WildEdge Brewery in Cortez; and last month’s repeat of the Women’s March and rally, this one with a theme of “Power to the Polls.” That happening brought out 400 of the faithful (a number confirmed by this reporter as well as others who counted the marchers as they walked by) to Cortez’s City Park on a chilly morning.

Local activists at the rally decried the fact that fewer than 20 percent of the county’s voters cast ballots in the last presidential primary compared to 24 percent statewide. They exhorted citizens to vote.

Cortez Mayor Karen Sheek told the crowd, “The way you can have the most immediate effect on your quality of life is by electing people to your local governments.” She said people also need to show up to meetings of city councils, school boards, and other bodies.

McAfee, wearing a T-shirt that read “Don’t Just March – Run,” said grassroots activism matters. “You can make a difference right here,” she said, while calling for civility and government transparency.

“I never thought I’d see in Cortez the great turnout at this year’s march and all those other events,” Klein said. “We’ve really had a good turnout of people who realized we can’t just give lip service to involvement any more.

“We’re seeing the kind of energy we didn’t see before. It’s gone to a whole other level. We never used to work hard to make sure we had candidates on the ballots for all the town boards.

“I hate to admit it, but we’re learning from the Tea Party, which has been able to effect change through grassroots action.”

He cited the example of the healthcare protest at the county courthouse. Citizens packed the commissioners’ meeting room during Representative Tipton’s meeting with the board, and many made comments, all of them civil. Then a number of protesters chanted, “Shame on you!” at Tipton outside the building as he was leaving.

“If Scott or [Senator] Cory Gardner shows up in the area, there’s going to be a few hundred people with signs, not just glad-handing Republicans saying, ‘Keep it up’,” Klein said.

He said he knows getting progressives elected locally will be an uphill battle. “The key is to motivate our voting base to turn out, as well as pulling in some moderate Republicans and independents.

“I cut my teeth on protesting in college to end the Vietnam War. We know how to do this. It’s interesting to see young people becoming aware that they need to take action.”

Klein said he is realistic about what may transpire. “It’s not going to happen overnight. It’s not a groundswell, but I’m seeing more energy than we have had in the past.

“We’re not where we want to be yet, but I’m optimistic.”