Are the Indian Wars starting up again?

The last “war” between the U.S. Cavalry and an American Indian tribe occurred near Nogales, Ariz., in 1917. The 10th Cavalry – the Buffalo Soldiers – clashed with a band of Yaquis.

It’s been nearly a century since there has been a traditional Indian war in the country. But could that be coming to an end?

President-elect Donald Trump’s campaign promise to build a wall across the southern border with Mexico will be opposed by at least one of Arizona’s Native American tribes.

“Over my dead body will a wall be built,” Tohono O’odham Vice Chairman Verlon Jose told the Washington Post recently. 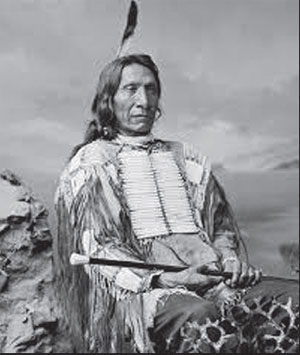 Chief Red Cloud, a leader of the Lakota Indians in the 1860s, defended his people’s land against the U.S. government.

The Tohono O’odham Nation consists of four non-contiguous pieces of land that include portions of Pinal, Pima and Maricopa counties. Traditional tribal lands also stretch into Mexico. However, the Mexican side is not part of the reservation and tribal members living south of the border are not included in Bureau of Indian Affairs membership rolls.

The 28,000-member tribe has one of the largest reservations in the U.S., roughly the size of Connecticut. The largest parcel consists of 2.7 million acres. The second-largest parcel, San Xavier, includes 71,095 acres just south of Tucson.

In all, the 2.8-million acre Tohono O’odham Reservation also shares 76 miles of border with Mexico. Many tribal members on the American side have relatives and friends living in Mexico.

Trump’s proposed 50-foot-high, nearly 1,000-foot-long wall would cut the Tohono O’odham Nation off from their many Mexican relatives.

Before Trump tries that, he’d better come talk to the tribe, Jose said. Otherwise he’ll end up with another Standing Rock situation, the vice chairman added.

A multitude of Native American tribes and their supporters are holding protests near the Standing Rock (Sioux) Reservation in North Dakota in an effort to stop a planned oil pipeline from threatening water quality and sacred lands.

Originally the pipeline was to come close to Bismarck, N.D., but the city fathers feared that a break in the pipeline would ruin their water supply. So they forced a re-routing of the DAPL.

But the new route could now ruin the tribe’s water supply if a break or rupture were to occur.

Tribal members from across the U.S. have flocked to Standing Rock to bring supplies and support. The ongoing protest has been countered with guard dogs, water hoses and tear gas.

Now, with tensions mounting in North Dakota, the Southwest is looming as another site for a potential battle over tribal sovereignty.

Tohono O’odham tribal members live on both sides of the border and cross back and forth using their tribal IDs. Vehicle barriers are set up to stop traffic, but the tribe has resisted the idea of a wall.

That area around the Tohono O’odham Reservation is located in what the Department of Homeland Security calls the “Tucson Sector,” a nearly 270- mile stretch considered a hotbed for illegal immigration and drug smuggling.

Other tribes – including some in Texas and California – may be in the same predicament, where their reservations border Mexico.

Although the Tohono O’odham tribe has opposed a wall, it has tried to work more closely with Homeland Security and immigration services to curb illegal activity.

But all has not gone smoothly, as many tribal members report being harassed by Homeland Security officers, Jose reportedly said.

Tribes are uneasy now, as Trump is generally seen as being hostile toward Native Americans’ treaty rights.

In the 1980s the billionaire sued to prevent the Mashantucket Pequot tribe from operating a casino, saying, “They don’t look like Indians to me.”

There are currently nearly 600 federally recognized tribes in the U.S., each with some type of treaty with the U.S. But what if the U.S. president decided to take action contrary to tribal wishes?

Treaties were made with tribes even before there was a United States. And they were generally broken by the non- Indian partner. When the U.S. wanted to do something, Indian treaties did not deter it.

In fact, the U.S. Supreme Court has determined that Native Americans are “domestic dependent wards” to the United States. And, while treaties promise tribal sovereignty – allowing tribes to govern themselves and make their own laws on reservations – the simple fact is that the federal government can – and has in the past – imposed its own will on tribes.

Maybe the most famous of Indian wars was in 1876, culminating in Custer’s Last Stand. But few actually know the reason for the war.

In 1868, the U.S. surrendered in what is known as Red Cloud’s War. (It is the only war that was won by the Indians.) In the Treaty of 1868 the U.S. ceded land to the Sioux – which included the tribe’s sacred Paha Sapa (Black Hills).

The treaty also said that no white man was allowed on the Sioux reservation without the tribe’s approval. Six years after the Sioux were promised this land for as long as the sun shone and the wind blew, rumors circulated that there was gold in the Black Hills.

The government sent Gen. George Armstrong Custer to explore the Black Hills – without the tribe’s approval. The flamboyant Custer reported “gold from the grassroots down.”

A gold rush was on, treaty be damned.

Instead of enforcing the 1868 treaty, the U.S. decided to buy the Black Hills. But the Sioux refused – because they believed the Black Hills was where their ancestors’ spirits dwelt.

The Congress decided it would pay $6 million for the Black Hills, a laughable sum considering that billions of dollars’ worth of gold and silver spewed from the Black Hills mining operations over the years. Many fortunes – including the Hearst family’s – arose from the U.S. decision to forcibly “buy” the Black Hills.

As recently as the late 1950s, the government suddenly decided to detribalize several tribes – including the Menominee – and threw thriving native communities into disarray. The Congressional action was later reversed.

So could the situations in Arizona and North Dakota lead to another Indian war? It may be time to circle the wagons.