The horse rears, tossing the sheriff over the cliff and down an incline. Tumbling and rolling, he lands on a ledge jutting high above boulder strewn white water.

Before he can recover his wits, a snarl penetrates his shaken mind. Two feet away, a mountain lion crouches on an outcropping, ready to spring — 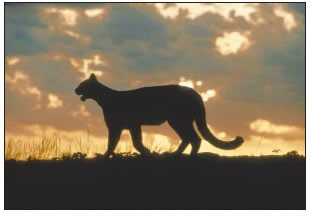 This photo by Durango’s Robert Winslow, “Lion at Sunset,” is one of the many art works on display at the Fort Lewis College Center of Southwest Studies as part of an exhibit called “Mountain Lion.”

Cut? Is this a movie?

Yup. A total movie. A real-life encounter with a mountain lion would be far different.

“In reality, [it] would run off,” chuckles Kevin Britz, director of the Center of Southwest Studies at Fort Lewis College in Durango. “Mountain lions are by nature very shy and elusive and tend to avoid humans. But that’s Hollywood, a kind of alternative reality.“

The very name “mountain lion” is a misnomer. These cats are not lions, but cousins of cheetahs and jaguars. Sixteenth Century English colonists in Maryland and Virginia heard stories but could not glimpse the evasive animals, and so confused them with lions.

Further, the colonists failed to realize that mountain lions lived from Canada to South America. When pioneers spread out and heard more big cat tales, they called the animals mountain lions, cougars, pumas and many other names.

Few settlers may not have seen mountain lions, but they surely heard them. Mountain lions utter sounds from growls to loud purrs. At 150 pounds for a male, mountain lions are the world’s largest purring cat.

Mountain lions are solitary and territorial until mating season. Then a female calls a gentleman by letting out a howl some people liken to a woman screaming.

“Those are the ones if you’re camping that’ll really send you into shivers, because it’s really blood-curdling,” says Britz.

Kittens stay with Mom about a year and a half, learning to hunt. Once they acquire the skill, Mama pushes them out of the nest, and the young ones must find their own place to roam.

People have interacted with mountain lions for 10,000 years. The cats preyed on early humans, just as sabertooth tigers and giant lions did.

“We have this visceral fear of big predators,” muses Britz. “That may go back to the time when people were eaten regularly by those things.”

Mystery surrounds mountain-lion paleontology, because mountain-lion ancestors lived in forests, and jungles, where fossils don’t easily form. However, scientists think that cougars descended from some ancestral cat, and appeared about 300,000 years ago.

Because of mountain lions’ adaptability, hunting skills, and intelligence, Native Americans revered them, depicting them in rock drawings.

Cougars eat any kind of meat, pouncing on elk, moose, and birds. One of the few animals that eats porcupines, they deftly remove the quills to find the flesh. Fish, snails, and road kill also make gourmet meals.

But of all the repasts a mountain lion can choose, he likes venison best. That creates trouble with modern humans. As deer come into urban areas, mountain lions follow, despite their shyness. Three mountain lions wandered onto the Fort Lewis campus last summer and animal-control officers recently killed one near an elementary school.

So if a cougar takes up residence in the woods next to a house, how’s the best way for the homeowner to be neighborly?

Also, keep the lid on the garbage can. Skunks and raccoons make tasty mountain-lion treats.

Should a mountain lion turn up on a hiking trail or in a back yard, screaming, yelling, arm-waving, stamping, flinging stones or dirt, hefting a mountain bike, any aggressive act will set the cat running.

The “Mountain Lion” exhibit uses artifacts and interactive components to make its point about these cats. A replica of the skull of a Panthera leo atrox, a prehistoric American lion found at the La Brea tar pits, as well as dioramas of sabertooth tigers and other large cats, depict the evolution of the mountain lion.

A Navajo story explains how humans gained hunting knowledge from cougars. A section on popular culture explores how people perceive them.

“We have a whole section of kitschy, wacky mountain-lion stuff,” says Britz. “Think about the Carolina Panthers, the Brigham Young Cougars, the Puma shoes you wear. Snagglepuss.”

The pop-culture component includes a reminder that mountain lions are not pink and cuddly like Snagglepuss, but wild.

Visitors can also see examples of mountain lions in fine art, courtesy of many of the Durango galleries.

“There’s something for everybody: kids, scholars, hikers, and the curious,” says Britz. “This is a family-oriented exhibit.”