Bison in the Grand Canyon?

A bison herd on the North Rim of the Grand Canyon has recovered from a beleaguered past, only to land in the middle of a hairy controversy about its future.

The shaggy creatures are the relics of an experiment, nearly a century ago, at the hands of a character named Charles “Buffalo” Jones. Desirous of a heartier beef cow, he tried to breed bison with domestic cattle to yield progeny he wanted to call “cattelo.” Those attempts failed. 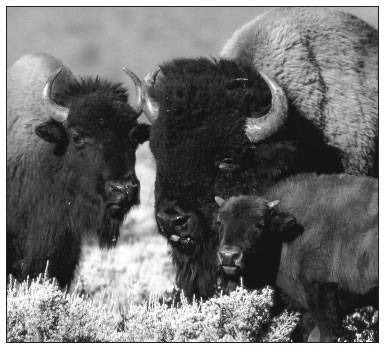 The state-owned House Rock bison herd, pictured here, has been making its way west into Grand Canyon National Park. For years the park has been unwilling host to the rapidly expanding herd, but finally, an inter-agency compromise is appearing more likely. Photo by George Andrejko / Arizona Game and Fish

By 1930 the 50-member herd had been sold to the state of Arizona and since the 1950s, the state has issued permits for hunts of the trophy animals. Until about 2000 there was no trouble. The herd stayed at House Rock Valley, just east and north of the Grand Canyon National Park’s North Rim, and hunters kept the herd at around 100 animals.

Then things changed. Possibly the extended drought initially drove the animals in search of cooler, greener pastures inside the park. Once there, they thrived. Humans seem to be their only threats.

“Mountain lions may be killing the young, but it’s not appearing that there’s much predation going on,” said Martha Hahn, Grand Canyon’s chief of natural resources.

In less than a decade, the herd’s numbers have roughly tripled.

But all is not well. Park officials have been complaining for several years that the gangly beasts are trampling park resources that deserve protection, including seeps, springs and the highaltitude meadows where the animals are foraging for grasses.

“They also in the winter hang out on the points [overlooking the canyon], because the snow gets melted off there, which is causing tremendous impact,” Hahn said. “We’ve found these tremendous wallowing areas in the meadows. These are grasslands that weren’t adapted to this kind of grazing.”

She said bison aren’t really competing for food with other herbivores. The park supports a large deer population, but those animals feed primarily on the tender lower leaves of deciduous trees rather than grasses. There are no elk on the North Rim.

But, besides their wallowing and trampling, park biologists worry that the bulky bison will compete with the deer at water sources, or even trample cultural sites. The park hasn’t done an inventory of prehistoric sites on the North Rim — which is worrisome in itself, Hahn said — but she’s concerned about the bison herd around the park’s historic cabins.

Park officials maintain that they have no responsibility to harbor the bison. The animals are hybrids, they say, because they retain still-traceable genes from Jones’ century-old experiments. And they say no evidence has ever been found showing bison were native to the area – although, to be fair to the bison, searches for native ancestors have not been comprehensive.

Park biologists still disparagingly use the term “cattelo” to describe the herd. Whatever you call them, the park wants them out.

For years park biologists have hit a wall, because the state hasn’t seen fit to help return the bison to the valley they used to call home. Finally, the agencies are talking, with the help of a Flagstaffbased scientist known for engineering far-reaching, cooperative solutions. But everyone involved with the issue is on a hard road – not least of all, potentially, the bison.

The House Rock herd is now spending most of its time on remote, forested points overlooking the grandeur of the Grand Canyon. The animals appear to be unaware of their partially domestic heritage. That is to say, they look and behave like pure bison; they seem wild. On multiple occasions, teams led by park biologists have tried to get close to the herd. They have always failed. Multiple-day tracking efforts resembling military missions have resulted in mere glimpses of the animals.

One such team went out in 2003 with James Derr, a geneticist from Texas A & M University. The goal was simple: tranquilize an animal or two, draw some blood, and test it for casttle genes. Each morning, the biologists got up before dawn to track bison. On the third day, by following hoofprints and other sign, one team got within 100 feet of a small group of bison. They tiptoed in silence like dedicated hunters, getting close enough to hear bulls snorting — only to watch the woolly beasts scatter through the trees like smoke when a veterinarian’s tranquilizer gun clicked against its case. Instead of blood, the genetic testing had to rely on tufts of fur the animals left behind – which turned out to be enough to reveal the presence of the tell-tale cattle genes, and confirm the animals’ mixed heritage.

A few years later, some of those same biologists went out on horseback to test the feasibility of herding the bison as a control measure, to keep them out of the park’s more sensitive areas. That effort went about as well as the first.

Meanwhile, the herd has continued to expand.

“They’re much easier to see and find, and they’re hanging out primarily in the park,” Hahn said. But that doesn’t help park officials who don’t know what to do when they catch up with them, especially since management responsibilities belong to the state.

Representatives from the Arizona Game and Fish Department have sometimes tagged along on the tracking efforts, but the agency’s official position has been clear.

“They’re free-roaming wildlife from the state of Arizona’s perspective and have been since 1926 or so, when the state acquired the herd,” said Ron Sieg, the Flagstaff-based regional supervisor for Arizona Game and Fish.

“Under our state laws we have to treat them as we would other wildlife in the state.”

Besides, free-roaming bison are worth big bucks to hunters. Arizona residents pay about $1,000 for the chance to shoot a bull. A non-resident tag goes for up to four times that much.

“That’s the highest-fee tag we have in the state,” Sieg said. “It’s a once-ina- lifetime harvest.” An elk tag, by comparison, costs about $100 for residents and $600 for out-of-state hunters.

Sieg said the House Rock herd is especially popular among trophy hunters because it’s one of the last free-roaming herds in the country. That means it’s one of the only herds from which trophy kills are eligible to be recognized by record-keeping groups such as the Boone and Crockett Club.

And whereas park biologists have been frustrated by the wild nature of the House Rock herd, that’s just what trophy hunters want, Sieg said.

“We say in our advertisements that this is one of the hardest hunts you’ll have in the state of Arizona, and that’s true,” he said. “Some of the hunters work very hard. They’ll rent snowmobiles … and work them for months.”

For years, the bison have seemed fated to thrive in the crosshairs of the stalemate. Hahn began working at the park three years ago, and found the issue stagnant.

“I could see there was a lot of fingerpointing going on,” she said.

Just recently, there’s a crack in the wall. Representatives from the state, the park and the Forest Service – which has remained quiet on the issue but sometimes hosts the bison on its land — have agreed to cooperate on a study of the issue.

Tom Sisk, at Northern Arizona University in Flagstaff, will head up the study. Sisk is an ecology professor at NAU, but he’s carved out a niche for himself that goes beyond science. He has a penchant for bringing research to bear on some of the toughest naturalresource issues facing the West – like ranching, and wildfire – and coming out with innovative policy solutions that involve multiple, formerly incompatible players.

“I think to some extent problems find us,” he said. And the House Rock Bison herd is right up his alley.

“There have been several runs on this issue,” he said. “People have tried various ways to deal with it, in a purely policy context, or a science context. This has defied resolution.”

Sisk’s involvement is in the early stages. He’s hired a graduate student, Evan Reimondo, to document impacts of the bison at seeps and springs on the North Rim – impacts that park biologists have seen for years, but haven’t quantified. And Reimondo will head to the park this winter to observe how the bison are using the habitat there, and decide whether other impacts should be studied in addition to the seeps and springs.

As a first-year master’s student, Reimondo is excited about his project. “I like the way the science is applied directly to a controversy, an ongoing management issue,” he said.

The science may be easy, next to the politics. Sisk must encourage three agencies with very different approaches to the bison – the Forest Service philosophy is closer to the state’s – to come toward some workable solution.

Any solution will require compromise. It would be difficult, for example, to open up Grand Canyon National Park to professional hunters who would cull the herd, but not impossible. It’s being done with elk at Rocky Mountain National Park.

Putting up some sort of bison barrier, like a fence, would be cumbersome and would likely interfere with the movements of other species, which is distasteful to all three agencies. But that’s been part of the discussion for years. In any case, the agencies are talking. And that’s a step forward.

Sisk is hopeful. “We’ve certainly got a very strong and visionary group of people engaged in it,” he said. “They seem to be pretty convinced we’ve got to figure it out.”