Bluff becomes a town — officially: The recent vote will mean changes, but most residents welcome them 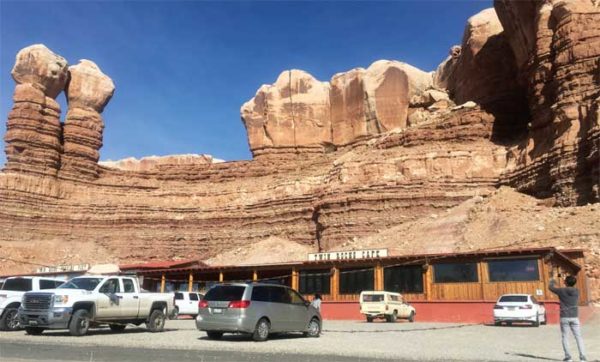 The rock formations behind Twin Rocks Café are one of the most iconic features of Bluff, Utah. On Nov. 7, residents of the tiny town voted to formally incorporate as a municipality. Photo by Janelli F. Miller.

The first thing you notice about Bluff, Utah, is the spectacular scenery. Nestled along the wide and lazy San Juan River between steep red-rock walls, Bluff is about as close to the heart of the Four Corners canyon country as you can get.

A trip to Bluff requires driving hours on empty two-lane highways through amazing rock formations and miles of open range. Then, when you least expect it, you arrive in a sweet and shady little town that feels like the Old West.

But change is coming to Bluff.

On Nov. 7, 2017, residents and property owners voted 89 to 32 to incorporate the tiny town, which has been a two-square-mile “service area” since 1978. This is the second time the town has tried to become an official municipality, and residents are hopeful the vote will bring about positive changes, allowing town decisions to be made by locals instead of from afar.

Bluff stands out from other towns in San Juan County due to the fact that it offers a supply stop for the nearby Navajo reservation, tourist attractions including galleries and historicl sites, and necessary services for the 300 (more or less) locals.

At 10 a.m. on a weekday at the Twin Rocks Café you can hear a smattering of English, Navajo, German, French, Dutch or Japanese. Across the street at the junction of highways 191 and 162 at the Cow Canyon Trading Post, you might find proprietor Liza Doran, who will happily show you her collection of blankets, pottery, jewelry, books and other Native American and Mayan art.

A resident of Bluff for 31years, Doran put a sign saying “YES” in the window of her car when she heard the election results. She’s been involved in business in Bluff for over 25 years, once owning a restaurant in addition to the gallery, and is excited about what incorporation might bring. “I’m proud of my community,” she says, explaining that she believes incorporation will be a positive step.

When Doran’s trading post is closed, tourists often wander around and snap a photo or two of the picturesque scenery, which includes a green 1940s sedan parked near sun-drenched adobe buildings and old cottonwood trees, set against the red canyon walls. Heading south towards the center of town, one finds the Old Fort historic site, with stone buildings under renovation, and the Bluff Visitor Center. Doug Jensen of Monticello (once the mayor there) now staffs the Visitor Center in his spare time, and mentions that he thinks incorporation will be “a challenge.”

“It’s a good step and I hope it works out for them,” he says.

In what might be considered “downtown” Bluff, you’ll find the defunct Dairy café and gas station across the street from fairgrounds advertising the Navajo fair in September. Add an elementary school, the K & C convenience store, several RV parks, a senior center, a couple of hotel and motels, and a few restaurants (several closed for the season or permanently), and next thing you know you’re on your way out of the twomile “service area” – headed towards Mexican Hat and Monument Valley in Arizona on Highway 163 or to Many Farms on the Navajo reservation down Highway 191.

But now the new boundary has extended the town’s control to a 38-square-mile area (approximately 24,000 acres) stretching from a southern boundary along the San Juan River to approximately 3 miles north. The incorporated area reaches from Comb Ridge to Recapture Canyon. It is intended to provide local residents more of a say on what happens in this area, including oil and gas drilling and the possible sales of school trust lands.

The enlargement of the area will definitely contribute to Bluff ’s becoming what is sometimes called an “outdoor museum.” The town website brags about Bluff ’s stunning landscape, which after the vote includes a number of sites popular with tourists, including Comb Ridge’s unusual topography or the BLM-administered Sand Island Recreation site, which has a popular petroglyph panel, boat launch and campground.

Will incorporation change this small town? Most residents don’t think so, as evidenced by the overwhelming vote in favor of incorporation. Nathan Sosa, a lifelong resident of Bluff who works at the post office, thinks it will be good for Bluff, but “we’ll have some growing pains.” He’s referring to recent development in town, which includes two new motels providing an additional 60 rooms. But, Sosa says, incorporation will provide “local accountability” and overall is positive.

The area that is now Bluff was first settled by Ancestral Puebloans, as noted on a town sign reading, “Est. 650 AD.” It was home to nomadic indigenous peoples, including the Ute, Paiute and Navajo, who travelled through, stopping to hunt and gather, pasture sheep and farm the fertile river bottomlands.

White settlers passed through beginning in the 1700s, and in 1880, Bluff City was founded by the Mormon Hole in the Rock expedition, becoming the first Anglo settlement in the area. By 1878 settlers lived year-round in Bluff. They tried to support themselves by farming, but this proved tricky, and many moved 25 miles north to Blanding.

The handful of hardy folks who remained tried ranching and mining in addition to farming, all of which were subject to the vagaries of weather and international economics. Bluff was no stranger to the “boom and bust” cycles common to many small towns in the rural West.

Yet as time progressed and the Old West became an increasing focus of Hollywood films and the popular imagination, citizens of Bluff added catering to visitors to their local economy. By the 1960s Bluff was a destination for out-oftowners seeking a taste of the frontier or a glimpse of John Wayne. The desert scenery was made famous by John Ford Westerns starring Wayne, filmed in nearby Monument Valley – including Stagecoach, The Searchers and How the West was Won. As a border town, Bluff provided lodging and meals for visitors.

The increase in population due to growing tourism and recreation led a group of 130 local Bluff residents to successfully petition the San Juan County commissioners to incorporate the City of Bluff in 1976. However, Bluff City was short-lived, and in 1978 residents voted to discorporate.

Bluff then became a service area overseen by a board of trustees who did not always live in the town. Unincorporated areas in Utah are governed by the county, and Bluff had two groups, often at odds, working to control local decisions: the Service Area committee and Bluff Water Works.

The recent incorporation effort was mounted by a group of 60. This year, Bluff ’s Incorporation Committee, co-chaired by Linda Sosa and Brant Murray, requested a feasibility survey, a necessary step under Utah law. Bonneville Research was hired to assess the economic feasibility of becoming a self-sustaining town. The study was to see whether the town could provide necessary services – law enforcement, fire control, road maintenance, administration, park upkeep and so on.

On Aug. 8, Bob Springmeyer of Bonneville presented residents with the results, which found that incorporation was economically feasible.

Next was the Nov. 7 vote. Now will come an official public hearing Tuesday, Dec. 12, at 7 p.m. at the Bluff Community Center. The hearing will provide citizens with information about the legal repercussions of incorporation.

All incorporated towns in Utah must have a council, including a mayor, elected in a general election. Bluff ’s election is expected to take place in June 2018. The council will be responsible for making decisions about what services the town will provide.

According to Utah statutes, an incorporated town has the power to appropriate taxes, and has a say over how transportation, land use and development (planning and zoning), utilities (including water), buildings (design codes), trees, playgrounds, parks, airports, streets, sewers, lighting, garbage, litter, and so on will be managed. Details such as how streets will be numbered or named, what sales (of food, meat, intoxicating or controlled substances, etc.) may or may not be allowed, or what to do with beggars, prostitutes, vagrants and knives are all spelled out under Utah law.

The San Juan Record (Aug. 16, Zak Podmore) reported that San Juan County Administrator Kelly Pehrson suggested that there could be an option for Bluff ’s volunteer EMT and fire department to provide services beyond the incorporated area, in exchange for (yet to be determined) county services, and law enforcement could be contracted out. At this point, details of what will be regulated by the town and how much it will cost are still unknown.

One concern raised by residents before incorporation was water rights. The Bluff.inc website explains that “Incorporation constitutionally guarantees Bluff protection from transfer of water rights and forever secures adequate water supplies for the town of Bluff,” which may have been a reason some residents voted for it.

Several residents told the Free Press they are happy that San Juan County’s oldest settlement will now be officially a town. Some felt it wouldn’t make much difference in their daily lives. Others were pleased that town residents would be more in control of what happens in and around their homes.

Local accountability was a common theme – a sentiment expressed by Jim Hook, Bluff resident of 29 years and owner and operator of Recapture Lodge. “We have a place at the table now,” he notes.

Hook says Bluff is unique, and regional politicians do not really serve its best interests. “Our county commissioners are from Monticello, Blanding and the Navajo area – we’re not that. We’re not Moab, Aspen or Park City,” he says.

Sosa says what he likes about Bluff is “it’s a good mix of people and cultures. We have a diverse mix of both political views and cultural views. We’re kind of like the melting pot of San Juan County.”

This diversity was part of the impetus for incorporation. Locals wanted to have more control over what happens in their corner of the state, because they feel they are not like the rest of Utah. (Where else do you find a community coming together to burn giant effigies of paleo animals on the winter solstice?)

Doran says incorporation will “give Bluff a voice in its destiny.”

Now, “Bluff represents its own self, therefore it is able to make decisions independently,” he said.

Sosa agrees that “it will be good that we have local control and that we get to spend 100 percent of our property taxes here.”

But residents and members of the incorporation committee will have to decide exactly what they want their town to become. Will they keep the sleepy Old West, “outdoor museum” feel? Will they allow more hotels, restaurants, or festivals? What about mining and energy productions? How much say will residents of the nearby Navajo communities, who use Bluff services and work at some of the businesses, have?

Doran says, “It’s already been a lot of work, and I’m thankful for the people who have worked so hard to bring it to a vote. I hope that everybody can get on board and have the common good in their hearts and minds.”