Catching air: The first Dolores Cyclocross is a hit

Nearly 50 cyclists made the trek to ride in the first-ever Dolores Cyclocross Race, held in the town’s Joe Rowell Park on Oct. 18 and 19. 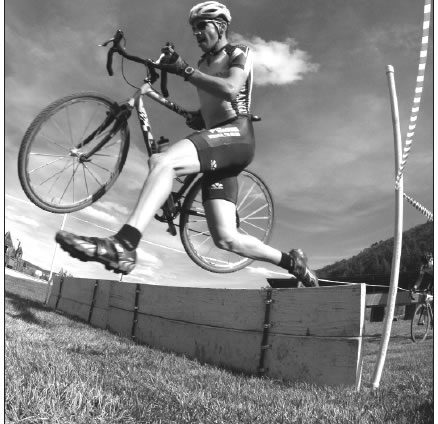 Cyclocross is a discipline of bicycle racing that consists of many short laps where riders compete over varied terrain that includes obstacles requiring a rider to dismount.

The course had racers winding between baseball fields on grass and gravel, running up the embankment onto a levy, and carrying bikes over four obstacles.

Prior to the first race on Saturday, a clinic was offered to introduce riders to the skills needed to negotiate the typical challenges of a cyclocross course.

Travis Brown, a Mountain Bike Hall of Fame inductee, led 11 participants through the clinic that included how to gracefully dismount a bike, run and jump over an obstacle, and then remount the bike in what appeared to be one quick motion.

The mounting and dismounting of bikes makes cyclocross exciting to watch, and the races attracted many curious locals.

“It is a dynamic style of racing with lots of lead changes,” said Brown.

The Dolores Cyclocross Races had recreational competitors ranging in age from teens to those in their 60s trying the sport out, and many professional cyclists attended the race as well.

“Often it was a way to get on the dirt roads at the end of the road season and see some new routes, but racing cyclocross is a way to maintain fitness without having to hold to a strict training plan.”

Because of the semi-technical courses and a short, intense effort in the race, usually 30 to 60 minutes, cyclocross racing has crossover appeal to both mountain-bikers and road cyclists.

Brown, who won two world championships in single- speed racing and multiple national championships in various mountain-biking disciplines, thinks cyclocross has benefits for all types of cyclists. “Cross can benefit road or mountain-bikers because it teaches your body how to handle sustained peak efforts of power.”

Engleman thinks cyclocross is a good fit for the area. “I really see a cyclocross event being big in Dolores and it just seems to fit the outdoor nature of the community.”

After the clinic, Brown said he was impressed with the cooperation between the town and event promoters to come up with what he thought was a fantastic venue for cyclocross racing. “It has become more difficult to promote both road and mountainbike races because of access issues.”

According to Brown, many communities are cool to the idea of using park systems for non-traditional sporting events.

But when approached by Ciclistas del Rio President Lance Webster, the town of Dolores was open to the idea of a cyclocross race in Joe Rowell Park.

“The town is always looking for events that will bring people into town,” said Ronda Lancaster, Dolores town administrator. “It is always a plus for the town to have well-run events that can become annual events.”