Caucuses: A great way to have sway

Although Colorado is considered a key swing state in the 2016 presidential race by candidates of both major parties, Colorado Republicans are taking some wind out of the state’s sails by not showing their hand until late in the campaign game next spring.

Reacting to a 2014 Republican National Committee change in bylaws, the executive committee of the Colorado Republican Party has cancelled the presidential straw polls at the 2016 caucuses.

Previously, the Colorado Republicans held an election-year precinct caucus in which registered party members held a presidential straw poll – a show of hands – to decide which of the candidates campaigning for the presidential nomination within their own party was preferred by party members.

Delegates representing the precinct were also selected at that time. The delegates were expected to support the candidate that won the presidential preference poll when they attended party assemblies at the county, district and state levels and ultimately the national party convention where a candidate was selected to run for president. The process did not “bind” the delegate to support the candidate selected at the precinct level, or any step along the way.

It was the same approach in both parties.

But then the Republican National Committee changed its bylaws saying that the delegates are now “bound” to their preferred candidate beginning with the presidential preference poll taken at the precinct caucuses.

As a result, no vote for Republican presidential nominations will be taken at the precinct caucus.

According to Ryan Lynch, chairman of the Colorado Republican party, “the National Republican Committee essentially decided that today there is no such thing as an informal presidential straw poll. If your precinct caucus takes a presidential poll and elects national delegates, then those delegates are bound to the candidates that won in the poll.”

The Colorado Republican executive committee felt that the delegates elected in the March caucuses and the candidate they would be bound to – especially with such a large field of candidates – might not be relevant in July at the national convention.

“Of course, some say that a candidate could release the delegates if he/she dropped out, but what if they don’t?” Ryan explained in a telephone interview with the Free Press.

“So the Colorado party decided to do away with precinct presidential preference polls entirely this year because there are so many different candidates and what is applicable in March may not be so in July.”

Although the campaigns will not be spending money on the same advertising campaign strategy they would prior to this decision, the unbound Colorado delegates themselves become a hot commodity at the national convention in July.

The Republican precinct caucuses will be held on March 1, 2016, as scheduled, “but it will look more like the 2014 caucus than the 2012,” explained Lynch. “We’ll begin electing precinct captains and committee people and delegates that will then move on to the county assemblies a few weeks later and from there through the district to the state and the national convention. We hope people will register to participate in the caucus if they haven’t already done so.”

Not so for the Montezuma County Democrats. They have been busily engaged since early last summer urging voters to register with a party, while explaining the advantages of participating in a caucus process, hopefully theirs, which will be held Tuesday, March 1, 2016. 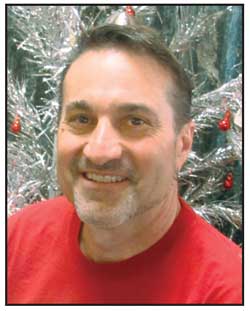 Ric Pleše, co-chair of the Montezuma County Democratic Party, urges citizens to take time during the holiday season to register their party affiliation with the county clerk’s office, or online at the Colorado Secretary of State website. Registration is required before Dec. 31 in order to participate in the Colorado presidential precinct caucuses, scheduled for March 1, 2016. Photo by Sonja Horoshko

Ric Pleše, Montezuma County Democratic co-chair, told the Free Press that the local interest in the Democratic precinct caucus is “pretty energized. I suspect it will be a big turnout because it’s a major contest again.”

Montezuma County is divided into 11 precincts for the Democrats. Eight will be convening in the County Annex building, while the other three will meet in Dolores, Mancos and Towaoc.

People can check with the Montezuma County Clerk, or local party headquarters to find their precinct caucus and location.

“At our larger caucus in the annex building the cluster of eight precincts will meet in separate areas,” Pleše said. “I’ll take an initial straw poll from each precinct – a show of hands — and then people can speak on behalf of a candidate, usually to persuade people to change their vote. At the end of the speeches I call for another vote and then a final vote of all the precincts.”

People should commit to staying for the whole caucus, he said. “It can be lengthy, an hour and half to two hours or more, but it can also be fun.”

A lot of work

Only 15 states still use the many-level caucus system, one of the older forms of polling voter preferences. Participating in precinct caucuses is the first and most powerful step individual Montezuma County voters can take to influence the nominations.

Pleše describes the process in increasing increments of population and land base. “The date for the county (get together) is not set yet, but will follow the precinct caucus no later than 25 days after,” he says, “and we’ll post it on our website.” The Congressional Districts Assembly/Convention then meets between April 1 and 15 and the State Assembly/ Convention convenes Saturday, April 16.

“It is a lot of work to organize the caucuses. This year the precinct committee people are really motivating people to get there. It’s been a big contribution to voter turn-out.”

Ann Brown has worked in local politics for over 35 years. “There was a time, even not too long ago, when Montezuma County was a Democratic stronghold,” she said. “My granddad, a Democrat, was Montezuma County treasurer and I’ve been past committee person and worked door to door campaigns as far back as 1959 for JFK.”

Pleše said Brown’s knowledge of political operations and strategy is formidable. “She’s a great resource for understanding why the caucus is such an integral part of the democratic process.”

The precinct caucus is the first step in a multi-step system, explained Brown. “We sometimes met in people’s homes like a neighborhood get-together. We always had a lot to talk about.”

It’s a very powerful step to take, she said. “Imagine if we held primaries, which essentially tally up the votes at the end of election day, instead of a caucus which commits delegates to candidates at a grassroots level. How many urban voters would turn out vs. rural voters? Urban interests will dominate by sheer numbers. In some states the result is winner-takes-all [delegates] as in California. Smaller states and rural areas have little influence on the party nominations if the primary system is used. There’s simply more people in an urban area.”

Arizona and New Mexico use a closed primary system, meaning citizens wishing to vote in a presidential primary may only cast their ballot in the primary of their registered party. The Arizona Republican and Democratic primary is also scheduled for Tuesday, March 22. In New Mexico both parties will hold the presidential and state/local primary on Tuesday, June 7.

Colorado Democratic and Republican legislators failed in their attempt earlier this year to draft a measure that would create a primary system in Colorado. It would have put Colorado in the limelight during the presidential campaigns, they claimed, by allowing the states’ nearly 40 percent unaffiliated voters to vote in either a Democratic or Republican primary to chose the candidates nominated by those parties without changing their party registration.

The argument that some people made to change the Colorado election process from a caucus system to a primary focused on increasing voter participation, predicting that the numbers of voters would swell while the reorganization offered Colorado a chance to move the calendar dates for state presidential nominations forward in the year, closer to the Iowa precinct caucuses and New Hampshire primaries.

But according to a recent Denver Post blog, when the efforts to change to the primary system were emerging in 2013, then state Sen. Ted Harvey, R-Highlands Ranch, said letting voters who aren’t Republicans determine the outcome of a GOP primary is like letting a ‘non-Catholic pick the pope.’”

If you are already a registered with a party and have lived in a Montezuma County precinct for more than 30 days you are good to go. But if you are unaffiliated and want to register to participate in a caucus, it must be done at least two months before the caucus. That deadline will fall on the New Year holiday.

Molly Cooper, a Democratic precinct captain in Dolores, and House District coordinator, said she is stressing that registration must be done before Dec. 31. “You can go to the Colorado Secretary of State on-line registration or govotecolorado.com. It’s very easy, but it takes the system a little time to get the paperwork back to the county clerk here and then send you a notification, about 20 days. We are urging people to do it now.”

When the completed on-line registration is submitted to the Montezuma County Clerk and Recorder it is processed and entered into the books and an official information card is sent to the registrant.

“This is my first time getting involved on a caucus level,” said Cooper, who is campaigning for Bernie Sanders. “This is the place that your vote is most powerful. As an example, if your precinct has 300 registered Democrats and only thirty of you show up at the caucus, your vote is amplified by ten. That’s why we hope people show up, why we are urging people to register before Dec. 31.”

The other deadline both she and Pleše stress is start-time. “Our precinct caucuses start at 7 p.m. If you aren’t in the room with your ID in hand – Colorado driver’s license or identification card – and checked in by that time you cannot participate. That’s the regulation and we stick to it,” he explains. “Show up well before 7.”

Paperwork issues and registration details cause delays at the door. “Sometimes we can’t find a person’s name, or they didn’t register in time and they’re not on the list. We are exacting with everyone and that can back up the process. We also want to direct people to the correct precinct locations if they have come to the wrong one.”

What’s really cool about working on a campaign at this level, adds Cooper, is that it teaches you about hands-on democracy. “You really build passion about the election and the candidates when you invest in this kind of local grassroots effort. You get to see it, live it.”