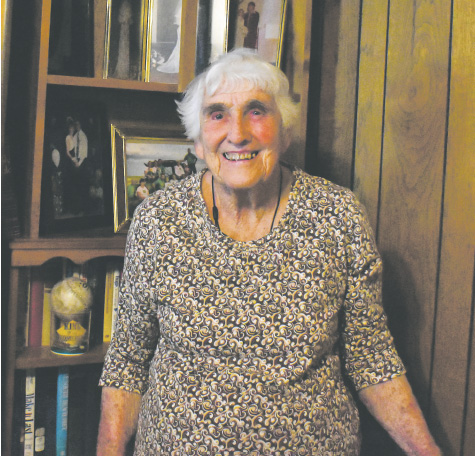 Bessie White at her home in Montezuma County. Photo by Erika Alvero

When Bessie White was 4 years old, she and her family moved from the harsh Canadian landscape of Vermillion, Alberta, to another beautiful yet unforgiving terrain: Ackman, Colo. Situated on the Great Sage Plain in Southwest Colorado, just south of Pleasant View, Ackman was a place where water was miles away and farmers were completely dependent on Mother Nature for precipitation. It was a place where neighbors relied on one another for survival.

“It was the way that the communities worked,” White told the Four Corners Free Press. Spry and brimming with stories, she celebrated her 90th birthday last year.

White still lives on the dry plains where she grew up, a fixture in the communities of Dolores and Montezuma counties. The farmers market she and her sister Velma founded four decades ago is thriving and a recent virtual talk she gave through the Cortez Public Library drew a crowd, gathered to hear her speak about Bessie’s Sylvan, a book she co-wrote with her neighbors John and Sharon Wolf.

“Bessie didn’t want to focus on her family — or herself…she wanted to record how special her home, Sylvan, was,” John Wolf told the Free Press in an email. Sylvan was another community near Ackman that would later become White’s home.

Her story elucidates the past, present and future of dryland farming in this area, how it helped forge a strong community, and how it’s adapting to a changing world.

Coming to the Southwest

When White first arrived in Colorado, she was Bessie Hollen, one of five children at the time. They chose Ackman as a destination because Bob Hollen’s parents — who had previously moved to Vermillion from Kansas to escape the Dust Bowl — had made the trek two years earlier.

In their book, White’s co-author John Wolf describes the Great Sage Plain as dry and “windy enough that you’ll have to chase your hat quite a distance if not firmly secured.”

To be considered dryland agriculture, farmers must grow without irrigation on a plot that receives less than 19 inches and where the “potential amount of moisture evaporated from the ground is more than the moisture gained through rainfall,” according to Wolf in the book’s introduction. The practice is not new in Southwest Colorado; the Ancestral Puebloans were dryland farmers for hundreds of years before Anglo- European settlers arrived.

Standard dryland crops include winter wheat, beans, and alfalfa — plants able to grow using residual moisture in the soil rather than depending solely on heavy rainfall.

“The cycle of the season, the climate, when the rain stops and all that, makes wheat and beans a good crop for the area,” said Abdel Berrada, a local agricultural scientist and former director of the CSU Southwestern Colorado Research Center in Yellow Jacket.

Seasonal planting time is crucial: plant the winter wheat in mid-September or October in advance of the snow, plant beans in mid- May or early June before monsoon rains hit later in the summer, Berrada said. Good dryland farming requires careful stewardship of the land and soil, in addition to attention to weather.

For their first few years in Ackman, White’s family grew pinto beans and winter wheat primarily. She recalls the hard, all-encompassing work of her early years.

“My mom and I, one summer we milked 10 cows twice a day,” she said. “And they’d take it in — they had a strainer — they strained it, and then separated it with a hand separator. And that’s what they bought their groceries with, the cream.”

Her mother, Marie, was constantly cooking, sewing, canning, and finding other resourceful ways to provide for the family, a necessity for a dryland farmer to keep going even in difficult drought years.

“It was just what worked,” White said. “People didn’t have a lot of ready cash, that’s all there was to it. Some people who worked for wages did, but the biggest share of the community was farm people.”

The small communities dotting the plains were spaced out by about three miles — the distance a small child could be reasonably expected to walk to school, White said at her library talk. By the late 1930s, Ackman had disappeared: U.S. Highway 666 (now U.S. Hwy. 491) was built and missed White’s hometown by just a few miles, leading business owners to pack up and migrate toward the new road. The Ackman post office hung around for another few years before eventually giving up.

For a time during World War II, her family lived at Summit Ridge, with White’s older brother Howard taking over operations of the Pleasant View farm. White opted to attend Dolores High School and moved to Dolores, working for room and board with a family there, as the distance would have been too great to travel every day.

White had a budding social life, joining other young people at the movies or rollerskating rink and attending dances. After graduating high school in 1947, she returned to the Pleasant View area, where she met her future husband, Gene White, who was just back from serving in the military. On her 17th birthday, they ran off to Aztec, N.M., to get married (sneaking out through the window), as New Mexico state law allowed young people to wed at 17 there.

The next morning, White was out with her new husband, driving a tractor and thrashing beans on his property, a homestead farm site in the neighboring community of Sylvan that had been in his family since 1918. Although the original cabin has been moved a few times and undergone remodeling, White lives there to this day.

In the 1980s, the option to irrigate in Sylvan became a reality with the construction of McPhee Reservoir by the Bureau of Reclamation. This would mean that farmers could plant a more diverse range of crops in greater quantities, and not be so dependent on rainfall.

At the same time, irrigation constitutes significant added expenses, from fees to the federal government to farming-specific costs like fertilizer. White’s brother Junior, who was running the Hollen family farm, initially signed on for the water, but when the cost estimates went up, he changed their minds. The Bureau of Reclamation, though, refused to allow them to back out. So White and her siblings hired an attorney and sued the Bureau of Reclamation for the right not to irrigate — and won.

Their efforts were noted in a New York Times article from 1987.

“We did what we had to do lawfully,” White said.

Economics obviously played and continue to play a role in the decision not to irrigate. But there’s a cultural component as well related to the decision to refuse water, and generational practices and knowledge that keep farmers repeating the patterns of their predecessors.

It’s a changing landscape, though. Climate change and weather patterns are shifting, disrupting standard practices — researchers at Washington State University recently found that while climate change will cause drylands worldwide to expand at an accelerated rate, their productivity will likely be reduced. Offspring have a myriad of other choices and opportunities now, and many opt not to take up the farming mantle.

“As the older people passed away, younger people didn’t take up the farming,” White said. “As the tractors became bigger and bigger, you could farm more land. People just didn’t stay with it. The younger generation.”

White continues to can, jam, garden and sell her products at the Cortez Farmers Market when it runs in warmer seasons, following in the footsteps of her mother. Her sister Velma lives next door and joins her at the market on Saturdays.

White’s son Brad took over farming the family farm, while her grandson Eric farms a few miles away. He irrigates the land.

In co-writing “Bessie’s Sylvan” with John and Sharon Wolf, she hoped to recall the strength of community on the Great Sage Plain, a tradition she holds onto in her own life, in the bonds she maintains with family and friends, and even through her work with the Sylvan Cemetery District.

She describes herself as a “pretty good person” who tries not to judge but rather lead by example.

“You never know when you could be just a drop of influence to turn their life around,” White said.