Navajo Mountain in Arizona emerges as a symbol of beauty and tradition resting on the northern horizon of the Navajo Nation like an indigo ship at sea: graceful, mysterious and remote.

It is a two-hour drive from Kayenta and three hours from Tuba City, the closest towns on the reservation. Yet it is here that the Western Agency Council, composed of 18 chapters of local Navajo government, packed the chapter house early in the morning of June 12 to discuss legislative issues critical to the regional, collective chapter business.

Rising to the top of the agenda was the presentation of candidates running in the August primary.

It was the Navajo Nation presidential candidates that drew the most attention. Six of the 12 declared candidates for the top seat in Window Rock showed up to seek support.

Two are breaking a traditional Navajo taboo — still spoken of, though softly, when their names come up—- that women shall not run for leadership positions in the Navajo Nation.

It was 3 1/2 years ago that Lynda Lovejoy won the primary to campaign for the presidential seat. It was the first time in Navajo history that a woman had won a presidential primary. She lost a tight race against President Joe Shirley, Jr., by only 4,600 votes. She is running again, and so is a new female contender, Sharon Clahchischilliage (pronounced: clah – chis- chilli- azshe).

With web sites listing decades of leadership responsibility, they embody the strong qualifications needed to run for office. They are able candidates, but will the gender taboo affect their campaigns? Not according to Max Goldtooth, Tuba City Chapter president. “I think we [Navajo politicians] have broken every taboo already,” he said.

Goldtooth, a medicine man taught by his grandfather, Cowboy Begay, a wellknown Hatathli, says that he does abide by tradition and must uphold the appropriate teachings. “But the taboo issue has gone a little too far, like an excuse in Window Rock. I’ve worked with many women in highranking positions here on the reservation and Washington, D.C. They are informed, capable and know the issues.”

‘A worker for you’ 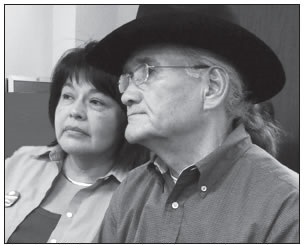 Sharon Clahchischilliage opened her remarks at the Western Agency Council meeting with, “I will be a worker for you. “We need to decentralize the government, get a facelift, go on a diet, streamline the bureaucracy.”

Clahchischilliage, born in Farmington, N.M., in 1949 is Todik’ozhi, born for Kin lichii’nii. She is married and has two daughters, three sons, five granddaughters, and one grandson.

She was raised in Gad’iiahi, west of Shiprock, N.M., where her aspirations for a career in public service were encouraged by both her grandfathers, who were former Navajo Nation chairmen.

“Leadership was always present in my thoughts. I was raised with very strong men and women. It never crossed my mind that one gender was superior to another.” She watched politics in Window Rock from her grandfather Sam Adkeah’s lap, the baby in the council chambers, where she says she felt the power of the responsibilities “we need to return to today. We keep tending to the pathologies of the people instead of the advancement of our people.”

Clahchischilliage believes the current situation of the Navajo people and the government is critical. “We need to get through this with leadership based on a professional level of experience and a look through the reality lens at the honest experience of being Navajo.”

Sam Adkeah was the Navajo leader in 1946-1954, when the value of natural resources such as coal, gas, oil, and uranium was just being discovered. Clahchischilliage said her grandfather admitted he didn’t have the skill to get the job done, then went out to find professional help protecting the resources. “Then he made sure everyone knew what was going on. It was transparent.

“Today all the stagnation and pending contracts with Peabody coal, Gray Mountain wind, Desert Rock, abandoned uranium mines, Navajo Generating Station and Arizona Public Service are leaving the local people out,” said Clahchischilliage. “The voice of the Navajo people is not included.”

Clahchischilliage said she launched her campaign on the concerns identified during her nine years as executive director of the Navajo Nation Washington Office. “Officials in Window Rock are afraid to go to the chapters because nobody’s been listening. Nobody’s in the grandstands for the people there.”

She wants to mend the rift between the government and the people. “I managed my staff of eight people with the philosophy that the message is filtered down to everyone. All of us had to know what we want as a goal in order to accomplish the tasks we were charged with. I will be the people’s president. And be out in the community for them.”

While working in Washington, D.C., she learned that timing is everything. “Obama wants to modernize. This is prime time to jump on board, to end the fighting among ourselves, work together. The clock is ticking and no one in Window Rock is looking at the big picture. We need people in key positions who understand the level of information that supersedes their experience and are not intimidated by it.”

As a result of her efforts, the Navajo Nation is included for the first time in the 2010 national budget. She is responsible for “pushing and marketing to the Navajo government” as well as “explaining how to be pro-active, how to get into the national budget, work with Congress, the administration, know the different political seasons, when to do different things.”

Her web site details a professional and academic career spanning more than 20 years. Working at home in public health service, she focused on substance abuse and recovery, children youth and family counseling. She has been a special education teacher in the Albuquerque Public Schools, Bernalillo Schools, and Farmington School District, and a guidance counselor at the Southwestern Polytechnic Institute. 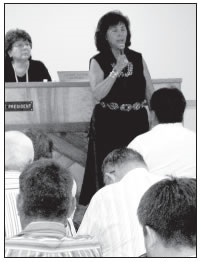 Lynda Lovejoy is a seasoned pro. Now in her second bid for the Navajo Nation presidency, she is confident her assessment of needs will meet the standards of change the Navajo people have wanted for a long time. “I received 30,000-plus votes three and a half years ago in the presidential campaign. Since then the caliber of candidates and dysfunctional government hasn’t changed and we still have disenchanted people unhappy about the gridlock.”

Although some naysayers continue to bring up her gender, she said, “In fact, women already hold leadership positions. I have been serving the people for over for 22 years now. It is not an issue.”

Currently a N.M. state senator representing District 22, she serves there on the Indian and Cultural Affairs Committee, and the Corporations and Transportation Committee. “It was a very difficult choice for me to run a second time. Should I win, I will have to give up the seat.”

Lovejoy and her husband R. John Lovejoy have eight children and seven grandchildren.

She has over 22 years’ experience in lawmaking and negotiations. During that time, she said, “I have represented the people first. I understand your needs very well because I had a traditional upbringing and I know how to compromise and work with people. I already have policy-making experience and have been in the trenches with critically important issues such as tax incentives, renewable energy. I understand the budgeting process.”

The question plaguing many Navajo voters today is the rift between the president’s office and the council delegates. It is no secret that animosity between the two arms of the Navajo government has stalled progress on projects. “We face very challenging times. The council reduction will change a lot in Window Rock,” said Lovejoy. “I want our president, tribal council and all our leaders to come back as a unified body again, as unified leaders.”

She has had plenty of experience in a variety of elected government positions, not only as a state senator since 2007 but also as a member of the New Mexico State House of Representatives, 1988-1998.

She also served as commissioner on the New Mexico Public Regulation Commission, 1999-2006. Her skills landed her the directorship of the Navajo Area Agency on Aging, and she is a consultant for the Telecom/Electric Utility.

“My familiarity with administrative practices has taught me that you need to know what people are doing internally. You have to plan, execute and follow through. Hold people accountable. This is a great weakness in our tribal government.”

Lovejoy is clear about the long-term gain for the people if natural resources are managed properly. “We are abundantly rich in tribal resources. If we hold to accountability and use them in the right way, they will benefit generations to come.”

She added that a leader must always have a plan in hand. “You are the front person keeping the people inspired, even the tribal council. You have to work to get them to see the logic and reasoning, thinking and planning with them.

“I am the first to admit we must keep the communications open.”

Complicating the election process this year are two challenges. President Joe Shirley, Jr., wants to run for a third consecutive term, defying the two-term limit. However, a hearing officer with the Navajo Nation Office of Hearings and Appeals recently ruled against him.

A second challenge, involving the disqualification of a Red Valley candidate for council delegate, is also in process in the OHA. Both cases could end up in the Navajo Supreme Court, further delaying the printing of ballots for the primary election slated Aug. 3.

The other candidates for president include the other four who spoke at Navajo Mountain: Deputy Attorney General Harrison Tsosie; Ben Shelly, Navajo Nation vice president; Arbin Mitchell, director of the Division of Community Development; and Anthony Begay, chapter official from Mariano Lake, N.M.

After the primary, only the top two candidates will square off for the final election in November. The controversy around gender taboo may be finally put to rest.

“If a woman wins this election, let’s see what happens,” said Goldtooth. “It would not be the end of the world.”