The local offices of the Forest Service and BLM will be ending some aspects of their joint operations as of Sept. 30, but they will continue working together in many ways, according to a spokesperson.

“People hear about this and get excited, but in fact it’s an internal restructuring that most of the public won’t even notice,” said Ann Bond, public-information officer for San Juan Public Lands. 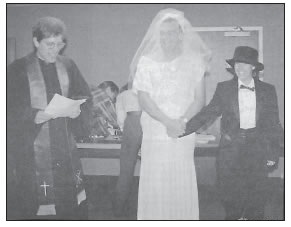 Mike Preston, then Montezuma County’s federal-lands coordinator, “officiates” at a mock wedding between Jim Webb of the Forest Service and Sally Wisely of the BLM in 1994. The wedding was to note the agencies’ intent to share services.

Since 1994, when the agencies joined forces – and celebrated their union with a mock wedding ceremony – the San Juan National Forest and San Juan Field Office- BLM have operated as a Service First entity, meaning they work together to manage the intertwined BLM and Forest Service lands in Southwest Colorado. The arrangement allows them to share skills, equipment and vehicles, thus saving money and providing “one-stop shopping” for the public for things such as firewood permits.

The local agencies have offices in the same buildings in Dolores, Durango, and Pagosa Springs, and have worked together on a revised land-management plan to oversee the San Juan Public Lands.

All that is not changing, according to Bond. However, an internal practice known as “dual delegation” will be ended, which may mean some changes in leadership.

According to a May 26 letter by San Juan Forest Supervisor/San Juan Public Lands Center Manager Mark Stiles, the agencies will have separate managers.

“We have been among the pioneers in agency integration, providing enhanced customer service and coordinated landscape scale resource management,” Stiles wrote. “This integrated approach will continue, but with separate agency managers. We will let you know who these agency managers will be as soon as we finalize our transition plan.”

Stiles wrote that the transition plan “will focus on those aspects of Service First that make the most sense for the land, our employees, and the public.”

Under the dual-delegation system, line officers – district rangers, field managers, and forest supervisors – worked for both agencies. That caused a number of problems, according to Bond.

“Each one is one-half BLM and one-half Forest Service,” she said. “That has caused some internal hassles we’ve never been able to solve, mostly because the two agencies are in different departments of government and use different computers and systems, different time sheets and different travel programs, different rules and regulations.”

The decision to terminate the dual-delegation practice at the end of the fiscal year came from the Region 2 Forest Service office and BLM Colorado.

According to Bond, the Rio Grande National Forest was the only other forest practicing dual delegation.

“The BLM will immediately take steps to fill Field Manager positions on the San Luis Valley and on the San Juan unit,” Cable and Hankins wrote in the memo.

Those in positions of authority have been able to sign both BLM and Forest Service documents and make decisions for both agencies, and that will end under the new system, she said. “The same person won’t be doing both.”

However, the memo said there may still be cross-delegation of some positions such as safety officers or public-affairs officers.

Bond emphasized that the agencies will continue to share many operations. “We’re going to share where it makes sense but not where it doesn’t. We expect we’re all going to be in the same office and the same desks. We don’t think the general public is really going to notice.”

However, people who have other types of dealings with the agencies, such as grazing permittees, will experience a difference, she said. Under the dualdesignation system they work with just one range conservationist who deals with both BLM and Forest Service regulations.

“ That’s been extremely difficult for those employees because we could never merge those two sets of rules,” she said. “So range permittees [operating on both types of public land] will go to two different people.”

She said she does not expect changes in fire-fighting and fuels-treatment efforts. “We’re still working it out, but we don’t expect fuels treatment and fire to change at all.

“We’re going to do our best to make these internal changes not even noticeable to the public.”

According to the nomination letter, which did not identify the nominating entity, the center’s contributions to the Service First concept included work on the 2007 revised land-management plan for local BLM-Forest Service lands.

Under the interagency agreement from June 2005, the nomination letter said, “employees of the San Juan Public Lands Center and its Ranger District/Field Offices are working together as a single team. . . The employees have responsibility (dual-designation for both BLM and National Forest System lands.”