Classic sound: An alphorn will echo as Music in the Mountains takes off

The sun blazes its way to the horizon. Shadows stretch, ready to envelop the mountains. As the breeze blows itself out, wildflowers and grass bow one last time and stop their rustling dance. All is still.

Then an alphorn echoes in the valley, its rich tones reaching out to welcome evening. 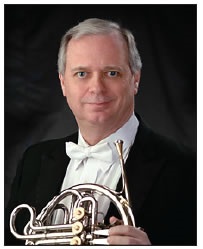 The end of a day somewhere in Switzerland? No, the beginning of a Music in the Mountains Classical Music Festival concert at the Durango Mountain Resort.

Most people know an alphorn from the Ricola Cough Drop commercials, according to Hustis. The instrument’s upturned bell rests on the ground, while the player stands several feet away, blowing through a wooden mouthpiece into a long tube.

Hustis chuckles, remembering. “One of my favorite professional pictures is of Mischa in front of the orchestra and me playing the alphorn.”

Since that concert, people have asked Hustis to play the concerto again. “Now is time to dust it off and bring it out,” he says.

An alphorn is an unusual instrument to find in an orchestra. Originally used for signaling across mountain tops, it was not conceived of as a concert instrument. That Leopold Mozart did so intrigues Hustis.

The father of Wolfgang Amadeus, Leopold “was pretty innovative for back in the18th Century,” Hustis says.

Leopold Mozart employed many unusual instruments and sounds in his scores, including hunting horns, the dulcimer, shotguns, and barking dogs.

While Hustis admits that 18th Century composers often wrote “weird stuff ” by today’s standards, Mozart’s work exceeded the norm even for his time.

Hustis isn’t sure why Mozart wrote the “Alphorn Concerto,” but suspects that a patron wanted it.

Neither Hustis nor musicologists know if the composer intended to perform the piece on an actual alphorn.

“There were lots of sort of in-between instruments made of all kinds of things,” says Hustis.

He imagines that people fashioned early alphorns from animal horns and whatever else they found. “If you lived on the beach 600 years ago, you probably played a sea shell.”

Hustis has two alphorns, one of wood and the other of plastic water pipe. He’ll play the wooden one for the Music in the Mountains concert.

“I think it’s beautiful visually and as far as the sound it makes,” he says, adding that William Hobson, a horn player in the Calgary Philharmonic, built the instrument. Hustis considers its tone superior to alphorns he’s played in Switzerland, and much better than his plastic one.

The wooden horn produces what he describes as a pastoral sound based on a simple chord progression. Occasional notes sound out of tune because they do not belong to the instrument’s normal harmonic overtone series.

Hustis believes Leopold Mozart’s concerto will appeal to the Music in the Mountains audience because listeners will hear something people used for hundreds of years to signal each other. But he warns that concert-goers should not expect virtuosity from the alphorn.

”You can’t play ‘Flight of the Bumble Bee’ on a alphorn.” He chuckles. “It is a beautiful eerie sound, but you are not there to experience great technical fireworks. That isn’t going to happen.”

When Hustis played the “Alphorn Concerto” the first time with Music in the Mountains, he got a kick out of the experience. He also found frustration.

Most players can hear the sound of their instruments close around them, but depending on the tuning of the alphorn, its sound can be 12 or 13 feet away from the player.

The wooden mouthpiece presents a further challenge. “You’re trying to play with great players and a great conductor, and the instrument doesn’t make the job easier. You just hang on for dear life and go ahead.”

Still, an alphorn is no more difficult to play than a modern horn, which would be as long as an alphorn were it stretched straight.

Getting enough air at Durango Mountain Resort’s 10,000-foot altitude will challenge Hustis, but the alphorn was made for playing in the mountains. He anticipates no trouble bringing off his performance.

In fact, playing the alphorn in a mountain environment excites him. So does using it as part of a symphony orchestra.

His excitement comes from experience. He has played his alphorn in mountain pastures and finds the sound he gets depends on where he’s standing and where the peaks are in relation to him. “It’s more of a nature experience and less of a music experience,” he muses.

Playing quietly in the tent at Durango Mountain Resort and performing a piece designed for the stage will be a musical experience, and he anticipates that his second encounter with this concerto will be a delight.

“It’s like getting reacquainted with an old friend,” he says.

Music in the Mountains, offering orchestra, chamber and conservatory performances of classicaland world music, takes place July 9-31 at different venues around the San Juan Mountains in Southwest Colorado. Tickets are on sale now.

Festival orchestra members are drawn from the ranks of major symphony orchestras across theU.S., and guest artists come from international capitals. Among some of the distinguished guestartists are violinists Vadim Gluzman and Philippe Quint, and pianists Aviram Reichert and DavidKorevaar. Pops Conductor Carl Topilow will return for the popular “Pops Night Benefit Dinner & Concert,” on July 20 at the Festival Tent at Durango Mountain Resort.