Conveying a sense of place

The featured artist at the upcoming Bluff Arts Festival, J.R. Lancaster, specializes in tactile paintings and mixedmedia pieces that capture the essence of the high desert.

So why will his talk during the festival focus on a series he’s done about the ocean, called “Skeleton Coast”?

“This was once the Pacific Ocean,” Lancaster said by phone from Bluff. “Three hundred forty million years ago, the ocean came past Cortez and into New Mexico.

“It’s a cyclic thing, the changing of the ocean to the desert. It’s kind of a full circle.

“And it’s not only showing the ocean. I was able to put many aspects of the desert into this series. In these paintings are many things from the desert — rocks and sticks and rock art.” 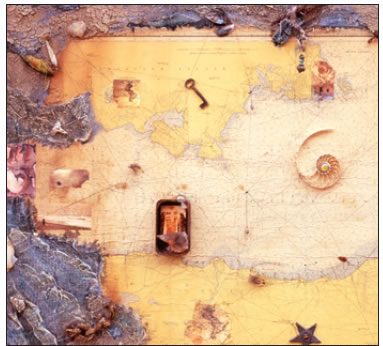 J.R. Lancaster of Bluff, the featured artist at the Bluff Arts Festival Nov. 38-30, will discuss his mixed-media piece, “Skeleton Coast,” during the festival.

The Bluff Arts Festival will take place Nov. 28-30 in various venues around the scenic town. Lancaster will be discussing his work on Sunday morning.

The festival’s theme is the intersection of art and science, and Lancaster is certainly qualified to speak on that topic. Born in the deep South, he worked as a chemical engineer in the 1970s while also delving into amateur photography. He says he uses some of his scientific training in his art today, “coming up with the different materials.”

“A lot of my paintings involve working with natural materials like clay, so I mix them with various synthetic media to get them to bond. The piece I just finished had 15 pounds of clay on it. You have to get it so it adheres to a canvas and doesn’t fall off. You have to know something about marrying materials in a merger of art and science.”

The marriage of art and science is sometimes reflected in his subject matter as well as the media he uses. “I did a series on the spiral form, which is a metaform that shows up in everything from DNA to spiral galaxies.”

Lancaster seeks to give his audience a sense of place that isn’t possible through traditional paintings or photographs. “My paintings have a lot of texture stuff, very organic. There’s a very real tactile sense of the desert.

“I just finished a 4-by-7-foot piece of the San Juan River in a storm. It’s got rocks and things embedded — some of the materials in the field.

“I’m always collecting sand, clay, ant pebbles, tree bark, ash. A beautiful sunset photo can touch you in the heart. These get into you in a cellular level, almost … You can feel them. These things are very much alive. As the light shifts in the house these pieces start revealing different colors.”

The only problem is, he said, people like to pick things off his paintings. “And it’s not just kids. It’s old guys who want to see how I stuck something on,” he laughed. “I don’t want to put a sign, ‘Please don’t touch the art,’ but I don’t know what to do. My work can be repaired, but some of these artifacts are pretty rare.”

Lancaster has always been involved in art. As a boy, he liked to “make little collages — I still do that,” he said. He eventually became a photographer, “trained in the old Ansel Adams-type school, black-and-white, very technical, precise,” then shifted to color photography.

In 1988 he was commissioned by the Navajo Nation to photograph sacred sites for educational books, so he moved to Chinle, Ariz., near Canyon de Chelly. “That’s where I became interested in prehistoric art. When my contract with the school ended, I wandered over this way. I found out San Juan County is the richest place in prehistoric sites in North America, so I moved to Bluff and did the starvingartist thing and spent a lot of time in the field.”

His hiking and exploring resulted in a book, “Dancing at the Edge of Time,” that looks at prehistoric art from a contemporary artist’s view. Editors are considering the book now.

Over time, he has evolved from a photographer and landscape painter to a specialist in mixed-media works and sculptures. Part of that change was because of his own diversifying interests, but part of it resulted from changes in the environment itself.

“Fifteen years ago, I was still doing a lot of large-format landscape photography and paintings, but my interests have shifted,” he said. “Plus, the landscape has changed so dramatically, especially the atmospheric conditions.

“To get the pristine sunrises and clear vistas with all these coal-fired power plants, it’s almost impossible.”

He does some digital photography, but is thinking of beginning to shoot with vintage 8×10 film cameras. “It teaches you about composition, the discipline of looking. It slows you down,” Lancaster said. “As opposed to take 300 pictures and using PhotoShop and saying, ‘That works’.”

Concern for the environment is a theme that runs through his works. For instance, the Skeleton Coast series employs historic nautical maps as well as hundreds of items collected from beaches. “You can smell the diesel off the maps from the boat [the fisherman] was using,” he said. “And the things that wash up on the beaches — some are plastic doll parts, broken glass. It shows how we’re trashing our oceans.”

Lancaster’s wife, Krisanne Bender, shares his environmental concerns. She is president of the Canyon Country Heritage Association, a group that focuses on issues surrounding off-highway vehicles.

In addition to their home in Bluff, they own 20 “extremely remote” acres near Dove Creek, Colo. Lancaster enjoys the contrasts between Bluff and Dove Creek. “Dove Creek has a very peaceful female landscape of sunflowers and rolling hills,” he said. “In Bluff, there’s a more aggressive male energy in the desert and canyons.”

At Dove Creek, Lancaster has been hauling in pieces of monolithic quarried rock to assemble into a giant “fractured fairy tale” that will have a waterfall or stream running through it. The huge assemblage is partly for their own enjoyment, partly to attract clients. “It’s kind of an adventure. I’m pushing the outside-art thing. I’m entertaining the hunters and the farmers, for sure.”

One farmer who has been in Dove Creek 77 years invited Lancaster to his “farm-implement graveyard of the last 50 years” and told him, “That is yours.” Now Lancaster has a plethora of heavy-metal implements and big chains to use in his assemblage.

The only problem is moving the things to where he wants them.

“I’ve got a rock in the back of my truck now that weighs 1200 pounds,” he said. “I keep thinking I should have done this heavy sculpture when I was younger.”