Debating the cost of coal on Black Mesa

Answers from the audience at the Hardrock, Ariz., Senior Citizens meeting hall began with, “Five!” Then someone offered, “Three,” and finally someone in the back called out, “How about just one in today’s economy?” 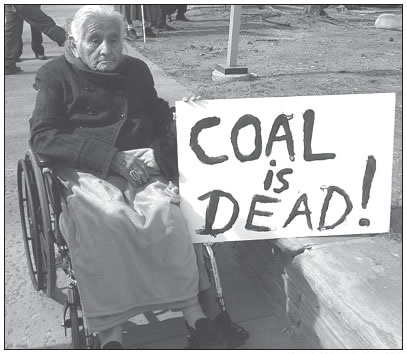 The question, posed by Milton Bluehouse, Sr., a former president of the Navajo Nation, drew attention to details in the current royalty-rate negotiations between Peabody Western Coal Company and the tribe.

The scholarship offer increases the existing $186,000 per year available to qualified Navajo students. Hardrock Chapter, in the Navajo Nation just north of Hopi Second Mesa, is on Black Mesa, site of two Peabody mining operations, No. 8580 and No. 9910. Residents have organized in response to the Peabody lease-renewal offers. Peabody’s leases come up for renegotiation every 10 years.

The royalty rates on both leases are fixed at 12.5 percent. If and when the Navajo Nation Council approves pending legislation, it would permit the Peabody mining lease until 2016. In addition to the scholarship increase, the offer adds a $1.55 million one-time signing bonus and another bonus of $3.5 million per year for 10 years on both leases.

But local grassroots organizations want in on the negotiations and are pulling together at meetings like those held at Hardrock during March. They want the consequences of coal-mining operations in their own back yard to be known and they want remediation compensation and revenue. At all of the meetings residents tell of respiratory diseases, relocation trauma, and social, emotional, and physical concerns and poverty that, they say, is the result of living in the communities beside the coal operations.

Peabody has been operating the two mines, Black Mesa Mine and Kayenta Mine, for more than 40 years. The Black Mesa Mine has been closed since the Mohave Generating Station in Nevada, which utilized that coal, was shut down because of environmental concerns in December 2005, but the Kayenta Mine is in full operation. Peabody is seeking renewal of both leases because the company is hopeful of finding another buyer for the Black Mesa coal.

Norman Benally, leasehold resident, passed out a prepared statement in which he wrote, “It has been more than forty-five years since the original leases… In that time much of the surface and ground water has been polluted by Peabody. This was never a part of the original lease agreement.

According to the elders Peabody proposed they would leave the land in better condition than they found it. In our view that has not been the case, even as it applies to natural springs and the Black Mesa aquifer. Today more and more people are hauling water for livestock, crops and household use. This should not be the case considering all the drinking water that has been used to slurry coal to the Mohave Generating Station and coal revenues sent to Window Rock [Navajo Nation Government] and not allocated back to the communities impacted the worst from the Peabody mining activities.”

Milton Bluehouse Jr. said, “We recognize the divisive nature of the coal company. We should all own a common theme.”

The groups, including Black Mesa Water Coalition, Tonizhoni Ani and Dine CARES, meet regularly at Hardrock to discuss ideas for reclamation, compensation and strategies that will include local community input in central-government negotiation procedures.

A possible outcome of their success, however, could be that the Navajo Nation would not agree to terms in the Peabody negotiations legislation. In that case the tribe could be liable to pay back $3.5 million already in the Navajo coffers from Peabody payments while risking the loss of $36.5 million from the current lease period in question running through 2016.

On April 1, the Navajo Nation council met in a special work session to discuss the legislation sponsored by Council Delegate George Arthur (T’iistoh Sikaad/San Juan/Nenanezad), chairman of the Resources Committee. People from the grassroots organizations expected they would be given an opportunity to address the council at that session. Tonizhoni Ani (Beautiful Water Speaks) representatives Nicole Horseherder and Marshall Johnson, and Wahleah Johns, field director of Black Mesa Water Coalition, waited in the audience.

But the citizens’ group line-up at the lectern included only Kee Yazzie, a member of Black Mesa United, Inc., and Phil Russell, a representative of United Mine Workers of America, which represents Peabody employees on Black Mesa.

Additional presentations were made by a representative of Peabody Coal Company, and Arvin Trujillo, executive director of N.N. Division of Natural Resources, Attorney General Louis Denetsosie and council delegate George Arthur, all members of the Renewable Energy Task Force.

It was a disappointment for Johns, Horseherder and Johnson. “We have a right to be heard,” said Johns.

At the meetings prior to the work session, the groups had done their homework. Marie Gladue, a resident of Hardrock, hosted the meetings inviting Elisabeth Holland, a scientist working in the Atmospheric Chemistry Division at the National Center for Atmospheric Research since 1989.

She focused her lecture on global warming trends, showing evidence that the scientific community agrees is contributing to real global warming and that emissions from coal-fire power plants are affecting the Black Mesa regional environment..

An energized group of youth activists worked beside their elders describing a vision of organic local gardens, Navajoowned businesses, preservation of language and culture, no harmful chemicals or genetically modified synthetic products, recycling in every home, green jobs, renewable energy, no foreign businesses, no cornbased industries, and no multi-national corporations. They want a farmers’ market, wellness and continuation of livestock and the traditional Navajo lifestyle.

Within two weeks another meeting was held. Attendance was growing as word spread that the groups want to be heard in Navajo Nation Council decisions affecting their local communities.

Llouis Benally, a board member of Black Mesa Water Coalition, said, “The issue is about escalating global climate change and we should transform … from coal to renewable energy instead of being controlled by it.”

Nicole Horserider, Tonizhoni Ani, said, “We need to get renewable energy into the Peabody negotiations in Window Rock.”

There are existing leases and, “money coming from them,” said Tulley Haswood, Rock Springs, N.M. “Money comes from the mine.

“We’re stuck with the leases and don’t have money for renewables. We should go for the 10-year lease while we negotiate for our needs. It’s in our hands. We can go there.”

And so they did. Tonizhoni Ani sent out a call to organize around a four-day horseback ride to the council session beginning at the Black Mesa Pinon Chapter. Only three riders showed up, but as they camped out and rode toward Window Rock, the number of supporters grew. By Sunday, April 18, the day before the council’s spring session was due to open, 50 to 60 people joined them at St. Michaels, Ariz. 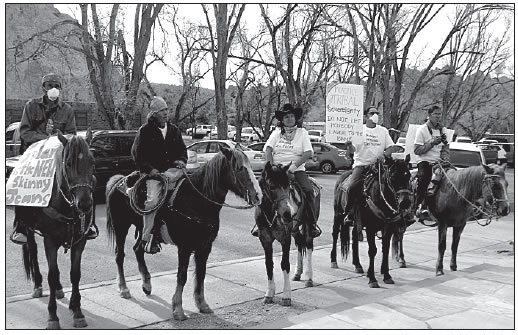 Riders, some of whom traveled 100 miles, protest outside the Navajo Nation Council’s opening session in Window Rock, Ariz., on April 19. Photo courtesy of Wahleah Johns

Johns, field director for BMWC, said, “It was our intent to educate the people about the Peabody leases, gather support and create a platform for the inclusion in negotiations, and build a presence, a smooth transition [from fossil fuels] and support for renewable-energy projects.”

People used the day to make signs for the march. They silk-screened T-shirts, vented opinions and, “told the stories about dealing with a legacy of 40 years where we have not included people from the communities,” said Johns. “We have invited the Natural Resources Committee to our community but they’ve never sent anybody out to our meetings.”

Monday morning, approximately 75 people from Black Mesa met at the Wells Fargo bank in Window Rock to march on foot and ride on horseback to council chambers.

“We had a presence,” Johns said. “I don’t think they expected us in such numbers. Finally a few came out to talk.”

George Arthur stayed outside almost 45 minutes listening to the concerns. “It was really powerful. He promised the group that they will hold community hearings out there [Black Mesa],” said Johns.

During the demonstration, grassroots leaders learned of legislation sponsored by Forest Lake (a Black Mesa chapter) Council Delegate Amos Johnson. It introduces amendments to the Navajo Nation Code Title 18 procedures on mineral lease permits to include community input. The amendments would strengthen involvement of chapters in the approval of mineral permits, including a requirement to conduct public hearings at the affected chapters prior to the consideration of resolutions approving mineral, carbon-based, or renewable-energy operations.

“Basically, it pushes the chapters to have more input all over the reservation, not just Black Mesa,” explained Johns.

In an telephone interview with the Free Press, delegate Johnson said his resolution ultimately failed. “It passed Resources Committee on March 29 and then went on to Ethics and Rules on April 2. From there it went before the spring session of the council, where it did not pass, 19 to 45. It is dead now, but this amendment to Title 18 needs to take hold nationwide as a grassroots effort. I haven’t heard of anyone volunteering to do the footwork. Maybe now it has opened the eyes and minds of the people.”

“The problem with the legislation is that he didn’t communicate with us that he was submitting this — again leaving us out of the input,” said Johns. “Our message was pretty clean, we make a presence and are vigilant about it.”

Johnson admitted that he, too, heard from the people at the rally in Window Rock. “They gave me an earful. I told them they need to go read the legislation so we do not have misunderstandings.”

Black Mesa Water Coalition and To Nizhone Ani are collaborating on a solar project located on the Peabody Coal reclamation land. They are seeking funding from Navajo Nation royalties from the mining operations to build a solar plant modeled after the Nevada Solar One project, based in Boulder City, Nev.

Horseherder explained that the Nevada Solar One project was chosen because it is a comparable land base and the size relates to the Peabody reclamation site.

According to the Solar One web site, the Nevada project is a utility-scale power, 400-acre, 64-megawatt plant harnessing solar energy to power more than 14,000 homes every year. It is the third-largest concentrating solar power plant in the world and the first such plant built in 17 years.

With space still available in the transmission lines near Black Mesa, the groups hope to create a green economy on Black Mesa.

“Peabody Lease re-opener is an opportunity to push for a large percentage of these funds to develop this project and solar manufacturing, installation, education and green job training,” Johns said.

A low-carbon, green economy is closer to becoming a reality in the Navajo Nation. BMWC mounted a successful campaign to legislate for a Navajo Green Economy program. It passed in tribal council on July 21, 2009, after a strategic lobbying campaign which included peaceful demonstrations and marches on Window Rock, and support from organizations such as the Grand Canyon Trust and Sierra Club.

Johns has subsequently been appointed the first commissioner of that program. When the legislation passed, Johns said, “The United States really needs to stand behind our tribal nations that are adopting green-jobs legislation.

“Green-job development is something we are used to as indigenous people. We always talk about being green, about the caretaking of Mother Earth, and so that’s always been the message. I think passing this legislation really proves that.”