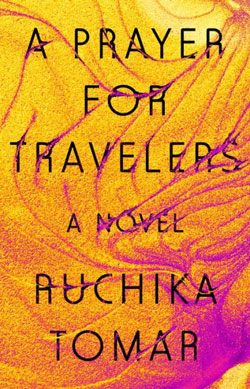 Ruchika Tomar’s debut novel, A Prayer for Travelers, is one such work. Initially set in a remote desert town somewhere in the American West, it tells the story of Cale Lambert, a high-school senior whose quiet introspection renders her socially invisible, her tremulous light eclipsed by the bright incandescence of a quartet of cool-girl classmates led by Penélope Reyes, aka Penny, the clique’s beautiful, enigmatic ringleader.

After graduation, when Cale lands a job at the local diner where Penny is waitressing, the two young women forge an unexpected and, for Cale at least, dizzying bond of friendship soon sealed in blood by a sudden act of violence. The inscrutable Penny, it seems, has a darker side than any Cale had imagined – one involving drugs, multiple seductions, and a freezer full of cash. Then Penny vanishes without a trace, leaving her cell phone and her cash behind, prompting Cale to embark on an odyssey of discovery – to find her missing friend, to fathom her motives for fleeing, and perhaps to discover herself in the process.

The story that follows, related through Cale’s increasingly-jaundiced perspective, is compelling enough in its own right – a cross-desert road trip through the gritty circumambient of trailer parks and truck stops, strip clubs and Indian casinos, with Cale out front and the local police chief lagging behind. But then Tomar takes her tale to another level entirely by scrambling the book’s chapters such that 2 follows 31, for example, and 52 follows 79. The resulting disorder mimics the disorderly nature of Cale’s comingof- age, and while somewhat distracting at first, it proves anything but random, becoming instead an essential element of the novel’s narrative magic, hurling the reader forward and backward in a way that deftly builds tension while depositing clues like so many breadcrumbs leading Cale – and us as readers – to her final and fateful destination.

Author Ruchika Tomar has a gold-plated resume for a debut novelist – a BA in English literature from the University of California Irvine, an MFA from Columbia University, and a Stegner Fellowship at Stanford University, where she is currently a Jones Lecturer. And while her writing fully reflects this pedigree, combining tightly wrought prose with deeply-realized insights, the book’s noirish settings and brisk pacing elevate A Prayer for Travelers above the already-lofty realm of “literary fiction” into that rarest of belletristic strata, that of the Damn Good Read.

“I pulled Penny’s phone from my pocket and tried powering it on, looking around the kitchen as if a power cord might appear, or Penny, some useful explanation. But the phone was dead. I tried to remember if I could ever recall Penny with two phones, if this could have been a duplicate. The sick feeling grew, the omniscient gray vapor rolling low and sinister through the halls.”

As for the book’s anachronous chapter order, I’m reminded of another novel reviewed in this space several months back, The 7 ½ Deaths of Evelyn Hardcastle, in which author Stuart Turton tested the boundaries of narrative structure to much less useful effect. In contrast, A Prayer for Travelers ($27, from Riverhead Books) disorients and delights in equal measure, in a style reminiscent of that rarest of Hollywood offerings, a Quentin Tarantino film. And that, my friends, is a tasty burger indeed.

Chuck Greaves/C. Joseph Greaves is a member of the National Book Critics Circle whose sixth novel, Church of the Graveyard Saints (Torrey House) will be in bookstores in September of 2019.