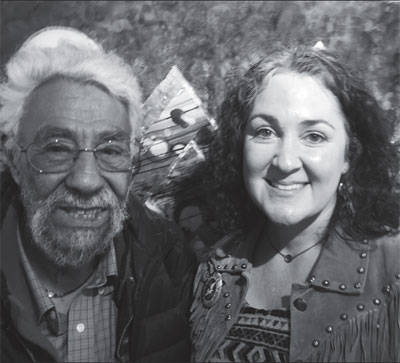 TALKING GOURDS … What a great crew we had at the Fischer Prize/ Cantor Award poetry awards ceremony of LitFest6 the other weekend …Talking Gourds co-director Rosemerry Wahtola Trommer teamed up with her Emerging Forms podcast co-host Christie Aschwanden for a live broadcast on the subject of Literary Prize Contests … Daiva Chesonis did a powerful dramatic reading of the late Ettore Rella’s “Onorina Rudelat/Immigrant Woman” from his book The Scenery for a Play and Other Poems. Rella was born in Telluride and a number of his relatives (the Bardwell family) came to hear him honored. The poem itself turns on picking mushrooms on the Telluride hills, the book being published the same year as the Telluride Mushroom Festival came to town … Luis Lopez of Grand Junction was honored as the fifth Western Slope Poet Laureate, following on the heels of David Rothman of Crested Butte. His poems reflected on life here on the Western Slope, where Lopez worked not only as poet and publisher, but as a driving force for poetry in Mesa County, and included gently humorous tales of growing up in Burque (slang for New Mexico’s largest city) … Elaine Cantor Fischer’s brother Sheldon Cantor gave out the annual prize for the best Colorado poet in the Fischer poetry contest, and judge Rafael Jesús González chose Dolores poet and professional counselor Renee Podunovich of Montezuma County. She was ecstatic, and read her “most vulnerable poem,” as she put it, which she really didn’t think would win: “The Poet’s Broken Heart.” Here’s an excerpt:

And at the end of the therapy hour,
I pack up this picnic of my own undoing
and tonight
when the moon is full,
I will walk into the desert,
find a certain place on red earth
where the moonlight is lace and ethereal,
will nurse my own wounds,
take this overworked cardiac steak
in my bare hands,
lift it so that moonlight bites
and stars alight on scorched surfaces,
and the words will pour forth from me,
because by the sheer will of my art I will be raw again.

MUSHROOMS AS MEDICINE … Colorado’s Front Range news media had egg on their faces as several outlets in the Mile High City wrongly projected Initiated Ordinance 301 as having lost on voting day last month, only to have the last-counted ballots turn that projection on its head. The ballot measure passed by a slim margin, but it passed … Decriminalization of psychedelic Psilocybe spp. of fungi means that Denver police within the city’s jurisdiction will not go after mushroom users, unless usage or sales falls into their laps. … It’s a first step in working towards legalization – a path similar to the one another valuable medicinal, Cannabis spp., took to change hearts, minds and legislation. Both have been outlawed for many years based on unscientific reasons … As Dr. Matthew Johnson, an associate professor of psychiatry and behavioral sciences at the Johns Hopkins University School of Medicine — and one of the authors of a study last year recommending that the Food and Drug Administration reclassify the drug to acknowledge its potential medical uses and relatively low potential for abuse — told the New York Times in May, “Psilocybin is not addictive, and ‘there’s no direct lethal overdose’ of the drug on record.” Which is to say, coffee and aspirin are more dangerous than psilocybin, the active entheogen in magic mushrooms. Of course, that scientific fact didn’t deter failed Drug War crusaders from outlawing it for decades … However, recent research from John Hopkins and other venerable medical institutions are putting the lie to that law. And in Telluride, the local Mushroom Festival has been educating folks to the truth about magic mushrooms for decades – they are powerful medicine. That’s what Dr. Emanuel Salzman, founder of the Telluride Mushroom Festival that’s now in its 39th year, has been saying forever. We shouldn’t be outlawing psilocybin, but figuring out safe protocols for its use … And those of us who cut our political and social teeth in the Sixties have always thought the law wrong and stupid. And have largely ignored it – though at substantial risk to our safety and well-being … So, the Denver vote is an historic moment in the history of mushrooms in this country. The federal FDA/DEA’s anti-mushroom crusade has been an emperor parading around without the clothing of accepted science, and Denver has just called them on that … However, decriminalization is not without its downsides. As an interim political measure, it’s a sound strategy. But as a social situation, it’s fraught with potential dangers … Psilocybin is not the same kind of compound as THC, and the effects on users can be ego-shattering. Dr. Andrew Weil, a leading national medical authority, has always insisted that attention to dosage and careful choice of set and setting were essential to having a good experience with magic mushrooms, as well as having a guide not under the influence of psychotropic substances. The fracturing of one’s ego structure can be a traumatic experience, and having a trusted friend to reassemble reality for one in a discombobulated entheogenic state is essential, especially for first-time users … Magic mushrooms aren’t recreational for most folks (although some long-time users accustomed to their effects use them so). It’s a spiritual/psychological experience that takes one to the edge of one’s known world, and back (if one has paid attention to dosage, set & setting and a guide) … Trying them on one’s own, especially at first, without attention to suggested guidelines is not recommended. But you know, with the recent decriminalization in Denver, that’s exactly what inexperienced people will likely attempt. And similar to the increased “freak-out” hospitalizations for overdoses of cannabis when it was legalized, I expect a similar spike in hospital visits will attend this mushroom decriminalization … Indigenous cultures had “coming of age” ceremonies and rituals for use of entheogenic substances. In our modern society, we’re unfettered by tradition and free to try anything. And that freedom, while highly valued, can get us into trouble … While I applaud the new Denver law, I think in addition to a commission to study the effects of decriminalization, there ought to be some kind of medical/psychiatric center/call line set up to help with mushroom freakouts. And a safe space and appropriate treatment facility will be needed for those that experience ego-shattering and have taken too much, or are in the wrong setting, or find themselves trapped in a negative space, or are without a helper to assist them back to our consensual reality … So Denver’s vote was a great victory for science and society, the first step in a path towards recognition of psilocybin as medicine. But it’s important to realize it’s also just a stop-gap measure that could have some negative impacts on the unwary or the unwise.

In my mouth,
morning glory flowers
Full of raindrops
Until a nearby canyon wren
Brings me to my senses!