What’s coming out of the closet? The Land of Enchantment’s best attire, for the exhibit “Fashioning New Mexico.” 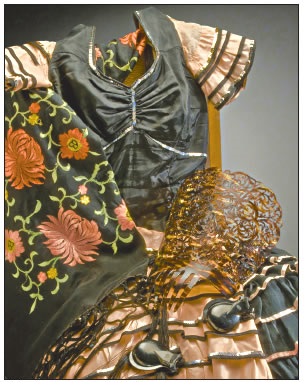 This flamenco dress is one of the many items from New Mexico’s past that are part of an exhibit of historic fashions at the newly opened New Mexico History Museum in Santa Fe.

And to fete the ordinary citizens who became part of New Mexico’s history as they dressed to commemorate births, marriages, graduations, first communions, military accomplishments, and anniversaries for the past 180 years.

“Fashioning New Mexico” shows off the best of 4,000-plus costumes in the collection of the old history museum, the Palace of the Governors. Begun in the 1850s and later donated to the Palace by the Historical Society of New Mexico, the assemblage represents the clothes people wore for their special occasions from the 1830s to about 1970.

“We’re one of the few state museums to focus on that,” explains the New Mexico History Museum’s senior curator, Louise Stiver. She adds that other institutions emphasize fashion design and designers, not the people who wore their creations.

Unfortunately, visitors to the Palace of the Governors have not been able to see most of its textiles, or learn about the people who owned them, because of the Palace’s limited display space. The new history museum offers 96,000 square feet in which to solve that problem.

Stiver selected about 350 costume and accessory pieces that had interesting stories for “Fashioning New Mexico.”

“I tried to really pick clothing that was identified with particular people or to particular families here.”

The show includes a boy’s first deer dance costume, children’s sailor suits, fiesta dresses, a brocade wedding gown with a long train that came west with the grandchildren of the woman who wore it in Brooklyn in 1882, and a yellow flapper dress that belonged to an artist who dared run off to Paris to sculpt in the early 1920s when most women stayed home.

“A lot of people think New Mexico was sort of remote by European standards. But in fact, people were really quite fashionable,” Stiver says. “Some of the fabrics they imported were quite fabulous.”

Long-established trade routes allowed New Mexicans access to those fabulous fabrics. Bolts of Chinese silk came to Mexico City via Manila as early as the 1500s. Caravans carried the cloth up the Camino Real to Santa Fe.

In the 19th Century, ready-made clothes rattled over the Santa Fe Trail from St. Louis, where seamstresses knew the latest Paris designs.

“You name the occasion and they had something for it,” Stiver chuckles. “We sure don’t dress like that today.”

She proposes that their elaborate costumes reflected the lives they led. Because women didn’t work outside the home they had time for elaborate social gatherings with strict dress codes, right down to proper underwear. “Fashioning New Mexico” has several samples of undergarments, “because people are curious about what {was worn} under clothing.”

Men and women both wore corsets, though women’s were more elaborate than men’s. Bustles and crinolines molded and squeezed female bodies to fit clothes.

“You can imagine the sheer weight of having five or six petticoats under a heavy wool dress,” says Stiver. “A lot of people in the 19th Century were much smaller than us.”

Fortunately fashions changed when women finally entered the work force. “There was a real liberation in the late 1800s. Their lifestyles could no longer accommodate tight corsets.”

“Fashioning New Mexico” examines that change, as well as the making of clothing and its treatment when not being used. During the 18th and early 19th centuries, families passed special garments from generation to generation.

“That has not changed,” muses Stiver.

Neither has saving certain items: wedding dresses, special children’s outfits — such as for a first birthday — and military uniforms. For some individuals, appearing in the right costume is as important today as it was in 1850.

Stiver began developing “Fashioning New Mexico” for the new museum in 2004. She wrote grants to raise funds for the restoration of many of the costumes, and to provide state-of-the-art storage facilities for them. For 3 1/2 years a textile conservator worked with the New Mexico History Museum staff to prepare the show.

“It’s just been fun to see what we have in our collections,” Stiver says.

She also enjoyed visiting museums across New Mexico and private donors to borrow contemporary items. She particularly liked being able to include textiles from the entire state in “Fashioning New Mexico.”

Until large exhibit spaces became available, objects and artifacts from the Rio Grande corridor and points north represented the entire history of New Mexico. Now, the history museum can expand its shows to include all regions of the state.

Stiver hopes that in “Fashioning New Mexico” she has created an exhibit that makes people think about how New Mexicans have used and worn clothing. Hands-on educational components allow museum visitors to lace up a corset, peek under crinoline, and see how they might have looked in coats and shirts of the last century.

“We’re trying to get people to think about how they dress, and how clothing influences our appearance today and how we think about it.”