Feral but fixed: There is high demand for a local program that neuters free-roaming felines

The United States is home to an estimated 80 million feral cats, sometimes called “community cats,” many living in colonies. In Montezuma County there are 45 known, active colonies today.

Trap, Neuter and Return, a method of controlling feral cat breeding, is designed to reduce feral-cat numbers by providing spay/neuter services. It is gaining increasing traction as a moral and ethical solution to the problem of cat overpopulation. 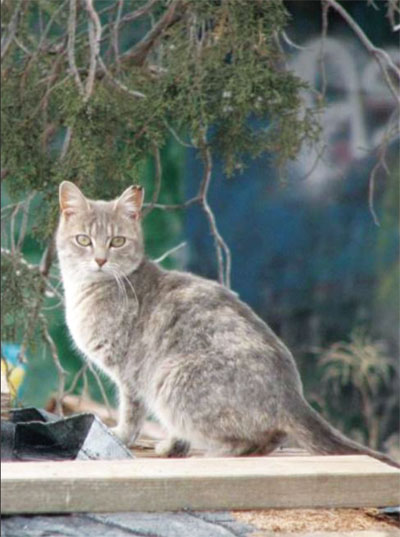 Feral cats such as this one are common in Montezuma and Dolores counties. Photo courtesy For Pets’ Sake.

Since 2009, For Pets’ Sake, a Montezuma County Humane Society, has faced the expensive and heartbreaking reality found in local feral cat populations.

“When we began the TNR project, people would call us for help with a feral colony,” explained Marian Rohman, director of the feral-cat program. “We’d put them on a waiting list because the demand was so intense in the beginning. Sometimes they’d wait for more than a year. People were calling right and left.”

But over the years the project, run entirely by about seven dedicated volunteers, adjusted to the needs of the cats because evidence indicated that neutering helps keep the wild cats from becoming pests – the kittens especially, Rohman said. “They may spread diseases, but they shouldn’t be killed because of that. They should be trapped and treated for the diseases. That’s a healthier approach.”

The TNR program managed by For Pets’ Sake is the primary control program for the feral cat population in Montezuma and Dolores counties. Trained volunteers, and sometimes cat colony caretakers, trap the cats and bring them to a vet for a checkup and the spay/neuter process. For Pets’ Sake funds the medical operation, which costs around $100. Veterinarians treat the cats for any diseases and worms they may have. They prescribe medications the cat may need, including antibiotics. For Pets’ Sake pays the veterinarian for the care and provides the medicine the cat needs to recover.

They are kept until they are healthy and can be returned to the colony. If they are able to adjust to domestic life they are placed in homes or with rescue organizations until homes can be found. Sometimes a lack of placement options forces the return to the wild colony where it was captured.

“At least they won’t breed more litters,” said Rohman. “and we return them healthy. We didn’t have to euthanize them because they are wild.”

Last year the wait time for the spay/ neuter dropped to three weeks or less, a promising direction and a record low. But for some reason Rohman said they don’t understand yet, the wait list is growing. Recent wait time is back up to six months.

Meanwhile, the program has started a Go Fund Me page to raise money to buy a few more traps that will enable it to serve more people and cat colonies. The page is at https://www.gofundme.com/ xt76m-traps-needed-to-save-feral-cats.

In proximity to people

Feral cats are not a new phenomenon. Outdoor cats are part of our history in this country and worldwide. Alley Cat Allies, a global organization advocating for cats, promotes innovative, cutting-edge programs like TNR that can protect and improve the feral animals’ lives. 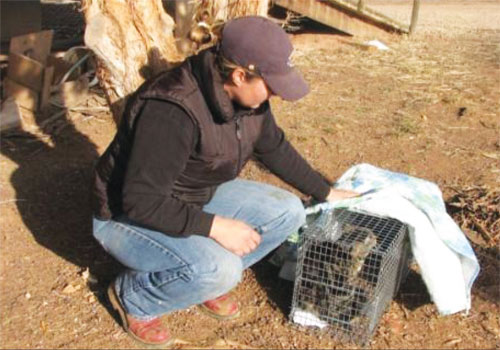 TNR was pioneered in part by Becky Robinson, the founder and president of Alley Cat Allies. “Instead of killing them, it’s about sterilizing cats and letting them live the rest of their lives outdoors. It works for feral cats,” she said in a statement. “It stops the breeding of a cat, so there’s no more litters of kittens. We don’t need to kill them.”

They partner with hundreds of local humane societies to help offer low-cost spay and neuter policies and programs which were once viewed as radical concepts but are considered mainstream today.

According to the ACA website, feral cats thrive in every type of environment – urban, suburban, and rural. They colonized around humans when farming began, about 10,000 years ago, and, the site says, they are one of the only animals who domesticated themselves — choosing to live near humans to feed on the rodents attracted by stored grain.

Evolutionary research shows that the natural habitat of cats is outdoors in close proximity to humans. That is how they have lived, the website says, until the 1940s when kitty litter was invented.

In the last 20 years spay and neuter services for cats have, like litter, become more accessible and affordable. As late as the 1990s, kitten spaying/neutering was not done until the kitten was six months old, around the time it might first go into heat. But today, feral kittens brought into the TNR program are neutered if it is deemed safe by the vet, even if they are only a few weeks old.

Cats live outside for many reasons. For true feral cats (born of females who’ve been making a life outdoors), it’s the life they were born into. Some feral cats live in barns and are valued for their role in keeping rodents in check. Others may be lost, or abandoned by heartless owners.

“People call us with feral cat colony problems from all sorts of places,” said Rohman. “We get calls about domesticated cats being left behind when someone moves or someone in the family develops cat allergies or they found that they didn’t really want that cute kitten after all. They are abandoned, or dumped somewhere. Our area has a serious issue with abandoned cats.”

What people may not realize is that cats want to go home. Even kittens will try to return home to the colony or the domestic family home. If they don’t make it they may die, she explains. Kittens left on their own outdoors have a 20 percent survival rate.

Cortez has four colonies — two in alleys, one in a trailer park and one in an abandoned building. That’s pretty standard for a small town. But in the country feral cats, even the working cats, still need to be trapped and neutered. If they aren’t they’ll breed more feral cats and may spread diseases.

“We cannot save them all, but we give every cat and kitten that comes to us the best possible chance at life,” she said.

The organization has had success with converting lost, abandoned, and even cats born totally feral into contented adoptable housecats. But it’s expensive. The group pays 100 percent of the vet bill, and they also run a food program to help promote healthy cat communities.

“We provide dry food to the caretakers of feral cat communities for a year.

The caretakers must get the cats spayed/ neutered or on the waiting list to get fixed in order to qualify. We provide dry food for a year if they agree.”

For Pets’ Sake spends $1,200 per month on the food program. According to Rohman they currently feed 45 of the 400 colonies they have worked with over the years in Montezuma County. Five of those colonies are being fed by For Pets’ Sake volunteers.

It is quite an accomplishment for a small, all-volunteer group working with limited funds. A few generous foundations add to the coffers.

“The PetSmart Charities were a great help in our early years, and the Friends of the Aspen Animal Shelter has been helping the outdoor cats in our area since 2011 by paying for over 800 spays and neuters. That’s a lot of surgeries and unwanted kittens,” Rohman explains.

In 2017 For Pets’ Sake rescued 96 foster cats and kittens. Eighty-two came from feral cat communities. The work can take an emotional toll, Rohman said. “What you see, you remember. You remember the bad – the sad circumstances. We have to talk with each other.”

In one rescue six adult cats, some who had already been trapped, neutered and returned, were picked up with two mother cats nursing day-old kittens and three more one-day-old kittens without a mother. The colony was left behind when a long-time caretaker died the day before the For Pets Sake team was scheduled to trap the cats. One adult was very sick and had to be euthanized. Two adults were moved to a feral cat colony managed by another FPS volunteer. The rest were treated and neutered, before being sent to other rescue groups around the state.

More than 3400 cats have been treated in For Pets’ Sake’s TNR program since its beginning. It’s a record the group is very proud of, they say in their newsletter, and they are “overjoyed for those we have been able to rescue. This has happened through a lot of hard work on the part of the foster parents and the enormous funding for foster cats and kittens.”

“We are grateful for the funding that comes from grants, but the bulk of the money comes from donations to the Feral Cat Project and For Pets’ Sake through endless fundraising,” said Rohman.

For Pets’ Sake holds fundraisers throughout the year. They include the annual yard sale, (date, time and location to be announced); the Turkey Trot run in November, a Mid-Summer Wine Tasting at Cliffrose Gardens and Nursery, and the annual Animal Art Works exhibit at the Farm Bistro Feb. 10, from 4:30 – 6:30 at 34 W. Main, Cortez.

And yes, there will be a yard sale in the spring, Rohman said.