Golden fleeces: The role of sheep in Native culture

“Her instinct was very strong and she accepted her young with no problem,” says TahNibaa Naataanii of one of her Navajo churro sheep, which became a first-time mom this spring.

Naataanii serves as project director of Diné be’ iiná, Inc., (DBI) an organization centered on preserving the Navajo churro sheep and the related life ways of the Navajo people. 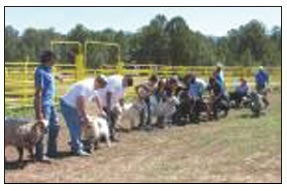 Participants in the annual 2007 Sheep is Life Festival, in Arizona, show off their animals.

Week-long workshops and weekend public programs will “teach (Navajos) to sustain life and further to use their product to bring money into the household and give it added value,” explains DBI President Ron Garnanez.

The Navajo churro sheep resulted when the Spanish brought Moreno and churra sheep to the new world in the 1500s. Morenos had beautiful but oily wool that required water to clean. The Morenos also produced meat, marbled with fat.

Churros had coarse fleece but lean meat that the Navajos liked. One of the earliest domesticated sheep and bred in the desert, churras were also hearty.

The Spanish refused to cross morenos and churras because churras belonged to peasants, and morenos to aristocrats, but the Navajos saw no problem with the mix, producing an animal with the churra’s lean meat and the moreno’s good wool in a double coat, minus the extra oil.

“It was the first North American breed,” says Garnanez. “You don’t have to card churro wool. You can take it right from the sheep to the drop spindle.”

The Navajo churro was also hearty like the churra.

“They bounce back to their wild ways if left alone,” says Garnanez.

Navajo churros have also bounced back from extinction three times when the U.S. Government took them away from the Navajos and tried to introduce new breeds. Weavers saved the churros.

“My grandmother was a weaver and she supplied other weavers with wool,” Garnanez recalls.

He doesn’t know why the ‘a’ in the Spanish word ‘churra’ became an ‘o,’ when the Navajos borrowed it, but he speculates that the ‘o’ comes from the word ‘Navajo.’

At the “Sheep is Life” celebration, participants can learn this history and more as they attend sessions on weaving, felting, butchering, herbal veterinary medicine, sheep related religious ceremonies, and many other subjects.

Children may attend a fiber camp where they will learn about many weaving styles. Public programs will allow visitors to hear lectures on sheep; and wool arts and crafts.

When people tire of talks and demonstrations, they can enjoy an outdoor museum, food vendors, and storytelling.

“Sheep is Life” includes the exhibit “Na’ashjé’ii Biyiin: Chant of the Spider,” a Holistic Journey into Diné Fiber Arts at the Ned Hatathli Museum on the Diné College campus.

“Chant of the Spider” offers its own lectures, panel discussions, and films exploring the interconnected spiritual and technical processes of Navajo weaving.

Fiber artists Roy Kady, TahNibaa Naataanii, and Gilbert Begay will share their personal stories, traditions, and relationships with the natural environment that inspire their creative process and artwork.

Ron Garnanez hopes people who see Chant of the Spider will learn to recognize designs such as the diamond shaped eye dazzler, the box, or the straight line as original to Navajo weavers.

Other patterns like Two Gray Hills or Teec Nos Pos originated with traders, who wanted Persian rugs with a Navajo twist. Garnanez also hopes that by recognizing the differences and learning the history of patterns, Navajo weavers will better understand the design choices they make when they create a rug.

“Sheep is Life” will host a juried weaving show, which replaces the rug auction of previous years. The show setting will give weavers and buyers a chance to meet and talk to each other.

With the auction, with so many weavings coming in and out, they can go through 10,000 weavings,” TahNibaa Naataanii explains. “That type of sale is not part of our Navajo life way teaching. We want to continue the respect of our weaving and where they go from our loom to someone’s home.”

Garnanez adds, “We consider (a rug) as our child; our creation. We want it to go to a good home.”

“Sheep is Life” will also emphasize respect for the sheep by presenting a lecturer whom Garnanez calls “a sheep whisperer.” “Animals can read a person,” he says. “If you learn to read them, you can enjoy each other’s company.”

“The sheep have a special chant. So does the loom and each tool a weaver uses,” Garnanez explains.

TahNibaa Naataanii believes Navajo churro sheep and Navajo weaving have survived because of a strong spiritual connection to the Navajo people.

People hung on to their chants and to this day are still doing them, and DBI serves to reconnect the sheep with the people.”

The connection is strong. Young Navajos have begun joining DBI. The ABC Square Youth Group from Teec Nos Pos serves as the vice president of the DBI board.

“It was so moving when these young people were willing to come,” says Garnanez. He chuckles. “My grandmother — if a coyote killed a sheep, she’d say ‘Well! Now I paid my rent.’ And if a sheep died, she’d say ‘I’ll catch up to you later.’”

He laughs out loud. “At ‘Sheep is Life,’ we want to teach people about that.”