Magnifying glasses to eyes, men and women spread across a field bright with flowers. Someone examines a leaf and makes a note in a black book. Two others huddle and whisper, pointing to something at their feet.

Detectives at a crime scene? No. People on a plant walk botanizing, learning to identify native plants in a Native Plant Master Class offered by the Colorado State University Extension Service. 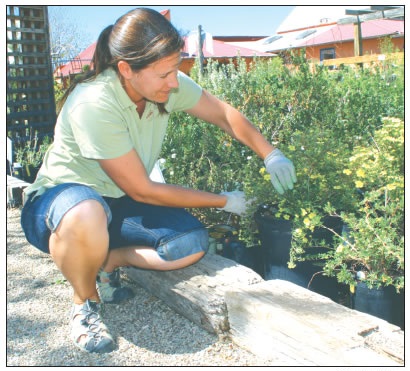 Hannah Lowry of Cortez is a Master Gardener from the Class of 2009. Photo by Wendy Mimiaga

“It is like a detective story,” says Extension Agent Tom Hooten from his office in Cortez. “We sometimes use a hand lens to see details that can’t be seen with the naked eye.”

Hooten defines a native plant as “a plant that has evolved and adapted to the area we are in.”

When the students complete a class, they take tests to demonstrate that they know which plants belong in a particular Southwest Colorado ecosystem, and more important, how to protect that system.

Students will also learn to appreciate an ecosystem’s aesthetics. “The beauty of many of these plants is something that is highly valued,” says Hooten.

Colorado Master Gardeners can help with a broad range of topics centered around home yard care and gardening, including perennials, trees, vegetables, fruit, and turf management.

Native Plant Master classes take place throughout the year on three consecutive Fridays or Saturdays. This month, a class will be held at Priest Lake, near Lizard Head Pass.

Among other things, students learn how botanists use scientific names.

A scientific name has two parts. The capitalized first name represents a plant’s genus. The lower-case second name represents a species. Pears, for instance, belong to the genus Pyrus. Each species of pear has its own name.

Hooten likens genus to a family name. “So if I were a plant and had a scientific name, it would be closer to Hooten tom, rather than Tom Hooten.”

Each step leads to further choices until as long as a half-hour per plant. “It can be very rewarding at the end.”

Once students learn to use a botanical key, they explore the relationships between native plants and imported plants. They must know which imported plants harm the environment and which don’t.

If an imported plant threatens native plants, it’s a weed and must be controlled. Canada thistle and cheat grass, which arrived with settlers and colonists, are prime examples of weeds in Southwest Colorado.

However, not all imported plants are weeds. Imported plants adapting to an ecosystem and becoming part of it are considered naturalized plants. After a time, they can become native.

In Native Plant Master Class, students learn to keep an eye out for new plants. Botanists constantly discover unknown species, and try to see where they fit into an ecosystem.

“Some of that is so complicated that we are just beginning to understand those relationships,” says Hooten.

Native plant ecosystems change over time. Millions of years ago, an inland sea covered Southwest Colorado. Plants today found in the tropics grew along the shore.

Once potential Native Plant Masters understand the ecosystem in the area they are studying, they turn to plant use.

Native landscaping has become popular as a step toward sustainable living. Many nurseries in Southwest Colorado stock native plants. One specializes in plants grown in-state.

“We don’t want people going out in the field and saying, ‘Oh, this is a really cool plant. I think I’ve going to dig it up and take it home and plant it in my yard’,” says Hooten.

Wild plants often don’t transplant well. Also, digging up plants disturbs their environment. Under no circumstances should anyone but a trained botanist disturb rare, endangered, sensitive or threatened plants.

Along with landscaping, Native Plant Master classes examine the role of plants as cover for animals. If a particular culture uses a plant, and someone from that culture is taking a class, instructors encourage that person to share knowledge appropriately. However, the classes do not instruct participants in medicinal uses of plants.