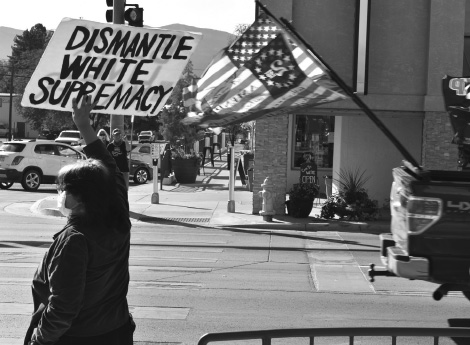 Dueling protests took place on Cortez’s Main Street throughout much of 2020 and into 2021. Six local residents have been charged with harassment for their behavior at a march on Jan. 2 of this year. Photo by Gail Binkly.

The cases against six suspects charged with harassing members of the Justice and Peace demonstrators last January in down­town Cortez are working their way through the court system, but as of press time, none had been resolved.

For the better part of a year since George Floyd was murdered in Minnesota, the Jus­tice and Peace group has been marching and standing vigil in Cortez on Saturdays, their signs calling for love, fairness and other vir­tues you would think would be embraced in what has been called a Christian nation.

Think again. After weeks of their low-key marches, which drew honks of support along with jeers and gestures of disdain, an opposition group calling itself the Mont­ezuma County Patriots began conducting motorized counter-demonstrations. They drove along Cortez’s Main Street, their ve­hicles bearing flags ranging from Old Glory to stars and bars, with myriad Trump ban­ners and some supporting police.

Not content with cruising the street, some Patriots began confronting the peace march­ers on foot, hurling insults at them. The incident that led to charges against six individuals took place on Saturday, Jan. 2. A half-dozen peace demonstrators were stand­ing with their signs on the corner of Elm and Main streets. A 34-minute video of the events shows the demonstrators by them­selves at first, but about 11 minutes into the video, they are surrounded by a crowd of shouting unmasked Patriots, one with a German shepherd. Some of their comments were:

“Are you scared or what?”

Cortez Police Officer Steven King viewed the video and conducted the investigation. After interviewing the suspects, King con­cluded the actions of six people constituted criminal offenses, according to the incident report.

According to the report, when the jus­tice and peace group began walking back to St. Barnabas Episcopal Church on North Street, which is where they had gathered be­fore the march, the suspects and a few other members of the Patriot group began follow­ing them. After they reached the church, the Patriots remained on the sidewalk outside the church courtyard for a time before dis­banding.

Cortez Mayor Mike Lavey later told King that he’d been watching the events and that some of the Justice and Peace march­ers were visibly shaken afterward. Lavey expressed concern about protecting public safety as well as the constitutional right of free speech, according to the report, and said he was particularly worried because sev­eral Patriots were armed.

Lavey told King that after the Patriot group left the church, they confronted him “and began calling him names such as a communist, socialist, trader [sic], a disgrace to the community, and told him he should resign,” the report said.

Gail Lavey, the mayor’s wife, was ac­cused by several of the suspects of “barging through their group” waving a can of bear repellant and a can of Raid, just looking to spray someone, according to the report.

Teitge told King that this had raised ten­sions in the Patriot group and as a result “his mouth got out of hand.”

Teitge also expressed great concern that some of the justice marchers had labeled him and his dog as racist. According to the report, the officer assured him he had no reason at the time to believe this to be fact.

When informed she was going to be charged with harassment, Ghere also repeat­ed the tale about Gail Lavey pointing wasp-killer at her, and said she’d become con­cerned that a Patriot could be injured. Ghere had spoken to the Cortez City Council the Tuesday after the incident and publicly ac­cused Gail Lavey of wielding the spray.

However, it turned out that Gail Lavey was not at the protest that Saturday and was not the woman with the spray. At a later council meeting, Ghere apologized for her false accusation.

The woman with the wasp spray was later identified as Pat Coen, who told King that it was for her protection. Coen acknowledged she had been carrying wasp and bear spray but she denied pointing it at anyone or confront­ing any Patriots. She told King that Ghere had approached her with a “puffed-up chest” and began asking her questions, at one point sug­gesting she move to another town where she would fit in better. After this interview, King concluded there was insufficient evidence to charge Coen, and she was not cited for any violation, according to the report.

When contacted by King several days af­ter the Saturday confrontation, John Ansel­mo, who was not affiliated with the Patriots, at first denied being present at the Patriot gathering on Jan. 2. King pointed out to him that Anselmo had been cited for harassment at a demonstration in Cortez on Jan. 6 and for making threats against President-elect Joe Biden, which caused the Secret Service to be alerted.

King determined Anselmo was not actu­ally one of the Patriots, and others who were said they disapproved of his behavior, such as confronting a man with children. After further investigation by King, Anselmo was positively identified in the Jan. 2 video and cited for harassment. When contacted, Sherry Simmons also told King the false tale that the mayor’s wife had confronted the Patriots Jan. 2 with a can of bear spray on her waist.

Simmons maintained the Patriots’ contact with Mike Lavey was “peaceful,” according to the report, with the Patriots asking him why he was on the side of the Justice and Peace marchers, and him informing them he was on neither side. She accused the march­ers of constantly antagonizing the Patriots. (In fact, the peace marchers remain silent during their demonstrations, letting their signs speak for them.)

Broderick questioned the legality of being video-recorded and said unnamed people had been yelling profanities at his group. He was told to get good descriptions and report this to the police. He was then cited for ha­rassment.

Bracklow was informed his behavior on Jan. 2 constituted harassment. He acknowl­edged some Patriots had used foul language but said others tried to quell it. He admitted following the Justice and Peace marchers to the church.

The six accused are in various stages of the judicial process in county court. All have been advised in court. Some have requested pre-trial conferences with the district attor­ney in late May and others have requested public defenders.

From May 2021. Read similar stories about justice and peace coalition, montezuma county patriots.